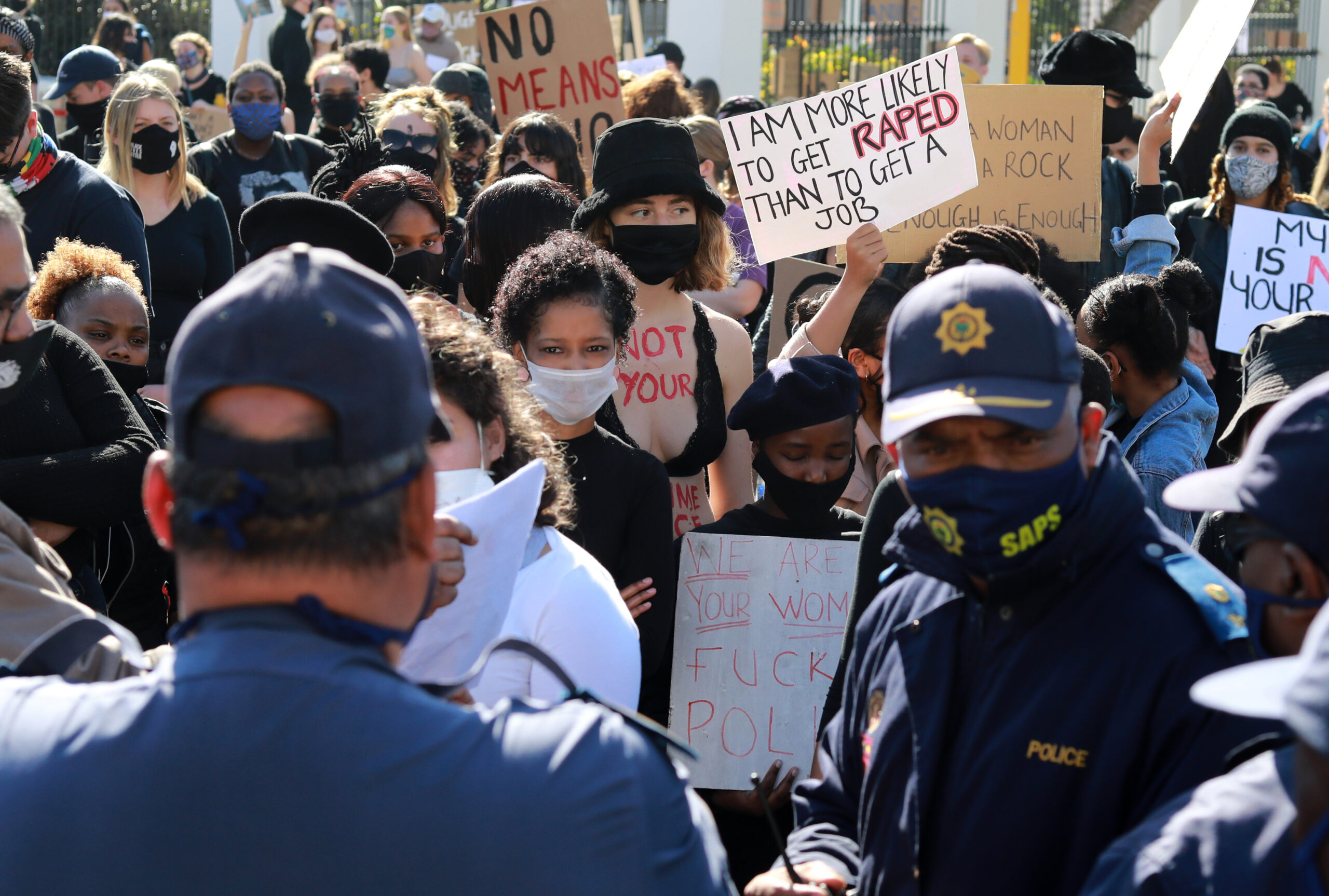 Some of humanity’s most devastating injustices have been overcome by movements that have a strong, unifying voice. From South Africa’s anti-apartheid struggle, to the civil rights movement in the US, people all over the world have continually fought for justice at multiple levels of society.

Although women and gender nonconforming people have contributed significantly to the gains of the racial liberation movements, their plight remains largely underappreciated. But, if we have learned  anything from ongoing struggles for racial justice such as the #BlackLivesMatter movement, perhaps the movement for gender justice needs to be both co-ordinated at a global level and across intersectional contexts.

On 27 March, Turkish President Recep Tayyip Erdoğan pulled out of the Council of Europe Convention, better known as the Istanbul Convention. In short, the manadate of the convention is preventing and combating violence against women and domestic violence. One can only imagine the unsettling effect of the Turkish president’s decision to rescind the country’s commitment to a continental agreement against gender-based violence.

Just two days before, on the other side of the world, Kenyan Radio DJs Shaffie Weru, Joseph Munoru (DJ Mfalme), and Neville Muysa blamed Kenyan women for violence that men inflict on them. Weru and crew subsequently lost their jobs at Homeboyz Radio station, but their sentiments resonate with many people who subscribe to sexist and misogynistic ideals expressed by the DJs on national radio.

In South Africa, we have our fair share of daily reminders that existing as as women and a gender-nonconforming people is a state of constant jeopardy. We have some of the world’s highest femicide and gender-based violence rates. And it is these statistics that have caused us to use our voices to speak out against the scourge of gendered violence.

Historically, gender-justice movements have knocked on doors that have the power to end the violence. We have marched in numbers, across the country, with millions of people watching. But still, apart from speeches and pledges made by our leaders, we have little else to show for our efforts to end gender-based violence in our country.

In February, the Wits Justice Project (WJP) launched a podcast series on women who kill or maim their abusive partners in self-defense. The production of the podcast involved months of research and hours scouring through documents sent by women who have been incarcerated, and those who have merely encountered the criminal justice system, as a result of their experiences of intimate-partner violence.

As we reviewed the cases from these women, we noticed that there was much repetition across the board. There was a pattern of women whose partners had abused and controlled them for years. And men who threatened to kill their partners and their children. But among some of the more concerning findings, were the attitudes of police officers who were called to intervene and assist victims of domestic violence.

In one particular case in the Wits Justice Project podcast series, gender-based violence survivor, Samantha Wade, told us that her former fiancé shot her in the face while she sat in peak-hour traffic. He did this because she dared to leave him after two years of abuse. But this incident could have been prevented had the police taken Wade’s complaint seriously. Just the night before her former fiance shot her, Samantha had reported him for threatening to kill her.

“That night when we went to report it at the police station, I begged the officers to arrest him and take away his guns,” Samantha told WJP.

“One of the officers at the police station said, ‘We get so many statements like this. We don’t have the time for this’.”

Her account of her interaction with the police echoes that of scores of women that reported having sought assistance from the police.

In a well-known 2002 case, Anne-Marie Engelbrecht incidentally killed her husband after enduring years of physical, emotional and sexual abuse at his hands. Like Wade and many other survivors of intimate-partner violence, Engelbrecht had gone to the police many times — only to be dismissed or advised to “calm” her abuser down.

And so, after years of abuse and humiliation, Engelbrecht killed her husband by pulling a plastic bag over his head and suffocating him to death.

The common argument made by society is that the victim of ongoing abuse should just leave their abuser. But where could these women have gone where the abuser would not reach them, particularly without the protection of the police?

In the research process for the Him or Me podcast series, the Wits Justice Project found that this common argument is echoed even by judges of the courts. Most court judgments regarding intimate-partner violence state that women who have killed or maimed their abusive partners should have left the relationship instead of going to the extent of killing their partner.

But this is easier said than done.

For one, Wade’s experience demonstrates just how far an abusive partner will go to retain control over their victim. In her case, the jilted former fiancé attempted to kill her after telling her many times that if he could not have her, no one else would.

In another instance, a woman wrote to WJP about her experience with her abusive partner. Sharlene (not her real name) spent five years in an abusive relationship with her son’s father. When she was finally able to leave him by relocating to a different province for a new job, he plotted to prevent her from leaving.

“He dropped us off at the airport and just when we were entering domestic travels, a group of men in all-black surrounded my son and I,” her letter reads.

“They demanded to check my bag and I let them. But I was very surprised when they pulled out a huge bag of dagga from my bag.”

Her partner had planted the dagga in her bag, alerted airport authorities and even described what Sharlene and her son were wearing. As a result, Sharlene was arrested and spent three days in police holding cells. For the first time in her life, Sharlene came face to face with the failings of South Africa’s detention centres.

“It was the worst experience ever. Firstly, it was extremely overcrowded,” she recalled. “We hardly had any food to eat [and] the food itself was terrible. I chose to go hungry instead. There were no blankets or pillows. I had to trade some of my clothes and the shoes I was wearing in return for a pillow and a blanket.”

Sharlene was eventually released, but the trauma she experienced has stuck with her.

Like Sharlene, scores of women and gender nonconforming people across the globe live with the trauma of gender-based violence. Those who manage to leave abusive relationships often do so with the constant threat of deadly consequences similar to those experienced by Wade.

The reality remains — there is little hope for a peaceful escape for those in abusive relationships. And a significant part of the problem is that the attitudes of society, and those in power, remain largely untransformed.

So when the president of a country that has seen a spike in gender-based violence cases decides to revoke an agreement from a convention meant to address the issue, it sends a bone-chilling message to the country’s women. Especially given that Turkey was the first country to adopt the Istanbul Convention in 2011.

When people with huge public platforms speak in defence of gendered violence, it reinforces the notion that the lives of women are less valuable than those of men. It says the violence that men inflict is excusable and justifiable if their targets do not toe the patriarchal line. It says victims and survivors are responsible for their own actions and those of violent, abusive men.

These public voices undercut the efforts of activists worldwide.

Justifications such as these are similar to those that allowed racial oppression to endure for decades before crumbling under calls for equality.

And so, as civil organisations and progressive movements continue in our collective fight for gender justice, it would be prudent not to repeat the mistakes of the past. The call for equality must mean equality for all — it must be fundamentally intersectional. From there we can build a global movement of solidarity for those facing gendered violence.

The past movements and their experiences shows us that co-ordinated, global unity is far more effective in achieving justice than isolated pockets of activism. From local to regional and international communities, we must strive for justice that is wholly inclusive and global.