The value of life in Palestine

Days are short in Palestine. It is pitch black by 5pm and winter has not yet even solidified over the barren, beige land, scarred with barbed wire and mountains of trash.

Lives are short here too.

At 6pm last night I received a call from a local friend in Ramallah to inform me that Rushdi Tamimi had passed after being shot twice by Israeli soldiers the previous day, and that people were amassing at the hospital in commiseration. Collectively in the bland parking lot of Ramallah Hospital, Palestinians attempted to scrape together some narrative and coherency from yet another meaningless, unaccounted for and unrecorded death.

There were no hot-shot journos milling about with the family over plastic cups of instant coffee and silent weeping. The mercurochrome hospital lobby stood empty as this is not a news-making story. They were chasing rockets and international diplomats. 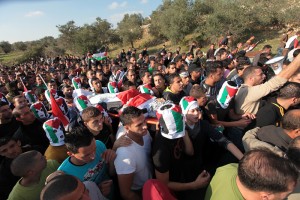 Instead, Tamimi was a young man from Nabi Saleh, a small and impoverished village about 30 minutes from Ramallah. His life has been structured by the checkpoint outside his backyard where 18-year-old bored Israeli soldiers decide who is accorded the dignity of freedom of movement and speech. He never left the West Bank — he had the wrong coloured ID pass, which he carried with him at all times should a soldier, at a whim, demand of Rushdi Tamimi that he provide proof of Rushdi Tamimi.

As Gaza goes up in flames, Palestinians of the West Bank have been struggling against the chains of occupation to do something; to do anything. Ramallah, the “seat of Palestinian power” and Palestinian Authority headquarters is entirely impotent and inert to in anyway protect, serve or even provide for Palestinians in Gaza, let alone intervene to halt the Israeli assault.

At the time of writing, 116 Palestinians have been killed, including the massacre of two entire families in their residential homes, 25 mosques have been targeted, the Gazan media centre has been repeatedly decimated, a school bombed, residential areas targeted, and the central bank in Gaza City destroyed. Three Israelis were killed on the first day of violence.

Gaza is an isolated, overpopulated, impoverished, militarised open-air prison. A large percentage of the overall population of 1.7 million are third-generation Palestinian refugees, who were ethnically cleansed from their homes and villages in the establishment of the Israeli state in 1948. Israel has imposed an inhumane blockade on Gaza since 2006, disallowing the flow of food aid, medical supplies and construction materials among other necessities of life and dignity.

Israel maintains a complete monopoly over the flow of Palestinian bodies here too — no one is allowed out and no Palestinian from the other West Bank territories is allowed in. The “checkpoints” strategically dotted across the country are the gates to the prison and every single one is Israeli controlled, in Gaza and in the West Bank. It is an advanced system of encirclement, suffocation and dehumanisation.

So as the ghastly events have unfolded over the past days, Palestinians here in Ramallah have been bolted to their seats and forced to merely watch the horrific destruction. Moreover, their pain and outrage has been silenced and deemed unfounded by the one-sided media coverage from global media power-houses such as the BBC, CNN and the New York Times. We are informed of Israel’s right to self-defence and the trauma Israelis in Tel Aviv and southern Israel are suffering. What has been occurring in the West Bank has been largely unreported.

In all villages and towns across Palestinian territories protests and marches have been called for daily. It is unclear who really does the initiating and there are multiple sources of mobilisation, including Fatah and the Popular Struggle Co-ordination Committee. As the crowds in town squares and focal points start to thin out, students jump into cheap taxi minibuses called “service” and speed to checkpoints. Armed with nothing but courage, lost youth and burning frustration, they seek to draw out soldiers and create some kind of confrontation.
The balance of force in these events is heartbreakingly uneven. IDF solders are armed with the most advanced military weaponry in the world, and as one can see in this amateur video capturing the shooting of Tamimi in Nabi Saleh, they are “attacked” by desperate children and young adults in jeans and torn T-shirts.

If you think this is utter stupidity — I could not agree with you more. There is no logic to throwing yourself in the line of a force such as this.

But what else do they do? Their brothers and sisters in Gaza are being massacred and they are powerless. Their life in the West Bank is untenable and there is no sure sight of change or resolution. 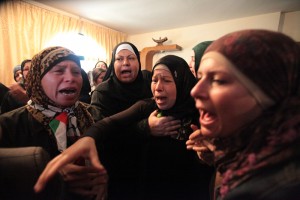 Tamimi’s sister and other relatives mourn

Furthermore, the umbrella Palestinian representative, the PA has been shown over years of the humiliating Middle East Peace Process negotiations to have been entirely outmanoeuvred, outmuscled and economically and politically trumped. The release of the “Palestine Papers” in 2011 show they have been prepared to even give up the demand to address the heartbeat of Palestinian injustices — the right of return of the 1948 refugees.

As cease-fire negotiations are deliberated over in Egypt, not only are lives continuously being taken in Gaza, but in the West bank too: three fatalities have been confirmed and about 50 injuries, several of which are severe to critical. But it is not just the number of actual corpses that is so distressing, it is the lack of value of life here and in Gaza. The sheer incoherency and emptiness of existence is at the apex of the overall crime of Israel’s occupation of Palestine.

So what does peace and political negotiation to end the Gaza conflict 2012 mean in such a context of lifelessness and moral depravity? What is left for Tamimi’s younger brothers when Ban Ki-moon and Hillary Clinton jet out and Israel declares a return to normality? Will their life have value? What kind of “normality” does the world leave Palestinians to cling to?

That’s just it. There is no normalcy here, and Israel should not be engaged with on the premise of being a normal, civil state if there are to be any scraps of stolen hope left in the wretched lives of Palestinians.

Nina Butler is a MA student at Rhodes University currently in Palestine for research purposes.