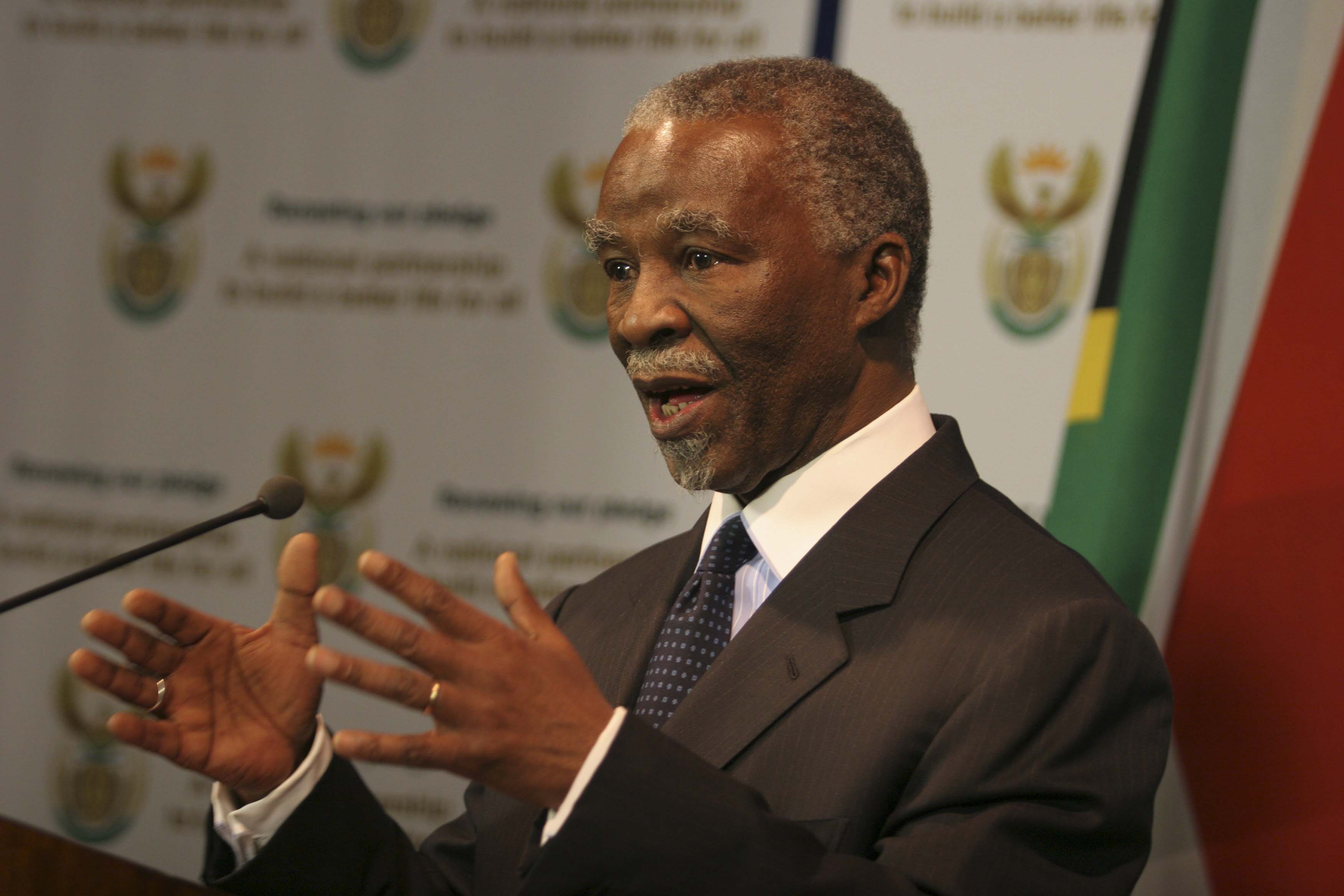 By William Saunderson-Meyer on 11 September 2011

After three years — almost to the day — former president Thabo Mbeki is emerging from political purdah. Mbeki, who retreated into virtual isolation after being booted by the African National Congress (ANC) in September 2008, is suddenly popping into the public eye again.

True to party loyalties of a lifetime and to reclaim his shattered dignity — Wikileaks revealed this week that Mbeki publicly burst into tears on hearing that he had been fired — he kept a low profile following his exit. This despite the occasional bit of freelance peacemaking he was engaged in, in various African hellholes. Now, possibly in response to the sudden enthusiasm the ANC Youth League has developed for the man they once pilloried, the soundbytes are becoming more frequent and daring.

This coincides with President Jacob Zuma’s internal rivals taking swipes at him over foreign policy, in rapid succession as regards Libya, Swaziland and extraordinarily over Botswana, where the ANCYL offered personally to oversee “regime change”.

Mbeki a few weeks back told an audience at Stellenbosch University that the ousted presidents of Tunisia and Egypt had headed “illegitimate and corrupt governments” rightly deposed in “genuine popular uprisings”. This was in contrast to Libya, he said, where the Western powers had engineered regime change.

There is nothing controversial in all this, except that Western exploitation of the Libyan rebellion in order to advance their own interests, by no means invalidates this as a popular uprising. International relations deputy minister Ebrahim Ebrahim, recently said as much, referring to Libya’s “popular uprising informed by the Arab Spring”. But certainly galling is Mbeki’s hypocrisy about democracy, coming from the one person who did more than any other to prop up the despotic regime of Zimbabwe’s Robert Mugabe.

What is potentially controversial is that Mbeki is once more opining on current events and how governments should respond. As an ordinary citizen he obviously has every right to do so but for the deposed previous president, with a penchant for foreign affairs and the world stage, to be so undiplomatic and so willing to tread on the toes of his successor, has to be a calculated move.

There are plenty of exposed toes for Mbeki to tread on. The Zuma government initially supported the Nato air strikes in Libya but was forced into a hasty u-turn under pressure of the ANCYL and the ANC’s trade union and South African Communist Party allies. SA has since blocked the release of internationally frozen assets to the rebel coalition, only eventually to relent under Western pressure.

Such internal ANC wrangling over policy in Libya with the resulting inconsistencies, contradictions and reversals would have been unthinkable in the Mbeki-era. Not only did Mbeki personally set policy parameters — driven by his now rarely mentioned dream of the African Renaissance – but even day-to-day decisions were under his aegis, with his right-hand man, Aziz Pahad, riding shotgun as deputy minister.

Perhaps because he has been run ragged at home, trying to control his increasingly fractious party, Zuma has been less exercised than Mbeki by SA’s role in the world. This is despite Zuma’s laudable successes as peacemaker in the Democratic Republic of the Congo and Rwanda and his firm and honourable handling of the Zimbabwe debacle.

The downgrading of foreign relations can be seen in the choice of ministers. Contrast the formidable and experienced Nkosazana Dlamini-Zuma, who was minister in the Mbeki administration, with the lightweight Maite Nkoana-Mashabane, the present minister of the Department of International Relations and Cooperation.

Dlamini-Zuma could hold her own against anyone. Nkoana-Mashabane has a patchy 10 years as High Commissioner to Malaysia and then India, followed by four years as Limpopo’s MEC of Housing and Local Government, before at Polokwane squeaking into the last vacancy on the ANC’s 80-person national executive and straight into the cabinet.

Mbeki will enjoy seeing Zuma’s foreign policy under fire from both the ANCYL on the right and SACP and Cosatu on the left. It comes just as his despised rival seeks to secure a second presidential term and — should Zuma fail — Mbeki possibly sees himself returning to the international limelight as foreign minister in a post-Zuma government. Old presidents never retire, they merely go into hibernation.