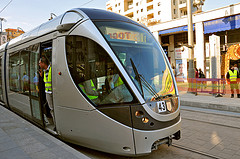 Jerusalem is the focal point of the Israeli-Palestinian conflict and its architecture is one of the most profound examples of Israel’s control over Palestinian sovereignty.

Since the 1967 conquest of the eastern parts of the Jerusalem as well as the West Bank, Gaza Strip and Sinai Peninsula, Israel has moved quickly to ensure its control by building settlements and roads which make a Palestinian state impossible. The latest effort of creating “facts on the ground” is the Jerusalem light rail which runs from Mount Herzl in West Jerusalem to the settlement of Pisgat Zeev in the eastern part of the city.

According to Jerusalem city officials, the light rail is a sign of progress for the holy city. It is been billed as a solution to Jerusalem’s growing congestion and a centrepiece of Mayor Nir Barket’s plan to elevate the city’s pedigree as a modern and international city. The project was completed with significant European investment.

Many Israelis have welcomed the light rail as a sign of progress despite many delays which plagued its construction. Palestinians have adopted a different position to the project, which they argue entrenches Israel’s control over East Jerusalem like never before. Activists with the Boycott, Divestment and Sanction (BDS) movement scored a victory against one of the principle European companies involved with the project.

Veoila, a major French company with stakes in various Israeli projects, announced recently that it would sell all of its shares in the light rail project after criticism from the BDS movement that the project entrenches Israeli occupation.

Amid escalating “price tag” attacks against Palestinians inside the West Bank and in Israel, few in Israel are taking note of recent confrontations on Jerusalem’s light rail tram. In just over one month of operation, there have already been a handful of “scuffles” between Palestinian youth and security officials. Last week, two Palestinian youth were reportedly taken off the tram and peppersprayed by security officials because “they had their feet resting on seats.”

Confrontations were expected given that the light rail is part of a long-term Jerusalem construction which runs through a number of Palestinian areas in Jerusalem. Indeed, the light rail project is understood by many in Palestine as part of Israel’s entrenchment of occupation conducted in the plain view of the international community. Writing in 2007, the Palestinian human rights advocate and author Raja Shehadeh described the Jerusalem construction in the following way.

As I descended toward East Jerusalem [from Ramallah, basically following the line of the light rail] I realised that the beautiful Dome of the Rock, for many centuries the symbol of ancient Jerusalem, was no longer visible. It was concealed by new construction. This was by design. Not only had Israeli city planners obstructed the view of this familiar landmark—they had also constructed a wide highway along the western periphery of Arab East Jerusalem, restricting its growth and separating it from the rest of the city.

Highways are more effective geographic barriers than walls in keeping neighbourhoods apart. Walls can always be demolished. But once built, roads become a cruel reality that it is more difficult to change … Now contorted, full of obstructions, walls and ugly blocks, [Jerusalem] is a tortured city that has lost its soul. [Palestinian Walks, page104]

The Jerusalem light rail connects the settlement of Pisgat Zeev, a fortress like city penetrating deep into the West Bank with the centre of West Jerusalem. When I enter East Jerusalem from Ramallah via the Hizmeh checkpoint, I am always stuck by the image of Pisgat Zeev, isolated and dominating the landscape. Driving from Ramallah, one passes next to the Qalandia checkpoint, an eyesore composed of concrete walls and watchtowers which is the main checkpoint separating Jerusalem and Ramallah, before continuing in the direction of the Dead Sea. The rolling hills descending to the lowest point on earth often provide spectacular views of Jordan. However, the beauty is short-lived. The road abruptly turns towards Jerusalem and you can see Pisgat Zeev with its separation barrier dominating the landscape like a medieval castle. Within minutes, depending on the queue at the checkpoint, you are back in “Jerusalem” and the dinging bells of the light rail can be heard in the distance.

All said and told, the light rail is a clear strike against any equitable two state solution between Israel and the Palestinians. Confrontations will likely increase as the status quo currently looming over the conflict gives way to renewed movements of Palestinian civil unrest. Just as the ANC targeted railroads during the anti-Apartheid struggle, the Jerusalem light rail might just emerge as a primary target of Palestinian violence.