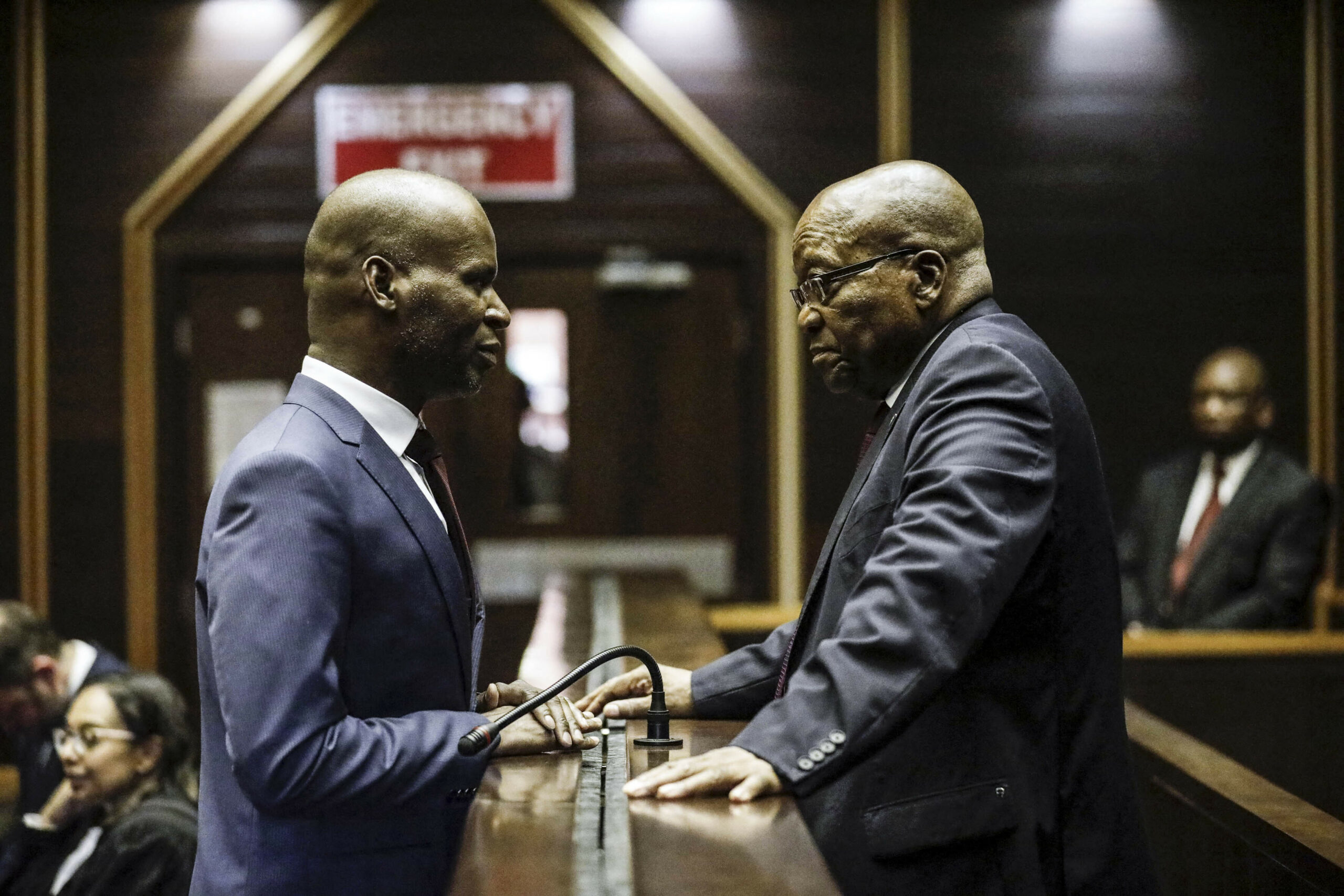 Zuma is playing for time, a privilege of the powerful and wealthy

“The law in all its majestic quality, forbids the rich as well as the poor, to beg in the streets, steal bread and sleep under bridges …” Anatole France, 20th century French novelist.

In one of his more famous essays, the British philosopher Bertrand Russell remarks that the last thing the goose expects after all the pampering and good feeding is to be slaughtered for Christmas.

This is the thought that came to me after news broke that Jacob Zuma’s lawyers have given notice of their intention to withdraw from representing him in his corruption trial. Ostensibly, this development resulted from the supreme court of appeal’s recent decision that not only does the taxpayer (thankfully) no longer have to fund the legal fees for the former president’s never-ending corruption trial, but that Zuma must also pay back the colours (public money) dished out for this fruitless exercise (though there is little reasonable prospect of recovering a dime since, for one reason among others, everything is owned by the family trust).

But with the latest development being Richard Spoor*offering to present Zuma without charge, I am of the view that uBaba’s bluff has been called. To insist that he intends representing himself, is a bit childish. I agree with Spoor that it is in the public interest that this matter be finalised sooner rather than later and that pro deo representation is a public duty.

Yet, after Zuma slandered the judiciary in a 25-page tirade addressed to the chief justice, expressing his dismay at the allegedly compromised nature of the judges appointed to his contempt case (regarding his refusal to co-operate with the Zondo commission), the judiciary has just given him a wonderfully plausible opportunity for a further remand.

For a man who’s not known for being particularly literate, though he’s immensely streetwise, 25 pages of blah-blah-blah seems quite a feat. In any case, although we don’t know yet whether this is why Mabuza Attorneys has withdrawn from representing Zuma, it does seem the most likely reason.

Whether it is ethical for a legal firm to withdraw its services from an accused at the last minute — the matter is set down for trial in a few weeks, on 17 May — is, of course, an entirely legitimate consideration or judicial line of inquiry. Certainly the trial judge can rule that if the accused stands to be prejudiced by the timing of an unreasonable request for withdrawal, the presiding officer may refuse such a request, irrespective of whether the firm was paid. In this case, the entire country stands to be prejudiced by a further delay. If JZ is not set on closure, we are desperate for finality.

That being said, the likelihood of being paid by Zuma on the never-never cannot be a compelling prospect unless the moolla is already in an offshore account (which scenario seems to me, with respect, most likely). Which reminds me: How do you get a small gathering of lawyers to smile for a group photo? Just say “fees”!

Money aside, there are, of course, other possible reasons why lawyers might want to withdraw from a case, such as that they cannot agree on a common defence strategy with their client. However, this seems unlikely, because the whole world knows that uBaba’s strategy is a two-pronged affair. Firstly, to deny every allegation against him, however obviously true; secondly, if all else fails, to confess and deny by arguing the case for radical economic transformation “by any dreams possible” (to rephrase Malcolm X’s famous aphorism). This latter line of reasoning would go something like: “The whites are sitting on a pot of stolen gold (yet they call me a thief), hence I have to take back what is ours.” That this course of action leaves tens of millions of South Africans without opportunity or income, is of course no concern of uBaba’s.

Although Zuma is not a young man any more, playing for time might just work out for him. With his money and connections, treatment for all shades of ailments (both real and imagined), from poisoning to heart palpitations, can justifiably and easily be obtained in exotic locations such as Cuba or Russia. Because of this wealth and power (or if all else fails), opportunities for appeals (disputes on the merits) and reviews (disputes on procedure, such as perceived bias) are also open to him. Let’s be blunt: no accused is better positioned to play for time than our man in Nkandla.

The point I am driving at is that, from a class-conscious perspective on crime in such a greatly unequal society as South Africa, the notion of fairness embedded in our criminal law and justice system is heavily skewed in favour of the wealthy and powerful. We ourselves must be especially wary in this respect; as the UN stated in 2019, South Africa was then considered to be the most unequal country in the world.

Consider, for instance, the well-known case of Fred van der Vyver, who stood accused of murdering his girlfriend, Inge Lotz — a talented Stellenbosch mathematics/music student — with an ornamental hammer. As the investigation into her death developed, it seems the state was so convinced of Van der Vyver’s guilt, that the investigating officers began to cut corners, and later presented what appeared to be trumped-up evidence in an attempt to place Van der Vyver at the scene of the crime.

One piece of evidence, among others, for example, was Fred’s fingerprint allegedly retrieved from the top of a CD cover, was demonstrated to have been a hoax. An expert witness, flown in from the Netherlands by the defence team, thought it more likely to have been lifted from a curved space, such as a glass, and could, therefore, not have been taken from a square CD cover. (This piece of evidence was deemed important because Inge watched a rented dvd on the afternoon of her brutal slaying).

At the end of this very expensive trial, which ran up millions of rands in the Cape high court, Van der Vyver was acquitted, thereby leaving many important questions surrounding his possible involvement in Lotz’s death unanswered. So much for sloppy police work with the perpetrator still at large.

Even so, Van der Vyver himself (or possibly his father) had to fork out no less than R10-million for his defence team, including payment for the experts flown in from Europe and the US to show up the flaws in the state’s fake forensic evidence. On a classist reading, one might well ask if an accused with considerably more modest means could have defeated the state’s case under these circumstances. The answer is obviously a resounding no.

Van der Vyver may have been wealthy, but he can’t compete with either uBaba’s resources or range of benefactors. With a pension of R145 000 a month (Really? Does any pensioner need that sort of income? Most working people don’t even make that in a year), whatever happened to the Gaddafi billions that were entrusted to Zuma, as well as the 100-million (not sure of the currency) cash bribe that the Russians allegedly handed over “in good faith” to facilitate or secure the now-defunct nuclear energy deal? In this context, how is it that uBaba cannot pay for his own defence?

Against these vast sums, the charge of a R500 000 bribe from Thales fades into insignificance. Either way, honour among thieves, as an English judge famously said, should not be encouraged.

Be that as it may, the theoretical principle of fairness in our criminal law is not meant for the benefit of all accused. It demands repetition that in societies with inordinate levels of inequality, such as South Africa, this notion of fairness is heavily skewed in favour of the rich and the powerful, such as uBaba and the infamous Van der Vyver.

People who have the financial resources (or access to resources, such as those benevolent deposits by Zuma’s well-wishers) to employ the best legal minds to plot a course through the labyrinth of legalese can milk the system’s preponderance for fairness. Like Russells’s goose being fattened for slaughter, the legal system keeps giving to those least in need.

* The article has been amended to show that Spoor is not employed by Lawyers for Human Rights as previously mentioned, but has his own law firm.