While reading Stephen Grootes’ article, “The politics of navigating the English Language”, I became increasingly annoyed. In a country with 11 official languages why are we overly concerned with how well people speak English?

Grootes’ article looks at prominent political leaders and how they fair when presenting themselves in English. The unintended consequence of writing such an article is that Grootes appears to be an elocution “Nazi” rather than a journalist concerned with the sound bites he struggles editing. Moreover, he comes across as a conservative English-speaker who has been appointed by the Queen of England to keep tabs on the natives when they use the borrowed language. The article seems to be making the argument that in political life, how one speaks English really matters. Also, if one is looking to capture the attention of voters in urban settings, they need to “speak well”.

The truth is, speaking well is not only about what happens in political circles and it not only matters for politicians, it matters for everybody. Unfortunately, thanks to the colonial backlash, our definition of what it means to speak well is limited by the obsession we have with English: that if one speaks English, you must speak it well. Surely, in a South African context, speaking well should be more about how multilingual one is rather than a focus on one language, English. Articles such as the one Grootes wrote perpetuate English hegemony. 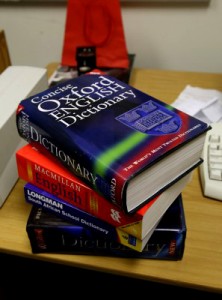 Focusing on how English is spoken in a country like South Africa seems disingenuous. By now it should be common knowledge that most South Africans do not speak English as a first or even second language (which Grootes rightly points out). And that’s okay. Black people should not be policed about how well or when they speak English because they have an arsenal of other languages they can whip out at any point in their daily life. The obsession with English overshadows the real conversation that should make any kind of monolingualism abhorrent. What should matter is not how well you speak English but rather, how many languages you can speak (or at least understand).

As an English teacher, I have the awkward job of teaching English and often being the elocution Nazi in my classroom when learners present orals. But because I am able to speak and understand more than one language, I can afford to be a self-righteous English teacher because when I begin my lessons I tell my students am I first and foremost a language speaker rather than an English teacher. Therefore my classes are about teaching English while foregrounding the context of a multilingual context. So in teaching English I am able to use other languages in my teaching and use examples from other languages to enhance what is being taught in the classroom (and often ridicule how silly English rules are because there is always the exception to the rule).

I am not naïve about the power English has over the way we think and communicate in our daily lives. I know that many parents send their children to English-speaking schools and are often proud when their little ones come home one day to declare that they will no longer be speaking their mother-tongue because their teacher insists that they speak only English if they are to be proficient in the language. This is a very complex situation because much has been said about children’s ability to navigate many languages at a young age rather than obliterating their mother tongue in the name of English proficiency.

This obsession with speaking well is also about our warped sense of success and what Grootes cites as aspiration (in relation to Mmusi Maimane) in his article. English is more than just a language. It is seen as part of the package of success. People aspire for many things and on that list is the language of success, English. And unfortunately, in a globalising context, English has its limitations, but more importantly, monolingualism has its limitations. Many argue that English is the language of commerce, and no-one disputes that, but the example in China and countries with a market for learning English will show that “speaking well” isn’t necessarily at the top of the list. Speaking English is important, but the accent should not be the defining factor.

The obsession with “speaking well” smacks of snobbery, is potentially racist and an uncritical view of what language really means in our daily lives. It is also about pointing fingers at “brown people” who may have other languages or dialects and constantly reminding them that they are not meeting the standard of speaking well. The obsession also undermines the languages that other people speak. As I’ve already pointed out, why is it more important to speak English well, above speaking isiZulu well? And that’s not only for President Jacob Zuma but for everyone who speaks another language other than English. Grootes’ article is very disappointing. It highlights the media’s role in undermining African languages and being complicit in the English hegemony that takes place. Grootes points out that he works for radio, an English-dominated, or more appropriately an English-only radio station, that prides itself on covering important political stories. There are very few multilingual radio stations or radio stations with presenters who allow listeners to use other languages when calling into a show and more importantly, allow for serious political discussion to take place in a language that isn’t English. This is unacceptable.

If politics and political life is about people (at its most basic level) then there should be a demand (especially in the media) that speaking well means being multilingual rather than speaking English to meet some arbitrary standard of “speaking well”. Multilingualism is about people and recognising the truth about language and how we use it in our daily lives, whether one is a prominent political figure or not.

A teacher in Johannesburg.Interested in education,feminism and sometimes a bit of politics (with a small letter p). More by Athambile Masola