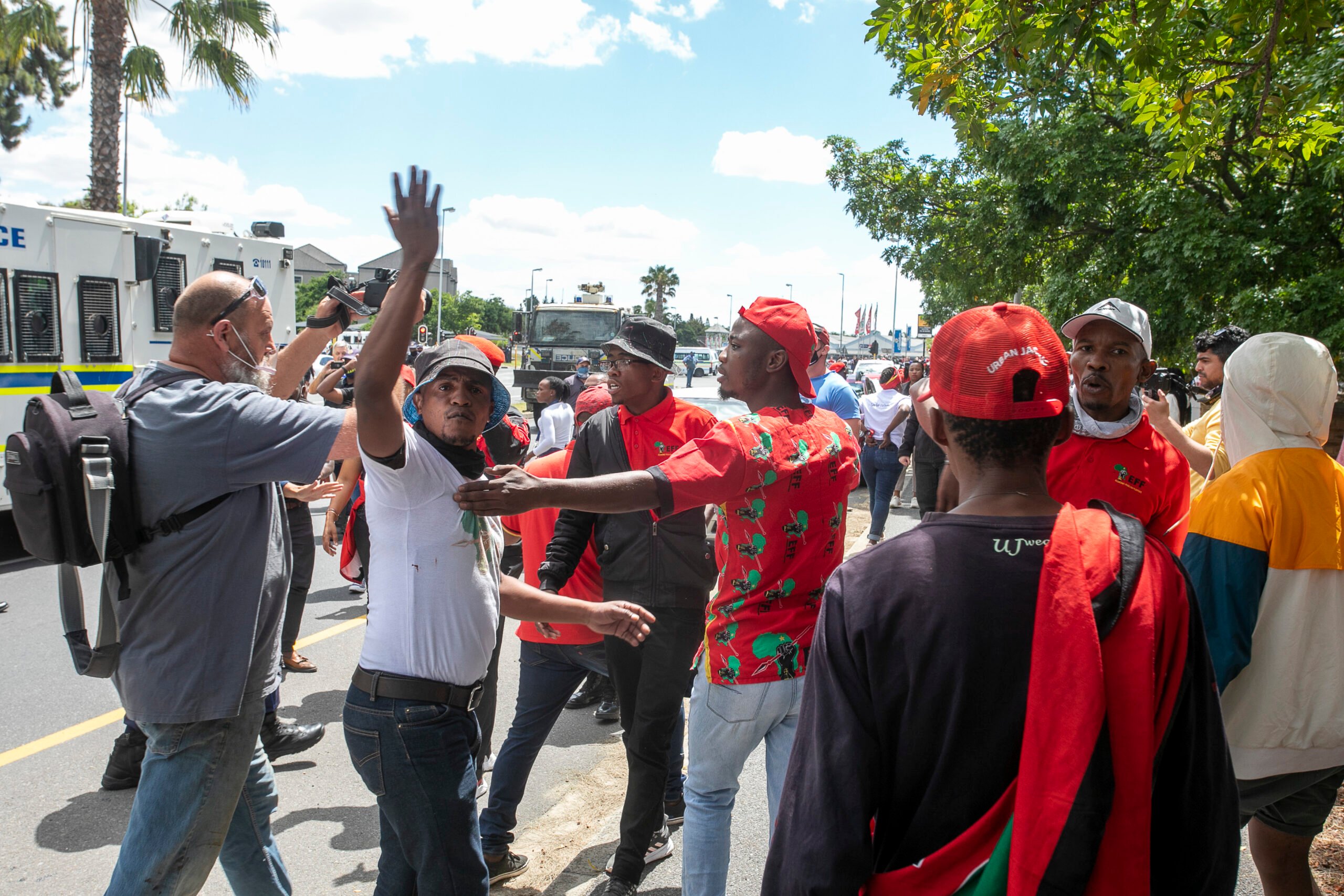 It’s reasonable to argue that the EFF’s hyper-focus on race is largely opportunistic. Julius Malema and his executive leadership are brilliant politicians, aware that racial injustice burns brighter in the minds of millions compared to class antagonisms and this rage is provoked for performance.

Portraying the enemy of black emancipation to be a white minority means economic struggle can be sidelined for hollow anti-racist activism. As already established, the struggle against racism and capitalism are not mutually exclusive — these struggles should not be divorced. Unfortunately because of the EFF’s understanding of racism, their crusades against it have little consequence for improving the material existence of most black people.

As others have highlighted, the protest action by the EFF against Clicks and H&M were elite sites of activism. Racism must be confronted and called out, but the pursuit of diversity and representation in corporate spaces is of little significance to most black South Africans. If indeed the EFF are Marxist-Leninists, then their priority should be advocating for and building a movement within the working class to advance its political concerns.

Earlier last year, Clicks employees accused the company of forcing them to work without pay. It has also been revealed that Clicks is under investigation for price gouging throughout the early stages of the national lockdown. The inaction and silence of the EFF against such blatant instances of worker abuse is worrying.

Although the EFF embarked on a campaign against racism in Brackenfell, death threats were sent to prominent anti-mining activist Nonhle Mbuthuma, in Umgungundlovu, Eastern Mpondoland. The 41-year-old activist is spokesperson for the Amadiba Crisis Committee, and alongside her community, has stood against the proposed stripping of ancestral Umgungundlovu land for titanium. Often attempts to oppose greedy corporate mining result in the constant harassment or killing of grassroots activists. The EFF has been absent from the struggles of mining and rural communities. And yet these communities consist of the black “bodies” they claim to be fighting for.

The primacy of race and attention given to a blunt analysis of racism allows the EFF to continually represent itself as courageous, morally righteous soldiers battling the sole axis of oppression in white supremacy — even if it isn’t able to win victories for the black working class it claims to represent —  symbolic gestures are offered in the place of justice.

The EFF does not forge tools through which race can become obsolete. Instead it amplifies a cynical discourse that jolts new energy into regressive racial thinking. Ideologies, and the identities they impose, are not eternal. They burst out of conditions which can be changed.

In numerous statements influential members of the EFF have spoken as though race is more than a constructed identity but instead an essence which defines and tightly restrains human potential within politics. In 2018 during a parliamentary hearing, Matthew Parks, the white parliamentary co-ordinator for Cosatu, was criticised by an EFF member of parliament for stating Cosatu’s position on land expropriation without compensation. Parks was characterised as being a representative of white monopoly capital. To the EFF member, it was absurd that a white person could represent the interests of the black working class, who make up most of the union’s membership.

Race, and other experiences of identity, can inform someone’s politics but they are not the sole determination. To argue that a white man is incapable of working in solidarity with black workers is deeply cynical — what then is the point of politics if racial ideology cannot be transcended to build solidarity? Such racial determinism is present in numerous segments of our political discourse and the EFF has played a big role in amplifying it.

Two years ago deputy president of the EFF, Floyd Shivambu made headlines for objecting to the repeated presence of treasury deputy director general Ismail Momoniat at finance committee meetings in parliament. Shivambu said the Indian treasury member undermined African representativeness. The logic of his objections was flawed because it assumes that representation is inherently progressive and that those who share the same skin colour or ethnic identity must share the same interests. Africans are not a monolith, our interests can clash and diverge.

In 2019 Malema tweeted a quote by one of his personal heroes Robert Mugabe, which read: “The only white man you can trust is a dead white man”. Another cynical take endorsed by the EFF and its president, which incorrectly places white people, and not systems of domination, as the primary obstacle to black liberation.  For Mugabe, Malema and Shivambu race defines one’s being and political destiny.

These statements directly clash with the socialist principles of the EFF. One aspect of being a socialist, or any radical in pursuit of emancipation, is to believe that people and the conditions which mould their views of the world, can drastically change. If one didn’t sincerely believe this, feminists, LGBTQ+ activists and environmentalists would cease to exist because their politics would be an exercise in futility.

Finally there is the anti-Indian mood among some segments of the EFF. It reveals how the party’s race reductionism can drain race of its historical and sociological content. Addressing party members at a rally in 2018, Malema asserted:  “[The] Majority of Indians hate Africans. Majority of Indians are racist.”

My initial reaction to this remark was to be defensive of Malema. There are palpable tensions between some Indians and black people in the country, particularly in KwaZulu-Natal. Being generous, I thought Malema’s remarks would have led to a broader and more thorough discussion of the historical roots of this tension and the economic relationships between blacks and Indians which sustain it. Such a discussion never occurred. A broad racial generalisation was made and that was the end of the matter for the EFF.

What did result was intense outrage from parts of the Indian community, which acted as validation of Malema’s statements to some black people. Anti-Indian sentiments demonstrate the EFF at times reduces racism to merely a deplorable, inescapable mentality. One doesn’t have to deny the existence of anti-black views and actions of some Indians to dive into the sociological reasons for such attitudes and the systems or conditions which perpetuate them.

Perhaps the worst outcome of the EFF’s acceptance of racism towards Indians within some of its ranks is the erasure of the contribution of the Indian community to South Africa’s long history of progressive and radical politics. Moreover, we can’t forget that Indians were colonial and apartheid subjects, wounded then and now by the project of racial capitalism.

The trap of racial identities

It appears many of us have resigned ourselves to be trapped in racial identities. The task of transcending race has been abandoned by most political actors. Although racial identities can, to a certain extent, be reclaimed and reworked to be positively understood and experienced, overall, race is a dangerously incoherent construct. It intoxicates our minds with falsehoods and prejudice, it can be utilised to justify implausible brutality and destructive division. Moving beyond race does not demand we be blind to its existence and effects. Rather, transcending race requires disposing the conditions which reproduce it.

At this level of discourse the EFF often keeps alive a regressive understanding of race. One in which black people are reduced into a monolith, in which races possess an essence which dictates their social being and political identity. Aggravating this narrow understanding is a conception of race which distances battles against racism from the urgent needs of the black working class.

The EFF can grow beyond its current racial ideology by thoroughly rooting itself in working class movements, therefore enhancing its critique of capitalism while amassing the weaponry needed to oppose it. But, because the EFF has no solid roots or connections to grassroots movements, unions, collectives of the unemployed and poor, it is likely to remain regressively racial.