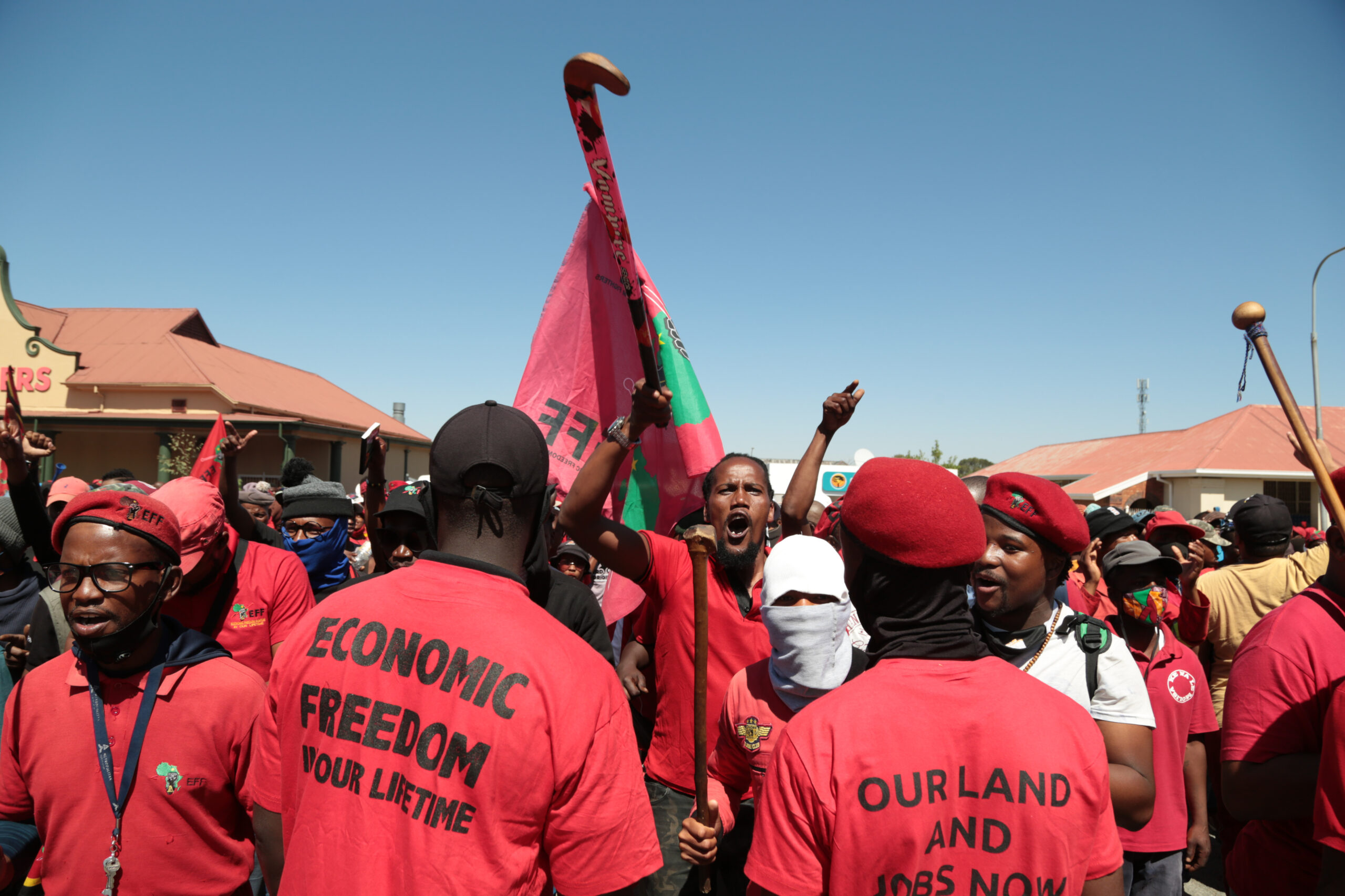 “Ideologically, we still have not defined ourselves … we are still meandering” — an EFF insider.

Even before the EFF’s inception, Julius Malema remained resolute in his conviction that race is the dominant contradiction of South African politics. And therefore the phenomenon most likely to trigger conflict and change in the country.  Malema is partly correct. Economic and spatial apartheid retain their vigour. Millions are still under the bewitchment of white supremacist ideology and the face of suffering is still largely black.

Understanding race/racism is enlightening and indispensable for an emancipatory political programme, but it alone does not unearth the root of the country’s systemic failings. The EFF’s obsession with race and neglect of class politics undermines its professed socialism.  But why is class central to socialist politics?

Because the working class are the central agents of revolutionary change.

Our awareness of class has been dulled. It has been diluted into a matter of income, wages and the type of labour you do. Class is not an identity. It is a position in a hierarchy created by relationships of domination, exploitation and exclusion. These relationships define the essential nature of capitalism, and any attempt to overcome capitalism must therefore be centred in understanding class. (Please see Part 4: Understanding class and a decent human life).

The EFF does profess an awareness of class, boldly asserting that they are the vanguard party of workers. Disappointingly, this awareness does not reveal itself in their politicking as the party has little to no firm ties to working class movements. This isn’t to say the EFF is totally disengaged from working class activism. Rather, their advocacy and activism for the working class is sporadic, occurring from the top down, largely opportunistic and therefore unlikely to pose a significant challenge to capital and its political influence.

One does not see active and continuous engagement by the EFF with radical grassroots movements across the country such as the Unemployed People’s Movement or the Poor People’s Alliance. These movements’ ideologies not only align with that of the EFF’s in some aspects but they are at the forefront of struggles against mass evictions, xenophobia, homelessness and activism for housing, food security, employment and women’s issues etc.

Leaders of these radical movements and some entire organisations have not only distanced themselves from the EFF but have actively condemned the party.

“We will never liquidate our struggle into a project that is run by people who have no history of supporting the struggles of the poor and the working class … The EFF are opportunists and we reject them [with] contempt” read a press statement by the Unemployed People’s Movement. The disconnect of the party from these movements seriously calls into question not only their ideological commitments, but their interests.

Unions have always been a constant in the struggle for radical democracy, i.e. the battle for socialism. Although the EFF has flirted with the possibility of a relationship with South Africa’s unions, it has not materialised into a programme of sustained and manifest solidarity.

The Workers and Socialist Party (Wasp) has critiqued the party as nationalist and not socialist. Wasp attempted to pursue electoral collaboration with the EFF, through open debate regarding policies of both organisations. This was rejected by the EFF, who instead proposed a takeover of Wasp, its ideological liquidation and the restriction of any criticisms by Wasp leaders at internal leadership meetings. Such proposals stand as evidence of a party that lacks an internal culture of democracy and one that is wary of visible, and therefore accountable, criticism.

The EFF’s distance from the working class is strategic self-sabotage. The struggle for socialism cannot be won through the ballot box alone. Ballot boxes are not the locus of power in capitalist, liberal democracies. Zones of influences exist in numerous institutions that maintain the supremacy of capital and its political representatives alongside its social advocates, who may not consider themselves lovers of free markets but depend on the status quo for their survival.

For example, corporatised media and their reproduction of narrow narratives, or our education system that mostly trains young minds to be uncritically obedient of authority and to quell temptation to question our social order.

Leaders of criminal syndicates thrive on the dysfunction of our current order and often work against progressive movements.  A growing terror is the class of kleptocrats, draining state resources to amass power. They are not to be seen as a morally callous minority but rather a series of networks embedded in a political economy of corruption.

The state has become an arena for personal enrichment and competition is violently competitive. The state has a monopoly on violence.

A working class movement is pivotal in order to build alternative zones of power: to protect people from and combat state violence, to reformulate our imaginations and unshackle our minds from ideology, to exert suffocating pressure on elites for reform. If such a movement is not constructed and sustained, any radical party that walks into executive power will constantly face daunting opposition and not be able to mount a serious defence. Remember the subversion of Patrice Lumumba’s Congo, Salvador Allende’s Chile, Mohammed Mosaddegh’s Iran or Jacobo Arbenz’s Guatemala. Leftist leaders, all democratically elected, with popular support from the masses, but still robbed of power.

Nearly a decade since its conception and the EFF has yet to firmly root itself in working class politics. This makes it difficult to take their professed commitment to socialism seriously.

“Socialism is the completion of democracy, not the negation of it”  — Terry Eagleton

Striving for the right and capacity to determine one’s existence is a profoundly democratic project. Presently our institutions, social relations and economic order constrain this kind of self-determination. Through the abolishment of capitalism and creation of societies based on collective and communal ownership, socialism envisions a thoroughly democratic future where all contribute and benefit according to their needs and abilities.

Anarchists and radical feminists never fail to remind us that the future society one struggles for must be lived to every extent possible, in the struggles of the present. One can see the living of future politics in movements such as Abahlali BaseMjondolo.  The organisation aims to reclaim the commons and create a series of interconnected communes, therefore in its organisation it opposes rigid hierarchies, functions through direct democracy and decentralised leadership.

Has the EFF adopted an internal culture of democracy that is inseparable from socialist struggle?  The reverence for its commander-in-chief drastically limits the internal expansion of democracy. Ardent support for Malema is more than understandable — as a politician, his eloquence, charisma, his radiance of authenticity and ability to speak to the frustrations of citizens is unmatched in the current landscape. Floyd Shivambu and Dr Mbuyiseni Ndlovu (aka “The People’s Bae”), share these magnetic qualities.

Uncritical praise and obedience of leadership arrests the development of democracy. A party becomes shaped in the image of its executive, as policy is dictated from the top, down. Past and present members of the EFF have spoken of the general intolerance of constructive dissent or criticism within the party. Besides silencing critically dissident voices, forming a party around its top leadership produces a culture in which ascendance within the organisation is not based on competence or contribution, but rather one’s ability to appease leadership.

A noticeable effect of idolising leadership is ideological stagnation and confusion. The contradictions which have been laid out so far, I suspect, are partly because of an absence of debate within the party and a hostility to new ideas.

Adorning the aesthetics and structure of a military organisation reveals how the EFF, like much of our political culture, is stuck in an authoritarian mode of politics. Militaries are abundantly undemocratic institutions. A soldier is rarely encouraged to think critically or express their opinion by questioning authority. They are trained to be impeccable in their obedience because they are tools which must serve a particular purpose. Utilising a military structure as a political party allows one to firmly grip control over party action and policy — control which is often unaccountable and which can be abused.

The military structure of the EFF makes one wonder about how much the party’s leadership sees itself above its rank-and-file members, how seriously they take the needs, voices and interests of its base. A party that seeks to be the vanguard of the working class cannot impose a programme on its potential members from the outside-in. Policies and programmes of action have to be organically formed through democratic participation of the poor, unemployed and working class.

If the EFF aims to seize control of the state having not immersed itself in an internal culture of democracy, how can we be confident it will not elevate the party and its leaders above the South African people when in power?

The EFF needs to evolve

The future of the EFF is uncertain. Remaining popular in political discourse and often orchestrating national debate, it still hasn’t demonstrated the ability to effectively govern. Its radical posturing at times invites ridicule and harsh condemnation, one wonders if this increases scepticism among potential voters? For the past five years its top brass has been entangled in legal battles and allegations of corruption, leading some to conclude that the party is made up of kleptocrats doing socialist cosplay.

It might be idealistic to believe, but the party’s flaws do not have to be fatal. Its present weaknesses can be overcome. The realisation of this evolution can only be led by the party’s base. Contrary to some opinions, this base contains passionate people equipped with sharp intelligence and critical minds who can produce emancipatory outlooks.

Ultimately the EFF is stunted by the ideological disorientation of its leadership. A leadership which offers cheap populism, symbolic gestures over material victories, superficial socialism and remains uncommitted to radical democracy.