A preamble: just as Penny Sparrow does not speak for me, I do not speak for any of you. But I am hoping that some of you will at least listen, and think, and reflect.

As a white South African, I’d like to say thank you to Penny Sparrow. Without her, we wouldn’t be having this discussion. We’d be bitching and moaning as usual about the rand and #ZumaMustFall and thinking we can continue to avoid the angry elephant in the room. Here’s a spoiler alert: we can’t.

Racism has always been an obstacle to the building of genuine national consensus, we simply allowed shiny Rugby World Cup trophies to fool us into thinking we didn’t have to deal with it. The Rainbow Nation myth gave white South Africans permission to let themselves off the hook without ever asking forgiveness of black South Africans, or even expressing contrition. This has caught up with us, and we can’t ignore it any longer.

So, now, we are faced with this stark reality: that racism is the single biggest threat to South Africa’s future prosperity — because it stands in the way of addressing any other issue currently facing us. Anger and hurt are justifiably dominating public discourse, which means that there is no chance of rational or considered reflection. (If white South Africans phone 702 to wail about how hurt they feel because of criticism, imagine how black South Africans feel when they see references to monkeys or entitlement.)

Every time white South Africans say “get over the past already” — while, at the same time, indulging in nostalgia about how great the apartheid days were — we ensure that the legacy of apartheid will always matter more than current and future delivery, and more than holding our leaders to account. Sparrow and her ilk might as well be campaigning for a political party they profess to hate, and they’re too stupid to see it. 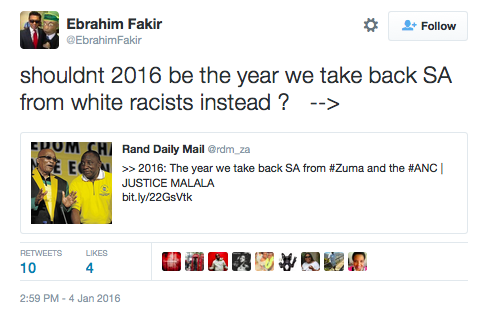 Butbutbutbut! you protest. What about crime? Or BEE? Or Nkandla, load shedding, SAA and all your pet hates? “I was born after 1990, so it doesn’t involve me.” And, yes, what about examples of hate speech like this?

Well, you know what? There can be no ifs or buts. If we as white South Africans are going to refuse to deal with racism, if we are going to keep saying “but what about … ” in response to every criticism, then we are going to go around in circles forever, probably around a plughole.

Someone has to take a stand. We have no choice but to live together — visa regulations and points systems mean that mass immigration of white South Africans is a fantasy, both for those who want to leave and those who want to see them go — and this means that we need to be mature about this, whether we like it or not. We have to acknowledge that we cannot talk about freedom of speech, or the rand, or crime, or corruption, until we have this conversation. And this conversation is going to be uncomfortable for us. Having it does not mean that we will be liked, or greeted with open arms. There will be no tearful reunions where everyone hugs and says, “I love you”.

But with visible commitment by us and a little bit of luck, we may collectively emerge as citizens, not of a tenuous facsimile of togetherness that flickers only into view when a national team is playing sport on TV, but a nation built on the hard daily grind of honesty, mutual respect and understanding that if we work together, we have a shot at achieving the elusive better life for all.

Sentiments are all very well, but action counts. What, then, can white South Africans actually do?

Demonstrating that we are opposed to racism is only part of the task facing us. Whether this takes the form of marches, or some kind of declaration, I don’t know. (#RacismMustFall, #RacismNotInMyName and #RacismStopsWithMe are already circulating. Hashtags don’t fix problems or replace the need for substantive action, but they can make necessary conversations visible, and that is part of what is needed.) Whatever we do, it should not involve politicians.

For a start, we can pronounce African names correctly. There’s a reason that #TheYearWeMispronounceBack is trending. Even if the clicks defeat us (and I stumble over them all the time), we can make an effort. We can also stop mocking black South Africans for their pronunciation of English.

Listen more. We can resist the urge to be defensive the moment we see a comment critical of white South Africans. We can also make an effort to understand why black South Africans are angry, and not judge or attempt to police that anger.

Speak out when we see or hear racism either online or offline. Racism should be socially unacceptable and that will only happen if white South Africans call out other white South Africans. Whether it happens on Facebook or around the braai, say something. Raise the social cost of being a racist.

Examine our own attitudes and think about the impact of our thoughts before we make them public. Yes, self-censorship is necessary, and we should practice more of it.

Learn an official language other than English or Afrikaans. This is probably the single most important thing we can do in the short term.

There’s a lot more, but this is a start.

Phew. Deep breaths. Is your blood boiling? Are you already composing a comment refuting everything you’ve just read?

I’ve written this wondering which quotes will be selectively tweeted, which will trigger outrage, and which will get approving RTs depending on whose agenda they serve. I know that I’ll be dismissed either as an embarrassing proponent of whiteness or a contemptible libtard and worse; that this will be forwarded to expats from Canada to New Zealand with comments like SMH and WTF; that Steve Hofmeyr and Dan Roodt will hate me more than ever, Andile Mngxitama will never love me, and it would be much, much easier to keep quiet. And yes, to be honest, I am not particularly optimistic about how many white South Africans are willing to take a step back and examine themselves critically. (If racism becomes a criminal offence, we’re going to have a real problem finding enough jail space for everyone.)

But I do believe that there are many white South Africans out there who do want to see change, and are willing to do something about it instead of pretending that it is someone else’s problem. I know some of you. It would be good to see lots more of us raising our hands.

This is just the start in a long and hard journey, and it will not be easy. But when so much is at stake, there really is no other way.

Thanks again Penny, for inadvertently giving us the collective kick up the backside that we needed.