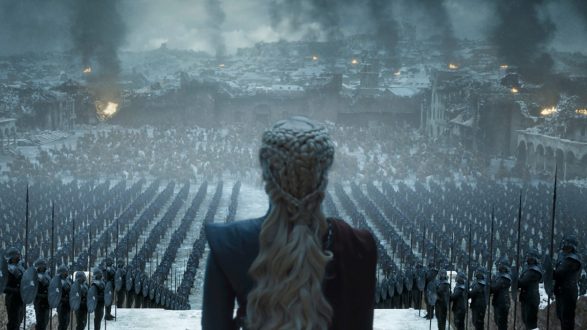 The global hype around the HBO television series, Game of Thrones (GoT), which ended with what was apparently generally perceived by fans as an anticlimax of sorts, made me reflect once again on the pertinence of the intellectual work of that indomitable French thinker, Bernard Stiegler, for grasping the way that contemporary electronic technology is modifying human subjectivity. This is a topic that deserves a full-length paper for an academic journal, of course, but its rudiments should be shared with interested readers more generally.

I can introduce Stiegler’s thoughts on this with the first paragraph from his Suffocated desire, or how the cultural industry destroys the individual: Contribution to a theory of mass consumption (Parrhesia 13, 2011, pp. 52-61; translated by Johann Rossouw, p. 54):

Hyper-industrial capitalism has developed its techniques to the point where millions of people are connected
every day simultaneously to the same television, radio, or play console programs. Cultural consumption,
methodically massified, is not without consequences for desire and consciousness. The illusion of the triumph of the individual is fading, while the threats to the intellectual, affective, and aesthetic capacities of humanity are becoming clearer.

Does this not resonate with one’s experience of the reception of blockbuster series like GoT, which includes other, similar series, of course? To understand what Stiegler means by the ‘illusion of the triumph of the individual’, recall that after the 1968 social protests one was led to believe that the era of individualism was upon us, while it turned out that this was just another marketing ploy; what really happened — as Deleuze argued in his pithy ‘Postscript on the societies of control’ (referred to by Stiegler on p. 54) — was that capitalist (pseudo-) ‘democracies’ shifted gear from discipline-oriented modes of control to different, ‘smoother’ modes, such as debt-based control, marketing, the service industry and cultural capitalism (p. 54), which includes the television (and streaming) programming phenomenon. The result was the ‘loss of individuation’, with its ironic echo of Nietzsche, given that here it is not religion, but a (perhaps deified) economic system that functions as its cause (p. 54):

The so-called “postindustrial” society has in fact become hyper-industrial. Far from being characterised by the domination of individualism this epoch turns out to be one of the herd-becoming of behaviour and of the generalised loss of individuation.

Just as workers were proletarianised in the 19th century (that is, standardised, compared to their status as highly individualised craft-workers before machine-industrialisation), so, today, Stiegler reminds one, consumers have become proletarianised, standardised and homogenised through contemporary capitalism’s use of advanced communication and information technologies, which ‘format’ and artificially ‘manufacture’ consumers’ needs and desires, and therefore consumption patterns — something that Adorno and Horkheimer already realised in the 1940s. If this seems like gobbledegook to you, consider how GoT and other shows like it, as well as so-called reality TV programmes, affect consumer behaviour in mimetic and linguistic ways (Trump’s The Apprentice comes to mind, with its signature concluding exclamation, ‘You’re fired!’).

In relation to GoT, this manifests itself in behaviour reminiscent of the fictional Borg in Star Trek, whose ‘members’ are all controlled by one collective ‘brain’ — witness disgruntled fans orchestrating a kind of (politically irrelevant) collective drive in favour of rewriting the final season of the series. If only they exhibited the same behaviour in the form of political action to overthrow the yoke of neoliberalism, one might applaud them. Instead, the neoliberal culture-(hyper-)industrial machine manipulates them like puppets. (While I believe this to be generally the case, given the evidence, it is also true, however, that there are reflective individuals who appropriate popular art like this critically, in this way gaining insight into the social and political characteristics of the present. I know several such people personally.)

It is therefore no exaggeration to say that contemporary humans, far from generally displaying distinctive individualised attributes, are increasingly behaving in herd-like ways, and — to use the idiom of Freud in his essay on ‘Group psychology’, alluded to by Stiegler (p. 55) — they have the potential of regressing to the behaviour of a primitive ‘horde’ when they reach the point where violent ‘acting out’ seems to be the only option to restore a feeling of ‘being alive’ as an individual.

Significantly, Stiegler (p. 55) refers to Freud’s perspicacious remark, that one might expect a ‘condition’ he called ‘the psychological misery of the mass’ to arise under circumstances where social bonding is brought about by people identifying with one another in the absence of (recognising) worthy leaders or other figures with whom they could identify. Needless to add, under conditions of the hyper-capitalist culture industry such identification can — and does — occur in relation to (among other things) synchronised programmes such as GoT, available simultaneously through streaming services. The effect of this is the destruction of the distinctive, singular subject as a ‘desiring’ self , in the process undermining one’s very humanity (Stiegler, p. 56):

As enormous systems of synchronisation the cultural industries, especially television, are machines
to liquidate this self, of which Michel Foucault studied the techniques towards the end of his life. When tens or hundreds of millions of viewers simultaneously watch the same program live, these consciousnesses around the world internalise the same temporal objects. And if they repeat every day at the same time and highly regularly the same consumptive audiovisual behaviour because everything pushes them to, these “consciousnesses” end up becoming that of the same person, that is, of nobody. The unconscious of the herd releases a collection of drives that no longer form a desire — for a desire presupposes a singularity.

As a digression, you may wonder why I show such resolute opposition to the neoliberal, consumer-oriented incarnation of capitalism — which, as many thinkers, including David Harvey and Zygmunt Bauman, have demonstrated, differs fundamentally from the more acceptable ‘productive’ capitalism of the 19th century. The reason is probably only visible to reflective people. Neoliberalism, as Deleuze saw clearly, rules by subjectivising people into ‘dividuals’ (with its play on ‘divided’ and ‘dividend’, accurately suggesting the absence of a sense of community and a metonymic preoccupation with money) who are left no option but to commit themselves to the reproduction of a neoliberal way of life, lest they be deprived of all rights – so-called ‘privileges’ – in the (politico-) economic terrain. No one can escape this process completely, even if some of us can resist it.

Take me, for example: I recently retired from teaching at a university for several decades, but the retirement lump-sum I received to invest for a retirement annuity was so pitiful that I simply cannot afford to live on the monthly interest I am allowed, and able, to take from it — if I were to take the maximum percentage allowed, the capital amount would decrease so quickly that pretty soon my partner and I would have to live severely truncated lives. Hence, when another university appointed me as a senior research fellow, earning money through publishing peer-reviewed research papers and supervising postgraduate (master’s and doctoral) students’ work, I welcomed the opportunity, BUT soon realised that I have been relegated to the position of a newly proletarianised intellectual worker whose livelihood depends entirely on ‘output’, with no financial security in the guise of a monthly salary, strictly performing the equivalent of slave labour for financial survival, instead.

Don’t get me wrong — I welcome(d) the opportunity to continue with my academic work, but I have no illusions about its value as perceived by the ‘authorities’. I am merely a cog in the neoliberal machine that generates income for (neoliberally restructured) universities, and so are the vast majority of people today in different contexts. Needless to point out, this is a major source of stress, dealing, as one constantly has to, with publication and graduation deadlines and the like.