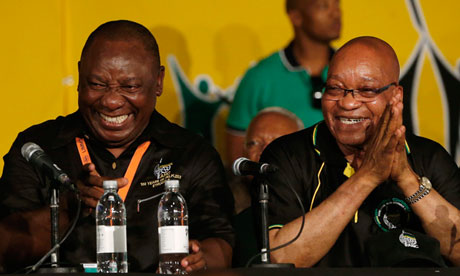 Before launching into this letter’s raison d’être, I want you to know that I am truly fond of you. Truly. I want to squeeze your plump cheeks, sit across the dinner table from you just to hear you speak, and give you a good old bear hug at the end of the evening.

Some may call me a Renaissance man for expressing such desires, others may call me a lot worse, and I say let them, because when you came into office, I genuinely felt a comforting warmth in my heart. I saw in you something that I have seen in few other political leaders: a warm smile, supported by a calm wisdom and a sincere desire to build healthy countries with happy people, against all the odds. Expressing this at the time, I was called naïve and was pointed to your own corruption scandals and Marikana. Still, I believed.

Of course, I am well aware that my mini man crush may simply be the result of the utter repulsion I feel for the man who preceded you. I would probably have seen anyone following Jacob Zuma as a demi-god who would lead us to the promised land — even if that man was Ace Magashule. Yes, I know that may hurt and, like a scorned lover, I don’t really mean it.

That giddy day in December 2019, however, when you came galloping over the horizon looking like a chubby and amenable Django was over two years ago and since then, up until the pandemonium of this pandemic, you have seemed pretty well chained. To be honest, I had kind of forgotten about you. Yes, I used to see your face occasionally pop up on my Twitter feed and even saw your faded effigy on the occasional forgotten lamppost poster. But you, the man, had become a distant political crush in what seemed like self-exile.

Of course, this all changed when you came out guns blazing with Jamie Foxx-like charm, leading us all in the fight against, as your American equivalent (or so he thinks) likes to call, the “invisible enemy”. My knees again went weak as my social media streams came to life with adorable images of you trying to put on a face mask and giving us firm, directed and intelligent instruction. You responded to the coronavirus as most leaders should have, with real intent and with charismatic presence directing, delegating, encouraging and uniting. In these moments you married Obama-like serenity and Guevara-like electricity with almost Churchillian strength and Mbeki erudition. And in doing so, you won back the people.

You are, once again, in our hearts, and the reason for this is really quite simple. You are an extremely affable chap and when you speak, people genuinely listen. Despite your almost complete lack of leadership up to this point, we still genuinely believe that you are the right man for the job.

Oh, my beloved Rama (maybe not low fat, but certainly healthy), if only you had kept this presence over the past few years perhaps you would have been able to unite the country with such wonderful effect in the manner that you have now – and just imagine what that unity would have done in healthier times? But you didn’t and, despite the evidence so far presented, I am not one of the sycophants who is now going to laud you and spread you thick on my slice of white – as much I would desperately like to.

Although I acknowledge your strong leadership in these unusual times and I am grateful for it, your stoic presence has really only highlighted just how absent you have been up until this virus panic point. Worse, I would certainly argue that the issues around which you have failed to show strong leadership prior to this are far more important, threatening and potentially catastrophic than the pandemic that we are currently fearing.

Now, of course you will say that you were exactly where you needed to be: working hard at solving these issues (selling our country to China?). And if that is true, Mr President, then I am afraid that you have spectacularly failed and no amount of charisma can veneer over this.

The strange thing is that we never really expected you to succeed. It was always going to take more than one term as president to recover from the pillaging and devastation of the Zuma years. But you were the guy who was going to give the next president the glory. You were Mr Fix It, and you were going to take this old jalopy and get it roadworthy to allow those who follow you to ride, beautifully purring, into the sunset.

No, we didn’t expect you to erase the horrors of Zuma, but we did expect leadership and engagement. Something that was so desperately lacking and one of the many things that Zuma robbed us of. We all know that if Zuma were still president, we would simply be showering our way through the pandemic.

We expected you as president to definitely stand up and say “no”. No to corruption. No to failing parastatals. No to dissenting opposition. No to unforgivable unemployment, especially among the youth. No to high crime rates, low confidence levels and an economy that has been classified as junk.

It is desperately sad that it took a global pandemic for you to emerge from your slumber.

The world may be sick, coughing and spluttering, but your party and our country is in ICU, using one of the very few ventilators (or vibrators) that we so desperately need. You are the only man I know who can bring them both back to health. Use this new-found leadership and when the virus is forgotten — hell why not start now?  — talk to us. I mean really talk to us. Don’t be scared or embarrassed to highlight our problems, show us a plan and lead us through it. You are surprisingly good at this. Be the president we desperately deserve. You have now proved to us that you can be.

P.S. I know you can’t do this alone and if you think that I can help in any way, please ask.

Peter Townshend has been a journalist for the past 25 years, writing critical analysis for many of the country’s leading publications. In addition to writing, he has lectured journalism and media studies,... More by Peter Townshend