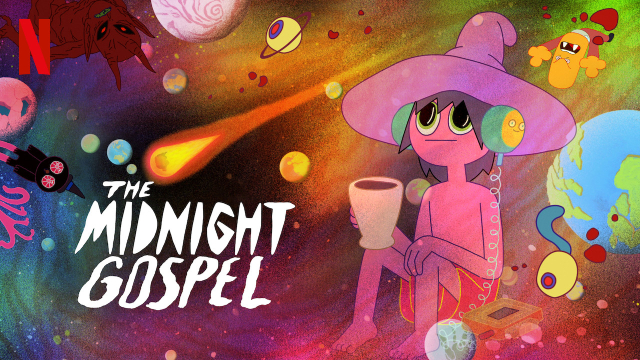 Good day, simulation readers. Before you launch into this review of The Midnight Gospel, I would like you to play your favourite podcast, blast some tunes, or even watch some telly, all while you continue to read. The reasons for doing this will later become clear.

Ready? Good. Then let me begin not with the animated TV series, The Midnight Gospel, released on Netflix on April 20, but rather with some commentary on the concept of originality and how we have in the past labelled a variety of TV shows as “original”, or “unique”, or “genre defining”, or said that they will “change how we watch TV forever”.

Have any of them truly been any of these things? Well, it is probably worthwhile not to get too bogged down at this stage with the philosophical and whether you believe, like Ezra Pound, that “utter originality is, of course, out of the question”, or that originality does indeed exist and lives, according to French philosopher Jean Guitton, in all of us as each individual differs from the others, we can certainly agree that every now and then we are presented by something so different to what we have seen before, that we call it original.

The Midnight Gospel is one such show and it deserves this accolade, unlike many shows before it that have been called truly original, such as Band of Brothers, The Office, The Wire, The Sopranos, Black Mirror, Game of Thrones and others. Of course, all these shows have been in their own small way, groundbreaking, and have certainly had original elements to them, but can they really claim to be original?

Now, I am not saying the claim of originality cannot be, or has legitimately been, given. It’s just a very (ahem) unique group that includes: The Simpsons, CBS Evening News with Walter Cronkite, Sesame Street, Survivor and Monty Python’s Flying Circus. These shows (and I am sure some others), on at least one level each, changed the content of television. But they didn’t change how we actually watch television. I am not talking about the technological revolution here, before all you 3-D TV fans get excited. I am talking about how we both philosophically, and use our senses to, engage with television.

The Midnight Gospel challenges exactly that and before I tell you how, let me tell you about the show. Hold on to your metaphysical seats and your sanity.

The show was created by Pendleton Ward, the mad genius behind Adventure Time who teamed up with Duncan Trussell, whose excellent podcast, Duncan Trussell Family Hour concentrates on new ways of thinking about the self, the world and the universe. For those of you unfamiliar with Trussell, he is an extremely proficient interviewer whose genuine fascination with existence allows his guests to excitedly ramble on about new-age ideas.

The Midnight Gospel follows a pink-skinned, purple-haired slacker, Clancy, who lives in an RV in an alternate dimension called The Chromatic Ribbon. Clancy amuses himself by sticking his head into a multidimensional simulator that looks a lot like a vagina. This allows him to travel to different planets, each going through an apocalyptic event, in order to interview an inhabitant of the planet for his dimension’s version of the podcast: his “spacecast”.

So far, so normal. Just some wacky, psychedelic animated trip, versions of which we have seen a thousand times.

In the span of eight episodes, Clancy speaks to a United States president who, somewhat gleefully, is dealing with the zombie apocalypse via some impressive marksmanship; a deer-dog living on a planet of baby clowns and who is headed for the slaughterhouse; a fish in control of a humanoid robot who captains a crew of adorable cats in sailor outfits; Trudy the Love Barbarian who possesses a rose that can heal minor blood injuries; a prisoner named Bob, who has a soul bird named Jaso and who repeatedly dies; and of course, death himself.

The characters and their worlds, however, play a parallel role to the conversations that they have with Clancy, which provide a secondary dimension and touch on numerous topics such as Euclidean geometry, existence and reality (obviously), punishment, the illusory self, phenomenology, mindfulness, magic, death and other normal chit chat.

But it is not all about these simulated worlds and the conversations, there are deeper philosophical forces at play here as Clancy starts evolving as a character and he begins to understand the interconnectedness of self with all else, including the simulation planets and his home planet.

It’s all good stuff and fairly weird, but I would argue still not original. In fact it all sounds a bit like Rick and Morty but with a heavier dose of psychedelics. And that would certainly be true. But I mean, a waaaay heavier dose. I’m talking so much psilocybin that Paul Stamets would be lying at the bottom of his garden in a haze of kaleidoscopic horror, crying for his mommy.

What makes The Midnight Gospel truly unique (though I suspect someone will write in and say it has all been done before) is its extremely simple understanding that the senses with which we use to engage television do not need to operate in unison.

Think about that for a second, though I am guessing you are struggling to, while listening to your favourite podcast (see what I did there?).

Up until now, television has operated under the premise that the images that we see on screen should largely be accompanied by audio that is practically aligned to these images, or at least exists on the same realm, in the same dimension, have some form of commonality that allows the one to add value to, or enhance the other.

In The Midnight Gospel, this is often not the case.

In fact, the relationship between the chaotic, juicy, explosive, confusing visual orgasm that is happening on screen seems to be perfectly countered by the philosophical ramblings, existential crises, historical ponderings, and surprising emotional beatings that you are listening to. And both require your attention. The discussions are insightful, complex, thought-provoking and even beautiful, mashing together modern society’s thinly veneered security with spirituality, philosophy, psychology, sociology and historical referencing. While this is washing over you, your visual realm is being assaulted by a hilarious, sometimes terrifying, confusing, otherworldly chaos of animation.

Remarkably, as if by magic, somewhere in the second episode, your brain gets used to this duality, and you find yourself performing TV’s equivalence of patting your head and rubbing your belly: achingly twisting your head around the philosophical while bending over in riotous laughter at the absurdity of the visual assault.

Perhaps what is happening is a type of intellectual or emotional synaesthesia as we start hearing the images and seeing the voices, while intellectually smelling tastes and tasting words, and feeling sounds. The Midnight Gospel makes us all a kind of sense-less synaesthete and while that may make no sense, it may just, after you watch the show.

So, yes, The Midnight Gospel may just be the first truly unique show that we have seen in a while, and it achieves this not, as Eugène Delacroix understood, by being inspired by new ideas, but rather with the “obsession with the idea that what has already been said is still not enough”.