The recent devastating fire that nearly destroyed the more than 800 year-old Parisian Gothic cathedral, Notre Dame, has put something important in perspective. One could not but notice that the shock caused by this event was not restricted to Paris, or even France, which one might have expected. Understandably, Parisians have always loved this architectural marvel, which represents one of the pinnacles in the history of Gothic architecture; but many, if not most of the people outside France who have expressed their solidarity with the French in the face of the major damage inflicted on the cathedral that comprises the setting for Victor Hugo’s famous novel, The Hunchback of Notre Dame (which, in French, simply reads Notre Dame de Paris, or Notre Dame of Paris), have probably never even visited the cathedral.

So what can one learn from this (which is the ‘perspective’ I mentioned at the outset)? It is not that difficult to figure this out, if one recalls that it is, after all, a remnant of a bygone age, when the most powerful institution in European society was the (Roman Catholic) church. Of the three major constitutive spheres of society, namely the religious, the economic and the political, one is dominant at any given time. In the period from the Renaissance until approximately the middle of the 20th century, the political sphere was dominant (during the era of the rise of the nation state); since then the economic sphere has been dominant (which is why Lacan noted that the master’s discourse of the present is that of the capitalist). But at the time of the lengthy building process that gave the French Notre Dame, the religious sphere was dominant, and the other two spheres subservient to it.

By this I am not insinuating that the worldwide outpouring of alarm, sadness or grief, and sympathy in the face of the conflagration that engulfed Notre Dame, signifies a longing for a return to religion on a scale comparable to what obtained in the middle ages. But I am suggesting something related to this: that, faced with the near-destruction of Notre Dame, people were reminded, perhaps not consciously, of what it represents, namely an era, gone forever, when spirituality (as opposed to organised religion) was still pervasive in society.

In contrast, the world we live in is virtually completely devoid of spirituality, except in the private domain of some individuals’ (for instance practising Buddhists’) lives – which is not the same as its presence throughout society; in households, communities, towns, cities and so on. Instead we live in an era where the closest thing to the kind of pervasive spirituality of the middle ages is the veritable worship of technology. Which is, of course, nothing spiritual, but does amount to a kind of pseudo-faith, that technology will ‘deliver humanity’ from all suffering, if we would only give it a chance.

And it is my guess that Notre Dame, or rather, its near-destruction, functions as a reminder of what humanity has lost, as embodied in the church architecture of a bygone era. Not simply a concrete sense of spirituality, but more importantly, a sense of human finitude, limitation and fallibility, when confronted by the inscrutable infinity of a supreme being, called God. After all, these cathedrals were built, not as monuments to Mammon, the god of money — as are the corporate headquarters of today – but to the glory of God; hence ‘the distribution of the sensible’ in an upward direction, pointing to the vaunted self-transcendence of the ‘house of God’ towards ‘heaven’. This sense of human finitude is rapidly making way for a hubristic kind of claim, that technology can render us – to use the words of Descartes from the 17th century — ‘masters and possessors of nature’.

One may wonder why it is not a good thing to lose this awareness of our limitedness, and if you do wonder, you have probably already bought into the technological dream of transforming the world in humanity’s image. But if you have indeed been interpellated by the ideology of technologism, consider what will be gained, and what lost. 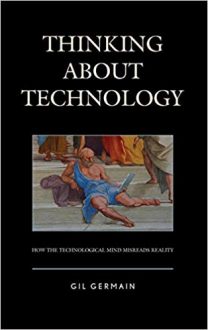 First and most important: as Gil Germain has demonstrated in a persuasive manner in his recent book, Thinking about Technology (Lexington, 2017), and contrary to what one might think at first blush, humans need a sense of otherness, of something that is not of human making, to find meaning in life. Such as an experience of non-human nature, for example. There’s a reason why so many old people, particularly those who have lost their life-partners, take to adopting pets, and develop relationships of friendship with these sentient cats or dogs, confiding in them as if they are people. Just like another person, whose subjectivity does not coincide with one’s own, but with an element of animal-alterity added, such animals impart a sense of meaning to old people’s lives precisely by being ‘other’ than themselves.

Second, in contrast with the time when cathedrals were the incarnation of humanity’s relationship with the (divine) ‘Other’, our own era increasingly exhibits the contours of an exhaustively constructed world — that is, one technically constructed by humans. So what, you might respond — cathedrals like Notre Dame were also of human construction. To be sure, but as a reminder of the insufficiency of all things human – the cathedrals point beyond themselves to something Other, by which human finitude is defined. In this respect these cathedrals exemplify the ‘gathering’ of what Heidegger called the ‘fourfold’ – Earth, Sky, Mortals and Divinities – in a work of art (see the chapter on this in my book, Intersecting Philosophical Planes (Peter Lang, 2012, p. 345). And at a subliminal level, the fire at Notre Dame is a forceful reminder of this indispensable unity of fundamental human values, which – as Germain’s discussion of technology shows in this beautifully written book – humanity is rapidly losing.

No doubt to the surprise of many readers, Germain argues that a certain kind of ‘alienation’ or otherness is a good thing – the kind you experience in proximity to the otherness of a ‘natural being’ like a leopard, or a snake that unexpectedly crosses the footpath you are walking along in a forest. It addresses you unmistakably as an emissary of some alien realm, and throws one back on one’s own nature – in the case of a potently venomous snake, your inescapable mortality. I am writing from experience, having recently faced a highly neurotoxic Cape cobra on a mountain path, the snake’s splayed hood serving as a warning that I would approach it at my own peril. This experience confirmed the validity of Germain’s insight in no uncertain terms.

The most important insight in Germain’s book is that it is a colossal mistake to believe that technology serves human ends, even if it is ostensibly the case. Doesn’t it make life much more comfortable and pleasant? Think of refrigerators and CD-players. Of course this is the case up to a certain point. BUT – and it’s a big but – if efficiency and optimal functionality are the decisive criteria for assessing things, as they are in technological development, what does this imply? In an illuminating analysis of Jean Baudrillard’s critique of technology, Germain reminds one of the thought-experiment that Baudrillard invites one to perform: from a human perspective technology promises the kind of efficiency people want (note that promoting the value of ‘efficiency’ exclusively devalues many other values traditionally adhered to, such as beauty, love, moral goodness, and so on). But what would humans look like from technology’s perspective? 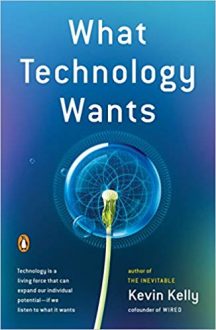 As Baudrillard reminds one, from a technological perspective humans no doubt appear as filthy, inefficient, inadequate, fallible little microbes, which only stand in the way of its optimal actualisation. Do you detect echoes here of James Cameron’s Terminator movies and their sequels, where the machines are intent on wiping out the whole human species? You would be right. One of the high priests of technology, Kevin Kelly, whose work is discussed in detail by Germain, actually confirms this implicit thrust of technology in the title of his book, What Technology Wants (Penguin, 2011). What it wants, is for humans to step aside, or even better, to disappear, to hasten the realisation of techno-heaven. Perhaps this is what people are sensing, subliminally, when faced by the near-destruction of Notre Dame. It embodies our humanity, which is faced with extinction in more than one sense today.