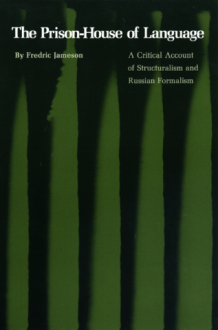 In The Prison-House of Language (Princeton University Press, 1972) Fredric Jameson opens the Preface with the following thought-provoking remark (p. v):

The history of thought is the history of its models. Classical mechanics, the organism, natural selection, the atomic nucleus or electronic field, the computer: such are some of the objects or systems which, first used to organise our understanding of the natural world, have then been called upon to illuminate human reality.

Most people reading this will probably not have realised that human understanding of nature, and of society, has unavoidably relied upon a historically successive series of ‘models’ — or metaphors, if you like — for their interpretation. In the time of Newton, for example (‘classical mechanics’, above), every aspect of the world was subjected to the metaphor of a ‘machine’ or ‘clockwork’ for understanding it — nature, society and even the individual. The biological metaphor (or model) of the ‘organism’ enlivened biology and Romanticism during the 19th century, when both the living natural entity as well as the ‘nation’ was understood in organic terms.

The same goes for other metaphors employed as models for grasping the character and operation of individual and collective entities. In The ‘Prison-House of Language’ (a metaphor deriving from Nietzsche), Jameson proposes to show that ‘language’ itself is employed as a model by formalism and structuralism as theoretical approaches to understanding reality (because both of these, by taking linguistics seriously, concern the very structure of language). I do not here have the space to elaborate on a history of structuralism; suffice to say that Jameson shows at length how a newly emergent model – machine, organism, atomic nucleus, and later language — ‘furnishes a new body of material in terms of which the old problems are raised again in new and unforeseen ways’ (p. vii). While I disagree with Jameson about ‘old problems’ — new models tend to change the very appearance of the ‘problems’ too, giving them a novel twist — he does enable one to reflect critically about the model currently in vogue.

Hence, if language was the model for understanding social reality through structuralist (and some poststructuralist) lenses in the work of De Saussure and Lévi-Strauss (and Lacan and Derrida), what is the model, or metaphor, that succeeded that of language, and by means of which we have for some time now been looking at ‘old problems…in new and unforeseen ways‘? Jameson (in 1972) gives one a clue in advance of the acknowledged advent of this model where he writes (p. viii-ix):

The deeper justification for the use of the linguistic model or metaphor must…be sought elsewhere, outside the claims and counterclaims for scientific validity or technological progress. It lies in the concrete character of the social life of the so-called advanced countries today, which offer the spectacle of a world from which nature as such has been eliminated, a world saturated with messages and information, whose intricate commodity network may be seen as the very prototype of a system of signs. There is therefore a profound consonance between linguistics as a method and that systematised and disembodied nightmare which is our culture today.

It is difficult not to home in on the word, ‘network’ in this excerpt, linked as it is with commodities, information and messages, and for obvious reasons. This word neatly encapsulates, metaphorically, the shape of the globalised world of today, which was evident to Jameson as long ago as 1972. What is astonishing is the fact that, even then, he was disabused of any belief that culture at the time was anything more than a ‘systematised and disembodied nightmare’, which has arguably been exacerbated since that time, in my view — but then, like Jameson, I am not one who believes that the ‘network society’(Castells) is an unadulterated blessing.

Through its electronic information ‘network’-character it has made a new kind of culture, and society, possible, to wit, ‘online society’. At first blush this might strike one as an exaggeration — surely less time is spent in ‘online’ flows than in ordinary three-dimensional space? That may be the case, although I’m not sure about it; every time one sees new reports of the time spent online by teenagers, for example, it seems to have been ratcheted up — but it is not the quantity of time alone that matters here. The decisive thing is what relative value is attached to it, as opposed to what is still thought of as sequential (or clock-) time. 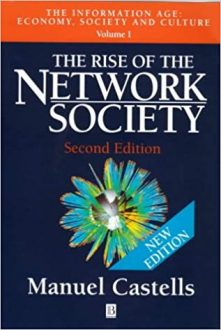 Following Manuel Castells (in his monumental The Rise of the Network Society; 2010; read here), I agree that the time spent online – on social networking sites such as Facebook, for instance – is given priority over ordinary, sequential time. Online time is dominant, and one should not be confused by ‘online time’, in Castells’ idiom, being in the ‘space of flows’ – the dominant mode of space today, which permeates our lives at many levels, mainly through being connected to the internet, but not only during such periods of connectedness. When you enter an airport, or a high-speed train station, for example, you enter the space of flows, and when you see a courier van hightailing it down the freeway, you know it is part of the space of flows.

Not surprisingly, therefore, the dominant mode of time, which corresponds with the ‘space of flows’ as its spatial counterpart, is what Castells calls ‘timeless time’, which is never reached, of course, but always approximated – in the shape of quasi-instantaneous financial transactions, for example, which occur globally with the tap of a finger on a laptop keyboard.

So what about it? How does all this network activity make a significant difference to what one might call ‘online civilisation’? Let me answer via a detour – that of Jean-Jacques Rousseau’s prize-winning essay in an 18th-century French competition on the question, proposed by the Academy of Dijon in 1750: ‘HAS THE RESTORATION OF THE ARTS AND SCIENCES HAD A PURIFYING EFFECT UPON MORALS?’ Rousseau’s negative essay-answer was titled ‘Moral Effects of the Arts and Sciences’, and, perhaps contrary to expectations (this was the very optimistic era of the Enlightenment, after all), he was awarded the prize. Here are two very telling excerpts from the first part of the essay:

…our minds have been corrupted in proportion as the arts and sciences have improved. Will it be said, that this is a misfortune peculiar to the present age? No, gentlemen, the evils resulting from our vain curiosity are as old as the world. The daily ebb and flow of the tides are not more regularly influenced by the moon, than the morals of a people by the progress of the arts and sciences. As their light has risen above our horizon, virtue has taken flight, and the same phenomenon has been constantly observed in all times and places.

Rousseau then goes on to list historical examples to illustrate his claim. But earlier in the treatise he provides this diagnosis of the French (in fact, European) society of his time (more than 250 years ago), and I have selected this excerpt because it seems to fit our own age of online ‘friending’ and ‘unfriending’, ‘trolling’, ‘scamming’ and ‘throwing shade’ so well:

We no longer dare seem what we really are, but lie under a perpetual restraint; in the meantime the herd of men, which we call society, all act under the same circumstances exactly alike, unless very particular and powerful motives prevent them. Thus we never know with whom we have to deal; and even to know our friends we must wait for some critical and pressing occasion; that is, till it is too late; for it is on those very occasions that such knowledge is of use to us.

Following Rousseau’s insights, one could comfortably state that the very network-character of our society, which has many ostensible advantages regarding commerce, finance, information-exchange and communication generally, has laid the basis for a comparable deterioration in ethical behaviour, for the problematisation of moral questions, and for ethical indifference to the plight of the natural environment, as manifested in many media articles on a virtually daily basis. And the irony is that this has been brought about by contemporary ‘advances in the arts and sciences’; Jameson’s and Rousseau’s historical pessimism therefore seems to me justified.