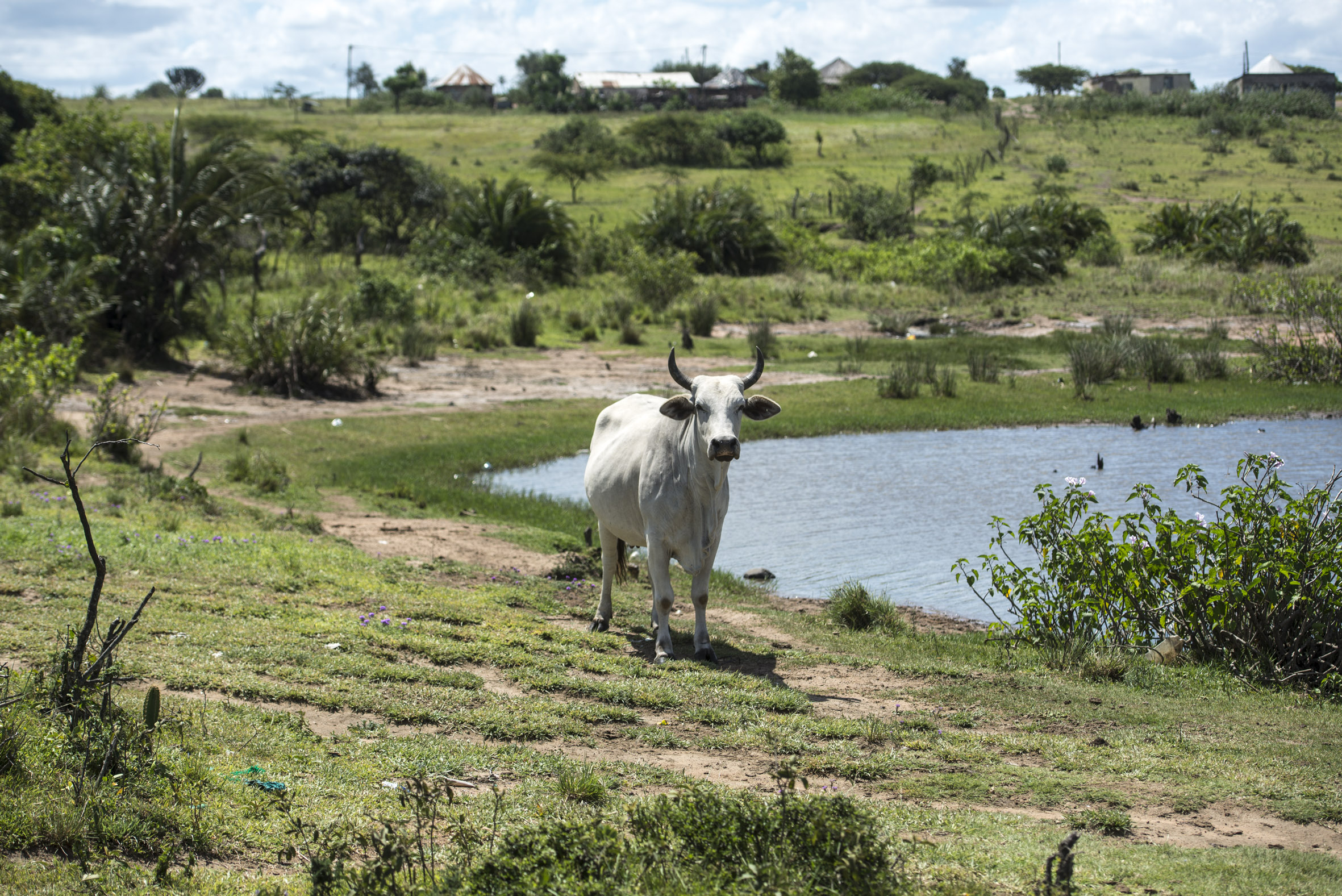 Land, slavery and cattle matter: To move forward, we need to look back

Societies emerging from violent colonial conquests must deal with redress, in order to create a new social and economic order. South Africa is one of them. Yet the memory of conquest occupies a precarious position, at risk of being erased by distortions, contestations and exasperation. In three articles, I propose to unpack key facets of colonial conquests, to broaden our understanding of the past and the land story. This is about legacies of enslavement of indigenous people and the taking of their cattle by Europeans.

We remember apartheid. Its human tragedy, its perversity, its neurosis, its illogic. Many across the globe fought against it. Some supported it. Others were indifferent. But we remember it. Black South Africans remember its totalising forms:  the exploitation of African labour for the benefit of the white economy; the expropriation of the land of Africans without compensation; the intolerable living conditions calculated to cause the physical destruction of the African populations; the creation of native reserves and ghettos; the mass and arbitrary killings of Africans;  the indifference to diseases in black areas; and the confiscation of African livestock. The international community gave us the language of protest, of denouncing the inhumanity of apartheid: in 1973, apartheid was declared a crime against humanity.

We have, however, forgotten what preceded apartheid: the brutalising colonial conquest of the British. For two centuries before apartheid formally began, the British had long laid the seeds of racial segregation, property dispossession, and the construction of a racial oligarchy. To make sense of the disruption of native lives, we should first consider the role played by them. The shaping of South African society by the British can be categorised into themes: labour, land, cattle and imposition of an external culture – coded as “civilisation”. The enslavement of local people is one of the most significant, yet the least spoken of, periods in the shaping of modern South Africa.

When the Dutch East India Company dispatched settlers to the Cape in 1652, they discovered that labour was in short supply. In 1444 the Portuguese had begun the “slave trade”. Dutch law, however, prohibited the enslavement of the local native population, hence the company could not simply commandeer the Khoikhoi people into slavery. Within a few years, however, a solution was found. People could be imported from then Batavia (Sri Lanka), Guinea, Bengal, Angola and Madagascar to be enslaved. These enslaved people would later form part of an amalgam of a new society of the Cape, a new language, and a new “race” – the coloured people. The British took control of the Cape in 1806. They set out to distinguish themselves from the Portuguese and the Dutch and would ban slavery.

A forgotten fact is that not all slavery was banned. Only the importation of external people into enslavement. Domestic enslavement remained. As the demand for labour to support the emerging agriculture economy grew, slavery also increased in scale and intensity. The industrial revolution, however, altered the labour needs of the British economy. By the 1830s the static slave labour in the agricultural economies such as the Cape was out of vogue. To serve the industrial needs, labour had to be mobile. Hence slavery, at least in its traditional form, was no longer seen as useful to the British economy. It was completely abolished in 1834.

In the Cape, however, things were different. There was no industrial revolution to speak of. The agricultural economy, the export markets, the sales of Cape wines were thriving.  By 1834, slavery had extended to the whole of the Western and Eastern Cape. In areas like Graaff Reinet, Stellenbosch and Worcester it was reported that up to 70% of all farmers owned people whom they had enslaved. There were some 40 000 enslaved people (a 40% increase from the numbers of 1806 when external slavery was banned), most of them local – the Khoikhoi, the Xhosas and the now new coloured population. For 30 years the British had presided over a slave society.

It is worth noting the value of enslaved people. In 1831 Sir Lowry Cole, governor of the Cape Colony between 1828 and 1833 explained that the Cape owners of enslaved people were unlikely to cooperate with efforts to end slavery. They could not give up “what constituted their existence”. Enslaved people were a form of investment in property. Owners regularly sank their entire capital investment in slaves. Corporations were established purely for the business of slave ownership. Children of slaves were property of the slave owner. In 1833 the average price for the sale of a skilled male person into slavery was about £150. Women, however, were sold for less: in one instance a 16-year-old “housemaid” was sold for £16, in another a 34-year-old “washerwoman” for £64. Mortgages could also be registered in the name of an enslaved person. In 1834 the total mortgages attached to enslavement amounted to £400 000. Despite its perversity, slavery was good business.

Compensation for the ‘loss’

The year 1834 would also not mark the end of slavery in practice, but only a change in the law. Whites in the Cape insisted on retaining the labour of slaves. The British Parliament agreed. Slavery would change into new “contracts of apprenticeships” – only the form of labour changed, the substance did not. Another demand was compensation. The Cape slave owners demanded some £3-million. Although this was not agreed to, some £1-million was paid to compensate South Africa slave owners. To put matters in context in today’s currency, that would be the equivalent of about £115-million. In rand terms, that is a staggering R2.4-billion in compensation. Enslaved people were indeed valuable property. They were integral to the Cape economy.

Despite the generous compensation, owners of enslaved people retained the unfree labour of their former slave labourers, now as “apprentices”. That would remain the case until a new law, the Master and Servants Act was passed. This law did not change the conditions of labour. The basic elements of unfree labour remained. A hundred years later – in the 1950s – these laws would also be replaced by labour laws. The shameful past, rooted in slavery, of our legal regime continues, however.

Enslavement of persons, their sale in “markets” and the forced labour were not mere blights in the system. This was part of a larger story of conquest, which included cattle confiscation. History books introduced the fiction of cattle trading between the European settlers and native populations of the Cape. The idea is that Africans received shiny objects – mirrors, brass, jewellery – in exchange for livestock. This is a discredited view, which has no foundation in history. Cattle were confiscated by violence.

Cattle were the main symbol of wealth among Africans: they had multiple uses, as food, labour or in trade. They were also symbolic, connecting families and villages in cultural rites and maintaining the links between the living and the dead. The violent seizure of African cattle by Europeans thus broke the bonds of society and deepened dependence in labour. We should tell the story from the last frontier war of the Cape.

In the last frontier war of 1878, the Xhosas were “thoroughly beaten”. Sarhili, the Xhosa king, was a hunted fugitive. The Xhosa had lost 45 000 head of cattle. The women and children taken into exile. Yet this was hardly the first loss of cattle. Each frontier war was marked by cattle ransom, the surrender of cattle as a suit for peace. In his autobiography, Sir Harry Smith, writing about the sixth frontier war, refers to a “capture of 5000 head of cattle” in one day alone of August 1836. And another 13 000 head of cattle from “Maqoma’s kraal” in that same year. When that war ended, Benjamin D’urban, colonial governor of the Cape, wrote “there have been taken from [the Xhosa] also, besides the conquest and alienation of their country, about 60 000 head of cattle, almost all their goats, their habitations everywhere else destroyed, and their gardens and cornfields laid waste”.

The British strategy was total annihilation of any semblance of political and economic independent existence. Without cattle, the Xhosa would be wholly dependent on the wage economy. It was to the same colonial government which had destroyed their livelihoods that they turned for survival to cope with the unprecedented levels of starvation.

At the end of the wars of conquest the Glen Grey Act of 1896, applicable to the Cape was passed.  This was introduced by the prime minister of the Cape Colony, at the time Cecil John Rhodes, who explained that the point of the Act was to give powers to the government to restrict land which could be occupied by Africans. In this regard, village management boards appointed by the government would be introduced. In addition to having the powers to allocate and arbitrarily reduce the land, these government boards “would limit the amount of stock on each agricultural lot, and therefore overcrowding would be prevented”.

The Glen Grey Act restricted the amount of land that could be allocated to Africans.  Moreover, it gave the government sweeping powers to reduce African stock.  The consequences of keeping stock in excess of their allocation by government-appointed boards were severe.  Cattle could be impounded, sold and the owners would be punished, sometimes through criminal sanctions.

The structure of the Glen Grey Act would later be replicated in the Native Land Act. In its opening section, the Native Land Act prohibited the ownership of land by African people without the permission of the government.  In the areas allocated for native settlement, the extent of the land that could be occupied by natives was itself severely curtailed.

It was in this world that the rush for diamond and gold of the late 19th century took place. British speculators who descended on South Africa were able to make a fortune. Their pioneer was Rhodes. He believed it useless to have grand political visions without the cash to pursue them. In Kimberley he would form De Beers Consolidated Mines Limited to control 90% of the world’s output of diamonds. A few years later, in 1887, Rhodes formed Gold Fields of South Africa Limited, one of the richest and most powerful companies in the world.

Politically, the discovery of gold was even more important than the discovery of diamonds. With the financial means thus obtained, Rhodes was able to devote his attention to the organised settlement of today’s Zimbabwe. His importance to the British economy is evident from the 1889 decision of Queen Victoria to grant Rhodes’s company a Royal Charter of Incorporation. The company was armed with most of the powers of a modern state over the northern territories.

The era of extractive labour had thus begun. Although there was a war between the Dutch and the British in 1899, it was temporary, and soon those hostilities were forgotten and a new country established in 1910, the Union of South Africa. Apartheid – founded on racial supremacy – was installed as formal policy in 1948. Without the conquest of the Cape by the British, apartheid would not have been possible.

Legacies of enslavement and cattle theft are forgotten in our memories of land dispossession. Yet, they created conditions for the seizure of the land. They amplified the effects of land dispossession. If the land story is to be told, the legacies of enslavement and cattle theft must receive equal measure of attention. And this is not about the past, but about its complexities and the various ways in which it continues to shape the present. Thinking meaningfully about the past also means expanding the horizons of our enquiry. Our imagination of the possibilities of the future are constrained by our impoverished understanding of the past. When all is said and done, British imperialism was the key enabler of apartheid. It is not possible to confront the apartheid past without grasping what preceded it.