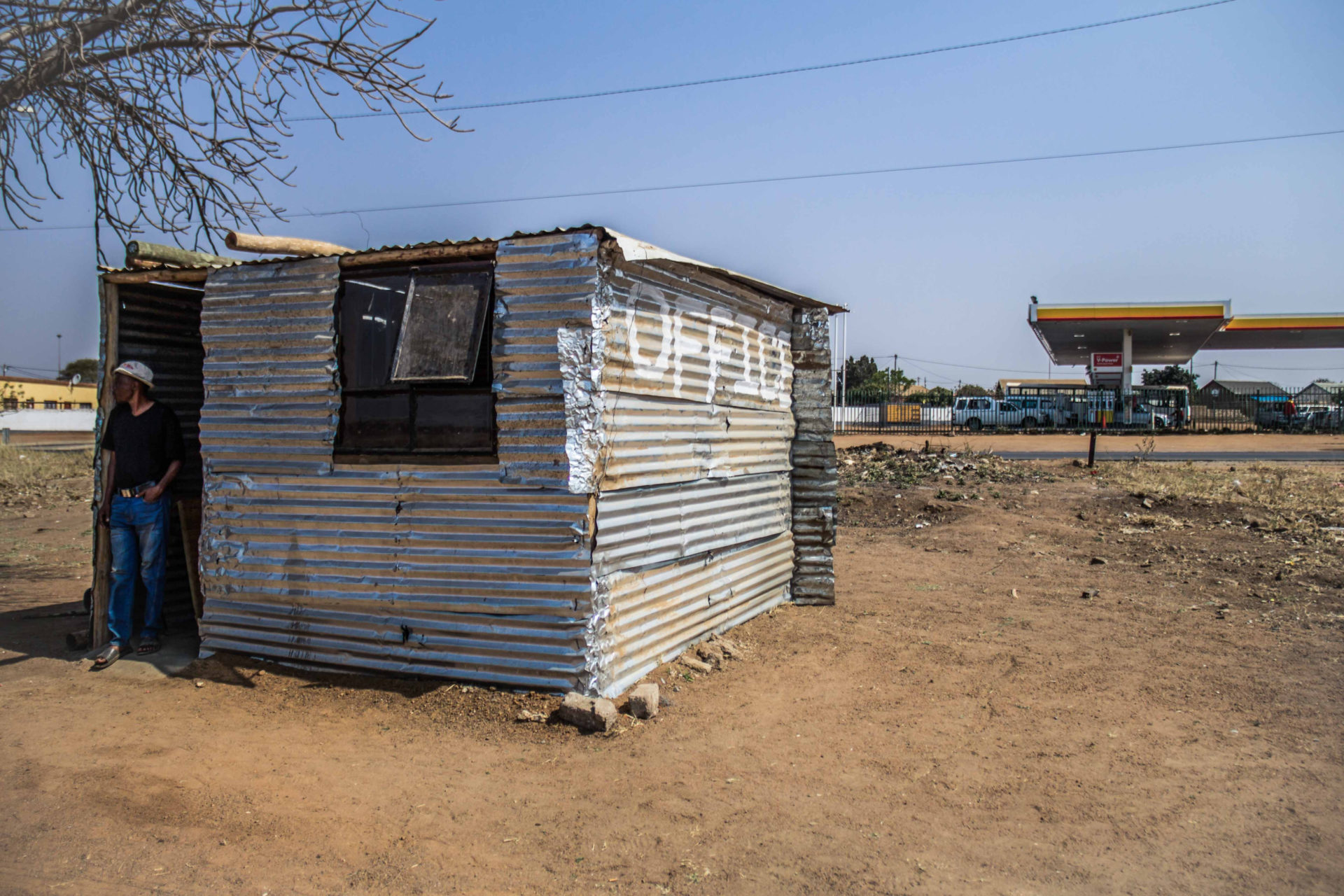 I recently went home to Soshanguve. It sparked this article out of me. In Grade 6, my human social sciences teacher came to class one morning and announced that we would be learning about concentration camps for the week, during that cold winter’s month in 2002.

The historical narratives shocked and scared me as a young and impressionable boy. What caught my inquisitive and insatiable 12-year-old-boy attention most, however, was the definition.

Meneer Diale defined concentration camps simply as places where large numbers of marginalised people were kept in appalling conditions to provide forced labour or to await mass execution by those in power. Reading and hearing the history about Jews, disabled people and Africans being imprisoned under these circumstances felt eerily familiar.

At the time I seriously thought that Soshanguve, my own township, was a concentration camp because it fit his definition perfectly. Similar to what Meneer Diale described, my block was teeming with poverty, disease, inadequate sanitation, improper shelter and people crammed into tiny sleeping quarters not to mention crime, drugs, teenage pregnancies, high illiteracy and a multitude of violence.

Townships were, and still are, mired in squalor, abject poverty, a lack of resources, poor infrastructure, malnutrition and the spreading of diseases that lead to preventable deaths and disabilities.

I could not spot much difference then and, 18 years later, I can still see the similarities. People are locked into townships through the barbed wire fences of poverty, crime, poor education, a dearth of opportunity, fear, hopelessness and inferiority complexes  — violence which is structurally and symbolically institutionalised.

The threat of extermination from malnutrition, disease or worse still hangs over their heads like a poisonous gas — nervousness permeates the air like a coiling miasma.

Townships have their genesis in the colonial and apartheid state —  and we cannot understand these strangulating places outside of this atrocious past, because the progenetic effects are still being seen and felt today.

Townships in the South African context refer to the previously (and currently) disadvantaged, often underdeveloped living areas that were created by the apartheid masters using various legislation to ensure racial segregation.

They passed laws to ensure that everyone adhered to their idea of “race” hierarchy. At the top of the pyramid were whites, then Indians, then coloureds and lastly blacks and each group was told where they could live, work or play — down to what they could study and how much they could earn.

Black people were subjected to countless pieces of legislation, but for the purposes of this article only a few will be mentioned.

Townships or “locations” (“lokasie” in Afrikaans and also affectionately known as “kasi” in Tsotsitaal) were usually built on the periphery of towns and cities for a concentration of cheap labour to inhabit.

One of the first laws to be passed by the apartheid government was the Group Areas Act of 1950. This Act designated spaces for particular races, so there were different townships for different non-white groups, for instance in Cape Town, Grassy Park was for coloureds only whereas Khayelitsha was designated as a blacks-only area. In 1966 District Six was designated a whites-only area which meant that non-whites were forcibly removed from their homes. The government used bulldozers and the military to enact such violence.

They also passed the Bantu Authorities Act of 1951 and the Promotion of Bantu Self- Government of 1959 to further entrench apartheid. The two laws respectively put in place the notion that blacks were not South African (and sub-human) and belonged in spaces far away from their white counterparts. Blacks needed to have a permit or dompas (“dumb pass”) in order to be allowed access to either work or live in South Africa.

Blacks were forced to stay in the “make-believe states” of the homelands or Bantustans such as Venda and Transkei, because they did not have citizenship in South Africa.

As early as 1922, the Transvaal Local Government Commission said: “The Native should only be allowed to enter urban areas, which are essentially the white man’s creation, when he is willing to enter and minister to the needs of the white man, and should depart therefrom when he ceases so to minister.”

A great deal of the planning efforts of the state were directed at restricting and regulating African urbanisation and controlling black urban settlement.

One of the most violent actions by the apartheid government was to place townships right near the most wealthy suburbs, for example Alexandra and Sandton, which are separated only by a polluted river. Those living in townships can easily witness the wealthy Sandtonites drive past in their luxury cars on to spacious and air-conditioned mansions while they have to live in rat-infested, sewer-tainted shacks that aren’t suited to any weather (they are boiling hot in the summer sun, freezing in the biting winter or flooded during the Highveld storms). Sandton is the richest square mile in Africa and right next door to one of the poorest communities in the world.  Opulence is violence.

The distribution of urban poverty in post-apartheid South Africa stems, at least in part, from  the reluctance by previous and current dispensations to acknowledge that Africans permanently live in towns, instead of remaining in rural areas or solely visiting urban areas to provide cheap labour.

One of the ways in which the apartheid government entrenched segregation and subjugation of blacks was through land dispossessions. Land dispossessions are imperative in this discussion about townships because without them we wouldn’t be here trying to answer the “land question” and the overpopulation in our concentration camp-esque locations.

I would argue that at a fundamental level, townships are a product of multiple and massive land dispossessions that have taken place since the arrival of Jan van Riebeeck.

Forced removals, relocation and segregation of blacks by whites started as early as 1658 when the Khoi and San people were told by Van Riebeeck that they couldn’t live west of the Salt and Liesbeek rivers in the Western Cape.

In later years, one of the most important acts was passed, it is important because it has shaped land policy in South Africa in a huge way by laying the foundation for legal forced removals (and overpopulated townships).

This important act is known as the Native Land Act of 1913. It should be noted that 2020 marks 107 years since its inauguration and its stranglehold is still being felt. Sol Plaatjie captured this reverberating reality well when he said “[a]waking on Friday morning, June 20, 1913, the South African native found himself, not actually a slave, but a pariah in the land of his birth.”

The Land Act restricted the area and amount of land for lawful African or black occupation. This Act forcefully stripped land from African farmers, cash tenants and sharecroppers. At its core, the Land Act’s key objective was to eradicate independent black farmers. This was done to provide cheap labour for the growing white industries of gold mining, manufacturing and even commercial farming.

The Native Land Act resulted in only 13% of land being reserved for the black majority while the remaining 87% was given to the white minority. Ten years later in 1923, another act, the Native Urban Areas Act of 1923 was passed which made it illegal for Africans to buy or own land in urban areas/cities because cities were thought of as being “white man’s territory”.

It goes without saying that in more than two decades of so-called democracy the patterns of land ownership and distribution have not changed that much because the ruling party has failed to address one of the most emotive issues in our society. We are honestly ignoring the land question at our own peril. It is a ticking time bomb.

Landlessness, poverty and hopelessness are common themes in most South African townships, a similar leitmotif was also seen in concentration camps throughout history. Soshanguve is no exception. I was born, bred and buttered in Soshanguve, the fifth largest township in South Africa with approximately 500 000 people of different tribes and languages inhabiting the space.

Soshanguve is an acronym for Sotho, Shangaan, Nguni and Venda, indicating that all official black languages are represented in this area on the outskirts of Pretoria in Gauteng — a rare occurrence during the apartheid days as divide and conquer was the rule of the day.

It was established to house the landless and throw-away people in multiple stages. It is inhabited by those who were dispossessed of land in Hammanskraal, those resettled from Mamelodi and others banished from homelands such as Bophuthatswana who refused to denounce their languages and cultures to be part of the Tswana supremacy in places such as Ga-Rankuwa.

Although Soshanguve’s development is tiered, meaning not everyone who lives there is affected by abject poverty (because there are places with huge houses, tarred roads, street lights, a few malls and stadiums and even a university in the case of Tshwane University of Technology) I was unlucky enough to grow up in the poorer parts that were ill-resourced and got no state attention. For instance, our area only received electricity and water when I was 15 years old. So, for the first decade and a half of my life I was living in darkness and had to stand in long queues, with a wheelbarrow and buckets, for water. We had very little to eat. For the first two grades of my schooling, we were taught under a tree. Needless to say, not much has changed with regards to poor service delivery. When I went home recently, there was no electricity for three consecutive days because izinyoka allegedly stole cables. Traffic lights that were broken and destroyed over five years ago during a service delivery protest have never been replaced.

These conditions of squalor are common in most townships across the country, in both formal and informal settlements.

Most young people suffocate under these conditions and only a few can fully escape this apartheid-designed labour camp which are still a noose around our necks, shackles around our ankles. We are asphyxiated by doom.

I have won countless battles and many will think I am making the stories up if I narrate them. Townships should not be romanticised because we are poor, landless and black, but we also cannot pretend that people are not sophisticated and nuanced in their navigation of their very unfair realities.

Many people like myself are resilient and we bounce back to forge on and fight to stay alive, we survive and even thrive in the very places built for us to fail, to succumb, to provide cheap labour.

As Holocaust survivor Viktor Frankl wrote: “Everything can be taken from a man but one thing: the last of the human freedoms — to choose one’s attitude in any given set of circumstances, to choose one’s own way.”

Sadly, however, most young people are lost and do exactly as the apartheid masters intended, they disappear in the harshest and most gut-wrenching ways.

Perhaps then, if we admit what townships truly are, we will not try to rehabilitate something that is not meant for the living and we will stop guilt-tripping those blacks who live and stay away, long after they have made it out.