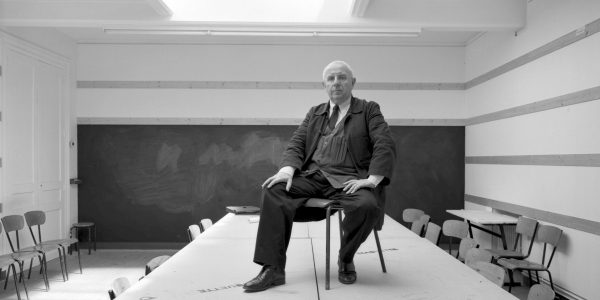 Paul Virilio is a very important, if unusual, thinker.

An architect and philosopher, his work has transformed the way people think about the relationship between speed (or acceleration), visuality (or visual culture), technology, the military, and the distinctive mode of existence of people in the early 21st century. This is how Virilio expresses the links among these phenomena in succinct terms (in an interview with John Armitage, in Virilio Live: Selected Interviews, Sage, London, 2001, p. 119):

What I’m trying to show is the really powerful character of the images that are produced everywhere around us and that no one is analysing. Because images have become munitions. Their delivery and impact have the same speeds as the impact of a bullet. The arms [weapons; BO] of the future will much more resemble a TV than a mortar.

Few people probably ever think of the ubiquitous images rushing at them from all directions as weapons, but it is not that difficult to grasp, if one considers that the ‘charge’ of such images is usually information which is not that innocent. They are usually either branded images, promoting a branded product, or images of so-called ‘celebrities’, who are ‘human brands’ — in both cases clearly images heavily invested with certain interests — or they are news images aimed at influencing the way viewers think and act, and so on. In short, media images are ideologically-charged ‘bullets’ of sorts, and Virilio is one of the few philosophers, if not the only one, in the world making this explicit. 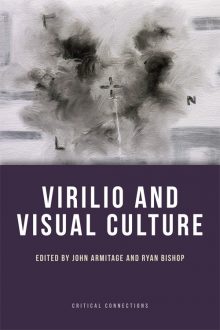 In Virilio and Visual Culture (Edinburgh University Press, 2013), John Armitage and Ryan Bishop (the editors) sum up Virilio’s work as follows (pp. 1 and 2): “Paul Virilio’s major contribution to contemporary European thought has been to demonstrate that questions of visual culture are not only academic and cultural, aesthetic, historical, critical, philosophical and anthropological questions but also extremely important political questions…Virilio reminds us that the battlefield [meant literally; BO] is primarily a visual and sensory domain: perception as aiming and targeting, hiding and uncovering, and that urban centres result from paths of movement and means of defence, all of which responds to and alters the visual field. The visual domain, in Virilio’s theoretical work, no matter how it manifests itself, is always concerned with movement, speed, time, the built environment, technology and their complex interactions, resulting in the constantly increasing militarisation of all aspects of daily life.”

If the connection between the visual field and ‘militarisation’ seems dubious, think again. Many of the technologies that already affect our lives significantly have a military origin – the internet, to begin with, which started as a military invention called DARPANET, before it was opened up to commercialisation and private communications. In a recent article, Rob Lever foregrounds some of these military links, although he does not mention the military by name, where he quotes the founder of the Future Today Institute, Amy Webb, as commenting on the future of smartphones, to the effect that:

2018 “marks the beginning of the end of traditional smartphones” and [she] sees a transition to a new era of computing and connected devices based on voice, gesture and touch.

“The transition from smartphones to smart wearables and invisible interfaces — earbuds that have biometric sensors and speakers; rings and bracelets that sense motion; smart glasses that record and display information — will forever change how we experience the physical world,” Webb writes.’

Which all goes to show just how pertinent Virilio’s work (together with that of other thinkers on technology, like Gilbert Germain, Sherry Turkle, Jean Baudrillard, Manuel Castells and Bernard Stiegler) is for understanding the era we live in. What interests me is the psychological effect of the phenomena highlighted by Virilio, and what they imply with regard to what might be termed an ‘anthropology of the present’. 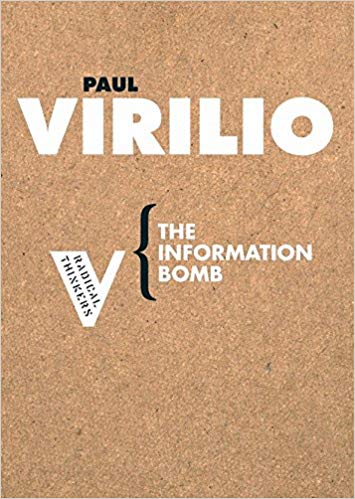 In all of his work Virilio highlights the central function of speed or acceleration, which does not leave human existence untouched, of course. In The Information Bomb (Verso, London; see for example pp. 66-67), already, he wrote about the shrinking of time (that is, the acceleration of our lives’ tempo) that accompanied the invention and use of mobile phones, which enable employers to ‘abolish the distinction between working hours and private life for their employees…’ Just how far-reaching such developments really are in psychological (and psycho-somatic) terms is evident from a recent article by Jake Kwon and Alexandra Field on South Koreans ‘working themselves to death’.

Referring to a Korean man who died suddenly at work for no ascertainable reason (except for the increasingly unbearable acceleration of his life, one might guess in the light of Virilio’s research), they write:

Chae Soo-hong worked at a food supplier specialising in jangjorim, a popular Korean side dish of beef cooked in soy sauce. His primary duty was to make sure production was up to standard and on time.

During the week he would travel to the company’s factories and oversee production. On Saturdays, he went to the main office to do paperwork. Even after coming home from work, his job wasn’t done: though it wasn’t his explicit duty, he’d often spend the evening fielding calls from factory employees, mostly foreign migrant workers who needed help adjusting to life in South Korea.

It is in the light of such occurrences that Virilio is betting on technological changes in speed and acceleration continuing to affect human lives, usually without people even being aware of it. In a disturbing paper titled ‘The illusions of zero time’ (included in Virilio and Visual Culture) he analyses the relation between technologically mediated and produced televisual images and the ‘last horizon of visibility’ (p. 28), which is also an immovable limit, namely the speed of light. The overall effect of this – as well as of many other, related phenomena, such as virtual-reality helmets and simulators – is what Virilio calls the ‘cyberneticisation of geophysical space’. In concrete terms, this means that the ‘optical depth of the human environment is reduced’ (p. 28) or that there is a disconnect between the time-space of television viewers’ bodies (at the time of their viewing of television programmes) and the ‘frame of the screen’ or ‘televisual horizon’ (p. 29).

If this seems innocuous, consider Virilio’s phenomenologically oriented question (p. 30): ‘Isn’t the wrong that telecommunications technologies are committing here, by isolating the present from its “here and now” in favour of a communicative elsewhere that is no longer the site of our concrete presence in the world, but merely of a discrete and intermittent telepresence? The real time of telecommunications does not stand opposed, then, as is generally claimed, simply to the past – to “the recording” – but to the present and its very nowness – an optical switching between the real and the figurative that refers back to the physical observer present here and now, the only persistent factor in an illusion in which the body of the witness becomes the sole element of stability within a virtualised environment.’

Again, the reasons for Virilio’s concern may elude one unless one recalls the character of one’s spatiotemporal ‘life-world’, which contrasts starkly with the character of televisual images as described by Virilio – images which have, ironically, been embedded in our life-world, and perhaps to our detriment. The latter possibility is raised by several news articles I’ve come across recently, including one on multimedia and one on the possibility that the use of (smartphone) screens is causally linked to children’s ‘mental health problems’.

In short, we should take Virilio’s work very seriously.