Analysing Amatomu data from the past 2 months reveals some interesting — and not so interesting — trends in what makes a blog post a hit.

Ok, here goes. Thanks to Vincent Maher’s (of Amatomu) kindly SQL queries, I have the most-used links on Amatomu over the past few months in front of me. While hardly a scientific measurement of absolute popularity (science, schmience) it does make for pretty fascinating reading. And it gives some clue about how — if the desire took you — you might make your blog posts famous.

No surprises
Fifteen percent and 11% of pieces were about sex and religion, respectively, or both. That is both depressingly predictable and depressing in a lot of other ways. Not because I have a problem with sex, but I mean, gosh darn it and yippie-kai-yay and holy the same old shit batman, are people so starved for sex that the mere mention of it packs in the crowds? Still?

Post number six is called (simply) “My naked girlfriend”, with all the lusty, be-bosomed images that conjures up. At least 153 people (I say kindly, since “men” might be fairer) thought that was a worth a look. And based on the reports of the blogger behind this, his “server almost crashed” as a result of it. If you’re enthused by it still, don’t bother. He seems to have taken the photos down, or alternatively changed the post to be called “My naked ex-girlfriend”.

Scattered in and among the top posts is a whole bunch of stuff about Rabbi Lewis Furman, “the philandering Jew”. This combo of sex and religion is gangbuster stuff, and if we had to weight the stats differently, taking into account the number of appearances of a specific topic, this would take the proverbial matza.

Keeping it real
The next-best category is what I’ve called “news/media commentary”, and refers to any posts that tie back into news reports or highly reported news events. With 11% of hits falling into this, it’s a sure bet that riding on the popularity of big media events is a hit generator.

So, for example, if it snows in Jo’burg, posting pictures of it is a winner. Also the zulik Rabbi Furman above once again hit the jackpot: sex, religion and tying into mainstream media coverage.

Getting all minstrel
The combined categories of politics and activism rack up 17% together. I’ve separated them because politics tends to focus more on saying how bad the government is, and activism tries to rouse people to do something about it (during these two months, the issue at large was the Department of Minerals and Energy’s nuclear programme).

Again, no surprises here, although this category was pretty hit-and-miss, and the hits came quite low in the list. I guess politics can either excite people’s desire to go out and charge the Bastille or fall asleep.

Honourable mentions
Because I have lots of categories, the rest kind of flatten out to only a few entries each. But some are worth mentioning.

“Personal following” accounted for some traffic, but not a lot. It has to be said that people are more likely to visit these sites directly, so Amatomu is probably a bad counter for this category. However, the garish drivel hidden behind a few of the entries leading the unsuspecting visitor to a blog called Whispers in the Wind should carry some kind of warning.

I was also surprised by the prominence of local events and organisations. Bikers against Drugs, for example. And some incomprehensible, and perhaps encoded, entries from the South African Navy that weren’t even blog posts. And, I have to say, my friend Meira’s random post about how hard it was to get a Schengen visa.

Click image below for full results in a very, very ugly Excel graph 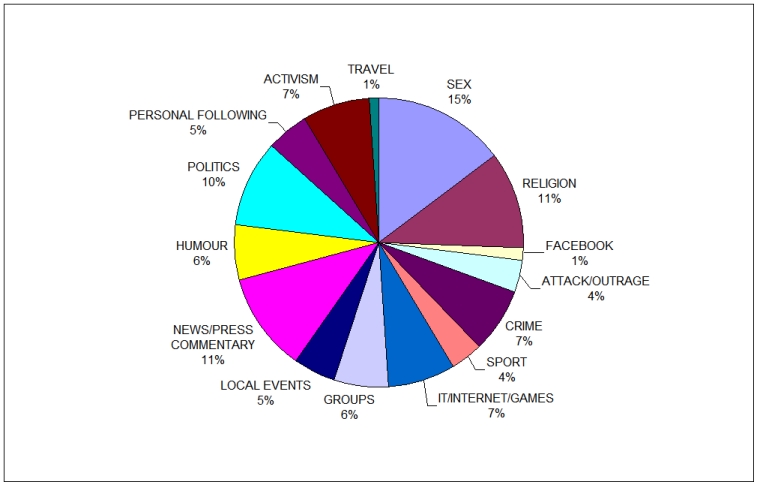 Conclusion
This post isn’t as funny as I thought it would be. Perhaps I should have named it “Naked chicks love Mormons, says Manto” if I wanted maximum exposure. It may be hard to concoct this kind of post on purpose. And maybe, one might say, why bother? Surely the purpose of a blog is not simply hits, but relevant hits, and perhaps generating comments and debate.

Still, if anyone thinks the blogosphere has changed anything about human communication and what makes us flock with each other, this goes a small way to showing how wrong you are.

No, I said FLOCK.

Methodology notes
When I say “most used links” what I mean (and what Vincent’s query delivers) is the blog posts that we clicked through to the most number of times from Amatomu. He will be the first to say that there are many different reasons why this could be the case, apart from raw appeal (such as appearing at the top of a particular filter list for a long time, as well as age of the post, although I tend to feel this can be largely disregarded as few old blog posts are of any interest).

The categories selected are arbitrary, and mine. And open to debate. If anyone is really interested, I’m happy to provide the spreadsheet, although I hardly think that an interesting discussion.

Remembering that I did not put each article into only one category, if I were forced to pick one for each some of the numbers would increase dramatically and some would disappear.

The popularity of specific blogs and bloggers can also not be known. For example, if I post a piece on sex versus if Vincent did, he’d most likely get more traffic simply because he comes with some built-in popularity.