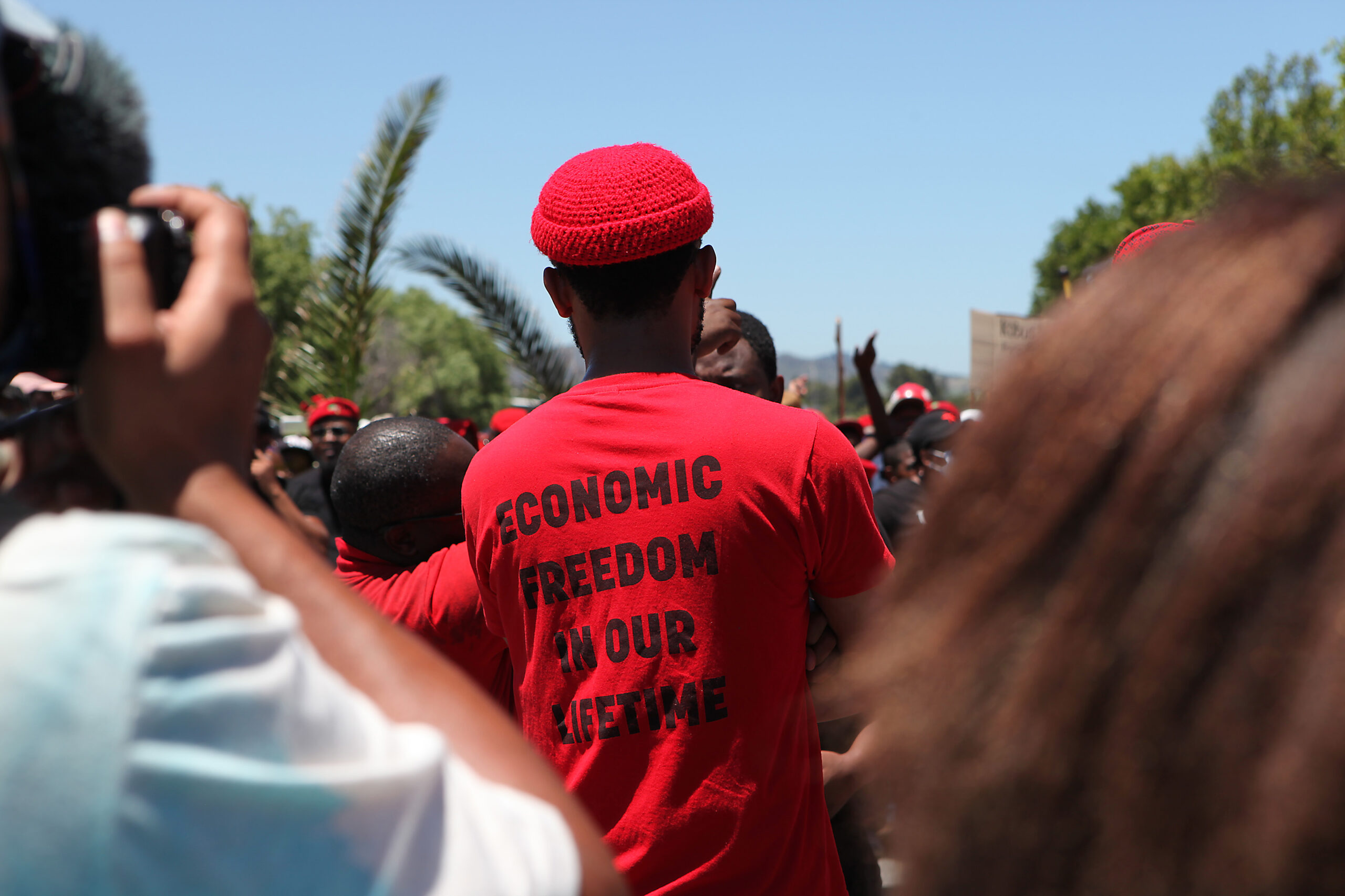 In the months leading up to the third EFF Students Command National Students’ Assembly (NSA), the commander in chief (CIC), and president of the Economic Freedom Fighters, Julius Malema reflected: “Do we need the EFF Student Command? Perhaps at the end of this address, we should answer this because I am going to argue that we do not need the student command at the December conference.”

It is tempting to read this statement from the leader literally. There were, in fact, many at the time who fell for the temptation to do so. Our role, as students of the vanguard movement, is to remove the veil and unpack the conceptual and ideological underpinnings of these remarks. It would be erroneous not to locate the frustration behind the president’s remarks, within the cardinal responsibilities and objectives of the EFF Students’ Command.

I say this because the EFFSC is a vehicle to achieve particular aims and objectives. Therefore, when meditating on its usefulness, or in the words of the president “need”, it must be judged against its success or lack thereof, in realising and achieving these aims and objectives.

From an ideological viewpoint

Perhaps, to contextualise this point, it may be useful to briefly explore the birth of Vanguardism as a political ideology and application. There are many similarities in Leninism and Marxism, however, when it came to the working class revolution, the two ideologues diverged. Marx held the view that the socialist revolution would happen spontaneously as a result of the people losing their patience with the vicious conditions of capitalism; that the capitalist mode of production, “sowed the seeds of its own destruction”.

For the purpose of this piece, it is enough to say that the vanguard is a group of class-conscious fighters, who have a deliberate strategy and revolutionary programme to organise and mobilise society, more specifically the working class, towards a socialist revolution. The role of the vanguard is to “consolidate the ground towards socialist power”.

Put differently, for Lenin, it was not enough to simply rely on the fact that people will ultimately get tired of the brutal and violent conditions of capitalism, and then overthrow it. To him, we simply do not have the luxury of time. We do not even know if it will ever come. Therefore, there must be a conscious and revolutionary sector of society, which will dedicate its time and efforts towards raising the consciousness of the people, so that they may not only get upset about their conditions, but also see the urgency and need to change them.

It is, therefore, on these ideological foundations that we must read the remarks of the Commander in Chief of the EFF. To ask the question: “How much progress has the EFF Students’ Command made towards realising its vanguard responsibility?” Lenin’s reply would be that we cannot wait for the unemployed youth of South Africa to rise up, of their own accord.

He would say that we cannot wait for the spontaneity of students who are refused access to education to rise up; for our brothers who are stuck in drug and gang-infested townships; for our sisters who live in constant fear because South Africa has made it impossible to be a woman and alive and safe; for learners who have to cross rivers to get to school, those who learn under trees and in damaged classrooms and all those who are victimised in racist schools because of their hair, language and looks. He would say to us that we cannot wait for unconscious people to wage a conscious struggle.

What are we doing to raise the consciousness of our generation, mobilise and organise them towards socialist power? The first principle of the seven non-negotiable founding principles of the EFFSC speaks to “mobilising students behind the struggle for economic freedom, embodied in the Founding Manifesto”. What is our qualitative and quantitative progress towards realising this very first principle and objective?

The EFF Students’ Command has been able to win and secure meaningful gains at a local campus level. There are many campuses that have now turned into EFFSC strongholds, and this wave is ongoing as we begin to take over campuses which were historically ANC bastions. Many students, at a campus level, sing praises of the work that the EFFSC has been able to do, be it through the SRC structures or EFFSC branches. Even with all this local success, however, there hasn’t been a nationally consolidated approach and programme which seeks to bring together all these different elements and package them as one solid and well-oiled programme of action — a national student vanguard approach.

Mobilising towards a solution

There are, of course, many different opinions about what may have led to this disjuncture and how it can be fixed. I want to focus on the second point, where one attempts to set up a foundation which will hopefully reinvigorate the space. I do not suggest that this is a wholesale and stubborn solution. I believe that there are many comrades, within our ranks, who can constructively disagree, edit and amend. That discourse is more than welcome. In fact, it is encouraged.

In line with our first founding principle, we have a responsibility to “mobilise students towards economic freedom.” True to the Leninist tradition of our movement which understands and appreciates the role of the state in crushing class antagonism in society, electoral politics are at the centre of taking state power. Though there remains a lot of room for growth and improvement, the EFF Students’ Command has shown great success in many institutions of higher learning when it comes to SRC elections.

This can be attributed to many different dynamics, both at the micro individual institution level, and the macro, namely, the popularity that the EFF enjoys among the youth. What is clear, though, is that the harmony between the EFFSC’s individual ability to organise and mobilise during SRC elections, and also the EFF popularity at a national level, has proven to be very effective.

Even with all the success in the tertiary sector, however, there remains a very high number of young people who have never registered, let alone voted in the national and local government elections. In the months preceding the 2019 national government elections the Independent Electoral Commission (IEC) revealed that the number of young people, aged 18 to 29, registered to vote had been at an all-time low in the past decade. The highlight being the ages 18 to 19, where the IEC saw a drop of over 50% from the 2014 numbers. The task of the EFF Students’ Command, as the closest and only nexus of the vanguard movement to youth, in the absence of the EFF Youth Command, is to convert its popularity in institutions of higher learning and reflect it in the national, provincial and local voters’ roll.

Trends can already be seen in voting districts which are near tertiary institutions. In these districts, members of the EFFSC do not only mobilise, but also stand as observers and or party agents, to count and protect the votes of the EFF. This is an indication that the EFFSC has the necessary stamina to, “mobilise students behind the struggle for economic freedom, embodied in the Founding Manifesto”. What is needed is the central coordination, organisation and edification of this stamina which can be achieved through an elections desk.

Of course, the constitution and nitty-gritties of the desk can be discussed later, but it is paramount that the composition ensures that all provinces are well represented to ensure greater coordination and organisation.

As a programme of action, the desk must organise targeted programmes directed at increasing voter registration among young people. Programmes including, but not limited to, door to door, mini rallies, marches, pickets, pamphleteering, parties, events and any other innovative means of galvanising young people towards government elections. The desk must keep a record of all young people it engages with. The motherbody bus list approach can be used as a blueprint. The desk must also set clear targets, track and report on its progress.

When all is said and done, and the question of whether we need the EFF Students’ Command arises, we will be able to not only provide qualitative reasons, but also quantitative reasons, as we will be tracking how much the student vanguard is contributing to the electoral growth of the party.