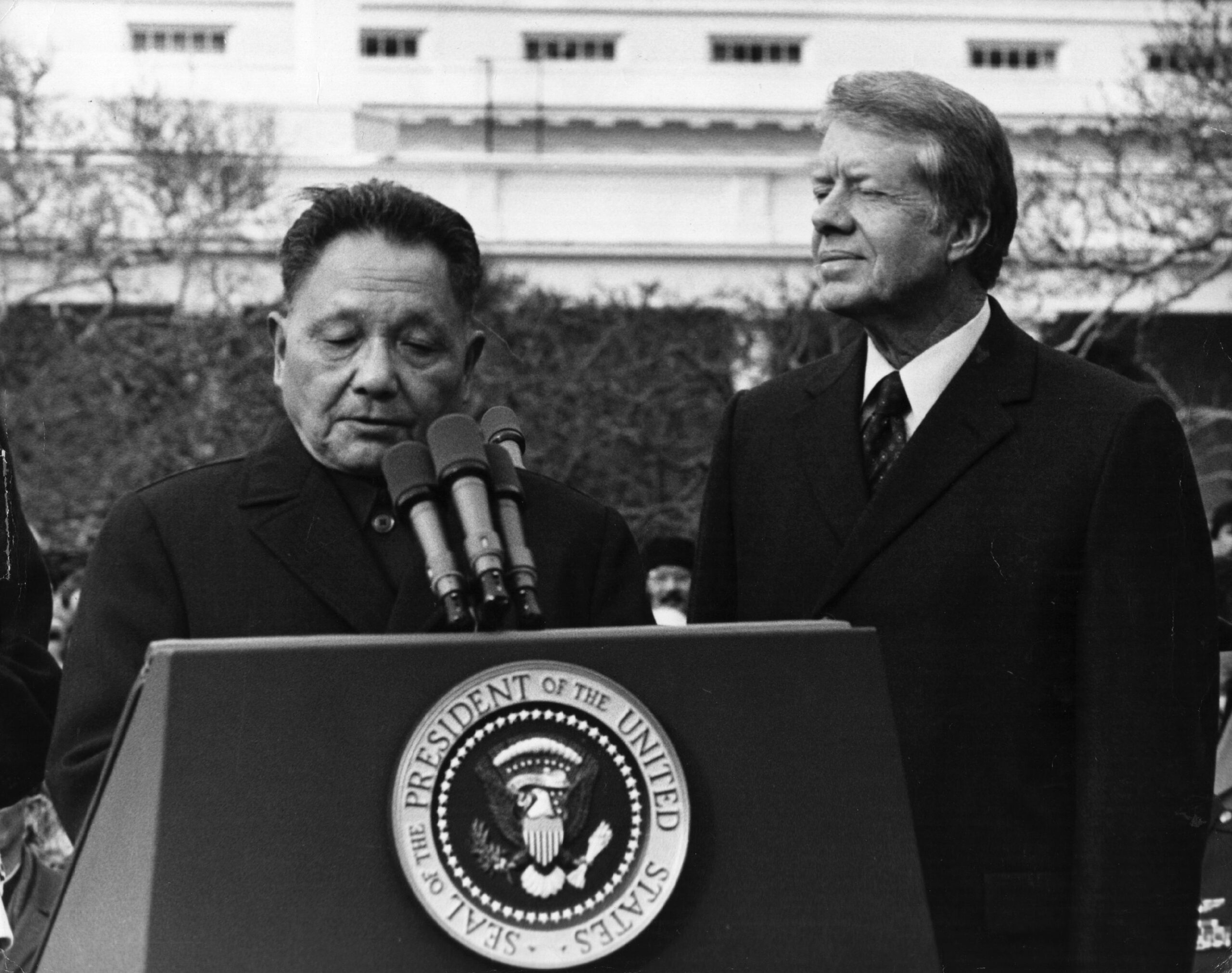 “Socialism is not poverty!” These were the words famously exclaimed by Deng Xiaoping (Mao Zedong’s successor) on a state visit to Japan in 1978 when he observed the enormous industrialisation the country was undergoing at the time. This was after the tumultuous Mao years and when China was still very poor.

In their book, Wealth and Power: China’s Long March to the Twenty-first Century (2013), Orville Schell and John Delury from the Center on US-China Relations at the Asia Society in New York City, make the plausible argument that China’s 20th century began in 1839 with the onset of the First Opium War since the central themes of that century continue. These themes are China’s humiliation at the hands of foreign powers which fed into Marxism, industrialisation and striving for wealth and power to regain their former great power-status, among others.

While buying tea, porcelain and silk from China, the British Empire thought it a good idea to improve its balance of payments with China by insisting (with violence if need be) that the Chinese buy opium from the English which was imported from India and Afghanistan (British possessions at the time). The humiliating conclusion of the First Opium War came about in 1842, with the signing of the Treaty of Nanjing aboard a British warship. One of the stipulations of the truce was that the Qing Empire was forced to cede Hong Kong to the British.

This signalled the beginning of China’s oft-cited “hundred years of humiliation” (1842-1949) at the hands of, mostly Western, imperial powers — but also of Japanese aggression in the late 19th and early 20th centuries — and also provided the impetus for a reinvented Chinese reality to regain the greatness of the Chinese empire, which predated the arrival of the West.

The People’s Republic’s “impressive run of hyperdevelopment and wealth creation” since 1978 is a single-minded pursuit of national greatness by way of fuqiang, “wealth and power”. The notion of fuqiang is key to understanding the contemporary Chinese mindset. The historian Xiao Gongqin argues that extreme Chinese nationalism and overblown rhetoric have distorted perceptions of political reality.

This is, in part, as a result of China flexing its military muscle against Japan over control or possession of the Diaoyu/Senkaku Islands in September 2012 and the more recent border clashes with India. Taiwan is still considered a province of the People’s Republic of China. With its imperialist mindset, China’s 20th century is, therefore, ongoing, deep into the West’s 21st century.

According to Singaporean diplomat Kishore Mahbubani, the “Chinese Dream” is simply a great urgency on the part of the Chinese to avoid future humiliation for the country. From the Chinese perspective, only a strong and wealthy China, respected as a regional (and, possibly, global) hegemon can avoid racist and supercilious slurs. Geremie R Barmé, an Australian sinologist based in New Zealand, suggests that we should understand the Sinophone world to include the evolution of Chinese languages, cultures and diaspora communities around the globe. China’s long march to wealth and power (consider the show of conspicuous consumption by Chinese tourists in the West) or what Richard McGregor calls “a renewed Sinocentric order in Asia”, are the essential ingredients of the Chinese Dream.

With the People’s Republic still overtly a socialist society (albeit a post-communist, hyper-consumerist one) when the communist experiment has ended in tears in so many countries in Eastern Europe and elsewhere, the Chinese reverence for the wisdom of the past will ensure that its Marxist leanings keep it firmly in the 20th century. This unapologetic resurgence of capitalism within a Marxist framework is known as “socialism with Chinese characteristics”.

Despite the enthusiastic celebration of Karl Marx’s 200th birthday in China in 2018, the largely successful, if uncomfortable, marriage between capitalism and communism that the Chinese have managed to achieve, would have Marx turn in his grave.

The uncanny resurgence of capital in China illustrates the point I am driving at, which is that the United States, under a number of successive administrations, including those of both Barack Obama and Donald Trump, has lost the plot. With globalisation making the world much smaller, it is no exaggeration to claim that the US’s hegemony is increasingly being contested in a multi-polarised world with concerns and priorities very different to those of a Western agenda.

Since 1978, the People’s Republic has, in the short space of four decades, experienced the greatest industrial revolution in the history of human civilisation, as Niall Ferguson, professor of international history at Stanford University, famously argues. Xi Jinping, China’s current leader, has thrown his weight behind this economic trajectory for “a new era” (in classical Marxist terminology).

It has been projected that China, even if understood as a post-communist society, is likely to overtake the US as the biggest economy at some point between now and 2025. By 2050, the country is predicted to have an economy twice the size of the US economy; India could have one on a par with that of the US. By mid-century, five of the biggest economies on the globe will be in the East. According to Graham Allison (based at the Belfor Centre at Harvard), China’s economy is already on a par with the US and by 2025 the Chinese economy will be 40% bigger than that of the US.

It is within this context that the implications of China’s ongoing 20th century for Africa should be considered. According to The New York Times, the Chinese economy has emerged triumphantly from the Covid-19 pandemic and is growing faster than it did at the same time last year, before the worldwide shutdown, while other countries are still dealing with second-wave infections and their economies are struggling. As an insatiable industrial monster, China’s enormous need for raw materials will focus its attention on exploring opportunities in the developing world, particularly in Africa with its abundant natural resources.

Whereas many in the West are talking post-development (notably in view of the alarming warming of the planet as a result of greenhouse gasses), China is still caught up in a time warp of the 20th century for political and economic reasons. In view of the central positioning of the “China Dream” (the enduring striving for wealth and power, noted above) in the Chinese psyche, there is no reasonable prospect of the country’s economy slowing down out of concern for global warming. With its emission of greenhouse gasses, China is certainly the biggest polluter in the world, followed by the US.

Unlike most Western development aid or straight financial loans to African governments, China shrewdly attaches no transparency and/or human rights barometers to its acceptance criteria. Clearly these parameters considerably sweeten Chinese offers over that of “imperialist” Western agendas. The Chinese are fond of claiming that their dealings with the Global South are devoid of colonial baggage, which is only partially true.

Martin Jacques, the author of the best-selling When China Rules the World (second edition, 2012), argues that with the tremendous rise of the East at the expense of the West during the (Western) 21st century, the West’s great hope is that its values and priorities will be attractive to the Chinese. They have no intention, however, to assimilate Western values or priorities.

For example, while the Trump administration claims to be offended by Chinese retaliation during the recent trade war, a nuanced view of the US’s place in an increasingly post-American world puts a different gloss on the picture. China holds no less than $1.2-trillion in federal US bonds, which effectively makes it not only the US’s biggest creditor, but also its greatest benefactor: a financial life-line. Curiously, this illustrates more than any other example how the Chinese generosity of spirit is an inviting hand of friendship extended to its trading partner across the Pacific Ocean.

It is with these considerations in mind that Ferguson makes the suggestion in his documentary China: Triumph or Turmoil? (2012) that within the foreseeable future, innovations (as a rule) will be made in China while assembling would be done in California — which is the reverse of the current position.

In the long term, the global parameters have also changed significantly from those in the 20th century (when a lone superpower settled disputes with military might) to those which dictate the geopolitics of the 21st century, with a multi-polarized world drawn along new lines, still to be negotiated.

So far, I have spoken about the US-China relationship in purely economic terms but, of course, the dynamic cannot be viewed in merely these terms. According to Allison, “It was the rise of Athens and the fear this instilled in Sparta that made war inevitable”, a reference to the Peloponnesian War between the Greek states of old.

In his book, Destined for War: Can the US and China avoid War? (2017), Allison argues that the lessons of history over the past half a millennium suggest that war is inevitable in the vast majority of cases “when a rising power threatens a ruling power”. His Thucydides trap case file refers to the principle that it is dangerous to build an empire (as the Chinese seem to be doing), but even more dangerous to let it go (which seems to be the fate of an imploding US empire).

Peter Nolan, Chong Hua Professor of Chinese Development at the University of Cambridge, suggests in his lecture given in Vienna in 2016, that Chinese leaders are very aware of the dangers of another Peloponnesian War and they are adamant that a Thucydides trap must be avoided at all costs.

The Peloponnesian War (431–404 BCE) was fought by the Delian League led by Athens against the Peloponnesian League represented by Sparta in ancient Greece. John Mearsheimer, a China expert based at the University of Chicago, is of the view that once the greater China “becomes” a gigantic Hong Kong (meaning as rich and as prosperous as Hong Kong is), it will be impossible to reason with the country (since appeals to fairness and reason are reserved for weaker negotiators).

The US and its allies already have measures in place to contain China. Japan and India, countries very different from each other, are US allies in Asia. Together with Taiwan, South Korea, India and the Philippines, the US has already drawn a steel grip around the PRC as the two behemoths (the US and China) exist simultaneously in different centuries.

The “century” concept rarely breaks down in Western accounts of historical events. But in dealing with China, we are engaged with a very different and altogether foreign “Other”. China’s long and continuing 20th century should give us pause and reason to reconsider counter-narratives, such as its own, creating a more nuanced image of the dominant neocolonial narrative so arrogantly peddled by the US.

In time to come, Deng’s prophetic words might apply in reverse to the US when Western-style capitalism (highlighted by Trump’s war cry “America first”, trade tariffs, anti-immigration and governance by force) might become a euphemism for poverty.