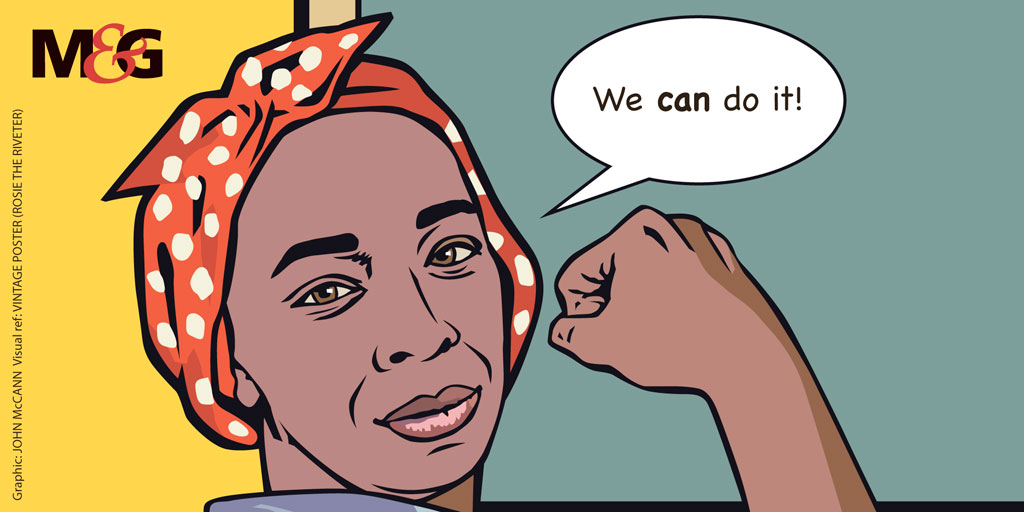 By Thought Leader Editor on 8 August 2020

When capitalism is in crisis, it turns on women, people of colour, LGBTI++ groups and other minorities. We have seen this throughout history. When World War I and II ended globally, economies were in tatters and capitalism had to repress women to regain its edge. Soldiers returned home to find women doing “men’s work” and were hit by the realisation that they were no longer able to provide for their families in the way that society expected them to.

This created what bell hooks refers to as a crisis of patriarchal masculinity. Men were suddenly confused about their role in the family and society, because the meaning they attached to being men as “providers” or “head of the home” no longer applied to them. This confusion and frustration was taken out on women, both at home and in the workplace. Men were able to re-enter the workplace. Despite paying women less; many employers still preferred to hire men and women lost their jobs to make room for them. As countries started to rebuild after both wars, women were told that their main role was in the home raising the children, whereas men grew the economy.

The same is true for South Africa. At the end of apartheid, the economy was in ruins because of sanctions and because apartheid criminals emptied state coffers before fleeing the country. Apartheid had been ruthless to black men — many activists and anti-apartheid leaders were either dead, exiled or in jail. A lot of the late apartheid liberation work was carried out by women and the youth. Just as women in Europe and the United States were pushed aside after the wars, women in South Africa had to take a back seat to allow men to take the lead in growing a struggling economy.

Women are the most vulnerable

The current global lockdown caused by the coronavirus outbreak is arguably the biggest threat to capitalism in our lifetime. The system is struggling because its core tenets have always been about profit and enriching white, patriarchal monopoly capital, not social well-being. Many jobs have been lost and the rates of infections are staggering; we are playing a juggling act between human lives and the economy. Once again, women are the most vulnerable at this time because they occupy the most unskilled jobs and face the greatest risk when it comes to job or income loss. Cases of gender-based violence are also spiking, with Eyewitness News reporting an increase in cases of domestic violence on the national hotline in the first three weeks of lockdown. More than 120 000 people called the hotline, which is double the usual volume.

What are we celebrating?

On Women’s Day we need to ask ourselves what we are celebrating when this failing economic system has shown time and time again that women are not considered valuable. Of course marking the day and month is important, because it is symbolic of the role women played in the fight for freedom. Women such as Winnie Madikizela-Mandela, Lillian Ngoyi, Helen Suzman, Albertina Sisulu and countless others worked hard to ensure that women have better representation and this should be celebrated. A deeper look into Women’s Day, however, begs for reflection.

In simple terms, what is worth celebrating? The obvious answer would be that women are free from the political bondage that was apartheid, that women in general – and black women in particular — have fewer structural impediments to entering and progressing in business and at work, and that to some extent, women no longer have to enter the institution of marriage and bear children in order to be significant — at least in theory. But on the flip side, men are at war with women; even when women are able to overcome the historical and structural oppression and make it into workplaces, they still have to deal with sexual harassment. They face similar oppression in their communities and homes.

Capitalism needs to be challenged

The deaths of Tshegofatso Pule, Naledi Phangindawo, and many other women during the lockdown have led to renewed calls for greater protection for women and harsher punishments for men who abuse them. These calls are important and have created more awareness about the oppression of women. The discussion, however, needs to include the markets and not just individuals and state or legal structures. The #BlackLivesMatter dialogue has recently taken a similar shift. The BLM movement criticised corporate Americans for engaging in brand activism while failing to show support in hiring practices, highlighting that less than 1% of Fortune 500 chief executives are black.

The oppression and violence that people of colour and women face, were created by the capitalist system through slavery, colonialism and apartheid. Capitalism never intended for women to ever benefit from the system; so, when we address the violence that women are suffering from partners who are experiencing a crisis of patriarchal masculinity, repressive workplaces, communities or churches, we have to challenge capitalism too. This system affects every aspect of our lives, even in ways we do not realise. Employers still prefer to hire men over women, women are paid less, and there are fewer female executives; women still occupy most of the lowest paid, unskilled jobs.

A study done by Jacqueline Mosomi found that women in the middle of the earning spectrum earn up to 35% less than men in South Africa. We know that women are less likely to stay in abusive or transactional relationships if they are financially independent; equal access to opportunities would see a lot more women empowered enough to protect themselves against violence. We still celebrate and get excited when big corporations announce “first black female” top executives, and of course we should celebrate women’s achievements. But a certain level of outrage should be directed towards these companies for not being inclusive sooner.

One of the oldest perspectives in sociology is the conflict perspective. It points out that part of the explanation for the plight of women is the division of males and females into producers and reproducers, respectively. Producers must work for their families to have access to food, clothes and shelter, whereas reproducers have to bear children and care for them.

Societies by and large seem to believe that the success of the family, business, politics and communities rests upon both males and females respecting this division. This arbitrary and often impractical demarcation has been debunked by feminist theorists such as Judith Butler. Butler reminds us that these divisions of labour are socially constructed, they are not based on any absolute facts and they can be changed, dismantled and reconstructed in different ways. The view of women as reproducers and nurturers, however, has persisted even in the workplace, where male executives and managers far outnumber their female counterparts. With this in mind, as well as the heartless killing of women by men in different contexts, one would be forced to ask once again — are women really free? Can women “fit” into a failing capitalist system that has never intended for them to be active members?

What should we be reflecting on this Women’s Day?