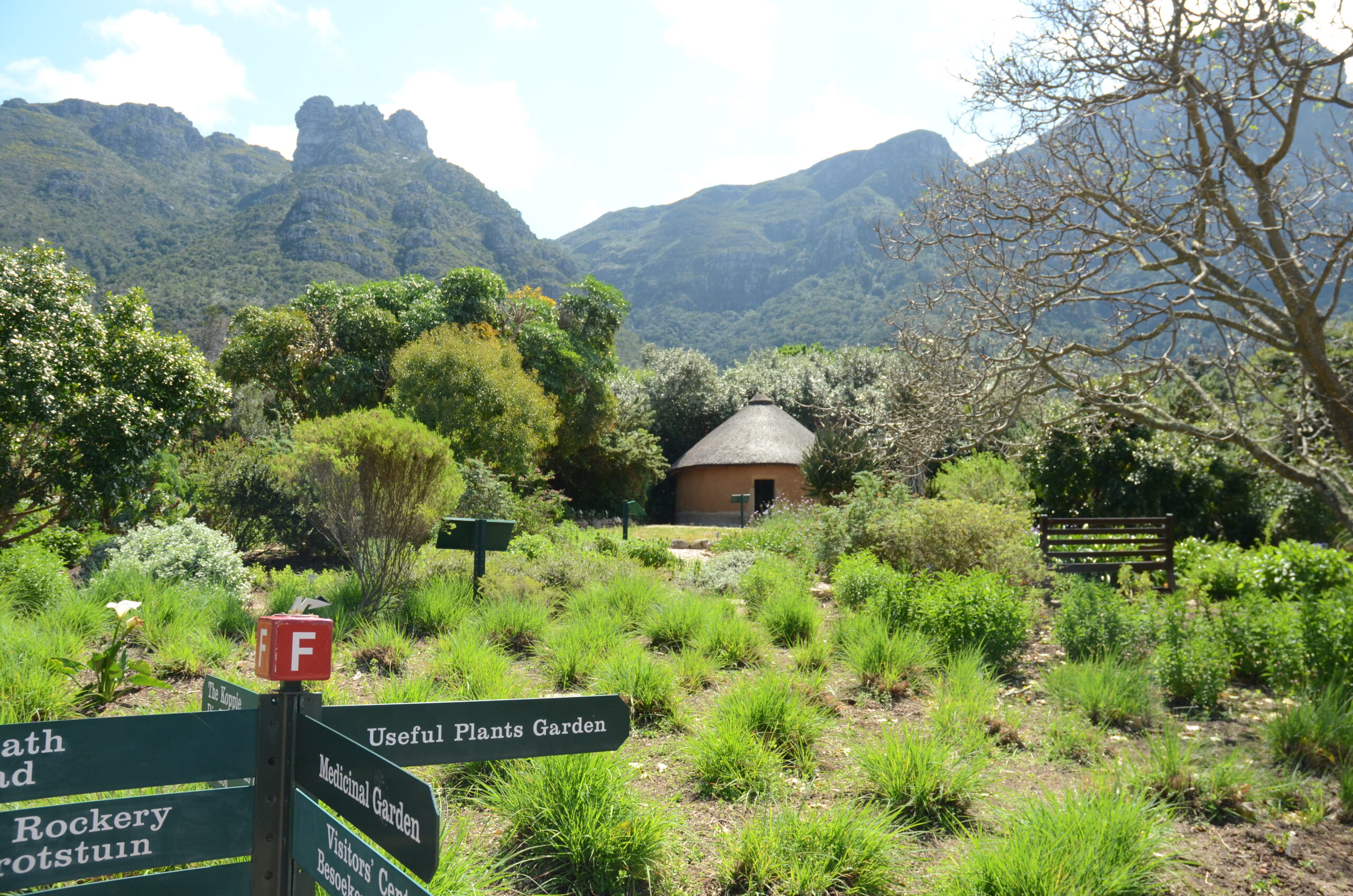 Unfamiliar scenes unfolded at the Kirstenbosch National Botanical Garden after it closed its doors to the public at the start of the Covid-19 lockdown in March: biodiversity thrived. The number of snakes, such as puff adders, spotted eagle owls and other birds multiplied. Cape grey mongoose roamed freely, and even two caracals were spotted more often. The only humans able to enjoy this abundance of wildlife were the few Kirstenbosch employees who live on the estate and kept the garden running. For most Capetonians, the lockdown experience was bleaker, as they had little or no access to green space.

The pandemic highlighted the necessity for botanical gardens to change so that they help meet people’s needs that include green spaces for physical and mental wellbeing, food, medicine, plants for cultural practices, as well as biodiversity conservation as a response to climate change and habitat destruction.

When Kirstenbosch was established in 1913, it was envisioned as a site of leisure and education for white people. In the discussions about choosing a site for the botanical garden, proximity to white neighbourhoods was listed among the selection criteria. Black people were not imagined as the garden’s public, but as its labourers. That Kirstenbosch was understood as an exclusive white space becomes particularly obvious on the maps that depicted the botanical garden. Whereas they mentioned suburbs inhabited by white residents, they mostly failed to mention Protea Village, the area adjacent to Kirstenbosch where black people, many of whom are descendants of the enslaved people who once worked the land, lived until they were forcibly removed under the Group Areas Act in the 1950s and 1960s.

Black people were allowed to visit Kirstenbosch throughout the apartheid era, but they were not served in the whites-only tea house. Black visitors were and still are a minority. Reasons for this are that apartheid spatial planning forced them to live far from Kirstenbosch, suitable public transport is limited and entrance fees are high.

This situation is not unique to South Africa; in many other places botanical gardens and public parks were initially intended for the wealthy elites. To make urban green spaces accessible and inclusive, bridges need to be built — sometimes literal bridges over highways that segregate poor neighbourhoods from public green spaces, at other times bridges in the form of public transport. New strategies for entrance fees are also needed.

Kirstenbosch and the other national botanical gardens managed by the South African National Biodiversity Institute, were opened to visitors in August when the Covid-19 lockdown regulations were eased, but many working class and poor people will continue to be excluded from them, primarily because of unaffordable entrance fees, geographical distance and cultural alienation.

With R75 per adult, tickets to Kirstenbosch are too expensive for most locals. An alternative idea would be a fee system that charges visitors relatively to their income. For institutions like Kirstenbosch, which depend on fee-paying tourists, the Covid-19 pandemic further poses the question whether income generation through entrance fees is sustainable, or an entirely different funding model is needed.

Besides providing green space to urban residents, the Covid-19 pandemic has highlighted a number of other areas in which botanical gardens can play a crucial role. One of them is biodiversity conservation. Covid-19 is a zoonotic disease; it is caused by pathogens in animals that are transmitted to humans. Zoonotic diseases have been on the rise in the past few decades.

Anthropologist Thom van Dooren reminds us in a recent article in New Matilda that despite its supposed origin in animals, the real source of the Covid-19 pandemic is human. Studies show that habitat loss, intensified farming practices, climate change and markets for bushmeat increase spillovers of viruses such SARS-CoV-2 — which causes the Covid-19 disease — from animals to humans. Van Dooren points out that “many of the same processes that are giving rise to new zoonotic infectious diseases are also at the centre of our global biodiversity crisis”.

Botanical gardens have also begun to contribute to research on climate change, for example through long-term studies with plant genetic material that is preserved in herbarium collections. Given the urgency of the climate crisis, this research needs to be treated as a priority.

It is crucial to connect biodiversity conservation and research to the social and political issues at stake. Even though botanical gardens are perceived as apolitical spaces, they have never existed outside of politics. In South Africa, they evolved in imperial, colonial and apartheid histories. Rather than shying away from politics and styling themselves as supposedly apolitical nature theme parks, as has been the trend in the past two decades, botanical gardens need to participate in action for environmental and social justice.

Another area in which botanical gardens can play a more active role is improving food systems. The Covid-19 pandemic has highlighted several emergencies with today’s food systems.

First, with the moving back and forth of viruses between humans and animals considered as a possible route for viruses that cause zoonotic diseases to evolve, there is a need to reconsider the organisation of meat production.

Second, several health-conditions such as diabetes and obesity, which are considered risk factors for Covid-19 patients to develop severe reactions to the infection, are directly related to diet. This is a consequence of policies that have replaced century-old indigenous crops and modes of production with industrialised and imported foods of low nutritional value.

Third, with unemployment and poverty rising as a consequence of the economic effects of Covid-19, food security, which for many was already precarious, has become a problem.

To contribute to improving food security, botanical gardens can build on their past activities. In the postapartheid era, Kirstenbosch added several new display sections with the aim to address its colonial and apartheid histories of catering to an exclusively white public and become more inclusive. Probably the most important intervention was the opening of the Useful Plants Garden that displays a collection of plants used by indigenous groups for food, medicine, crafts, as building material and in spiritual realms.

Botanical gardens’ plant collections can serve as a starting point for sharing plant material, knowledge and skills with individuals and groups who are keen to start their own gardens or farms. They can also serve as a starting point for research into further developing indigenous plants as sustainable foods or medicines. Another idea could be to add productive sections to botanical gardens in which urban residents can grow and harvest their own food.

All the aspects that the pandemic has highlighted point to the need to reimagine botanical gardens. Rather than aspiring to international standards, botanical gardens need to be redefined in local contexts and according to what people who live around them want them to be. The colonialists and imperialists who established them had their own trajectories, and it is time to reconsider what should be let go off of the older models of botanical gardens, what should be kept, and what should be further developed and added.

One way to do this is to identify local needs and react to them. For example, in a number of cultures in Southern Africa, plants such as impepho (Everlasting, Helichrysum odoratissimum) are used as incense for spiritual connection, and plants such as umlahlankosi (Buffalo thorn tree, Ziziphus mucronata) are used to perform rituals at death.

Through a strategic sustainable biodiversity programme that involves skill development in growing indigenous useful plants, botanical gardens could make these plants available in a way that takes pressure off plants that otherwise might be collected in the wild, while also making botanical gardens more relevant to people who previously had few connections to them.

For the process of re-defining botanical gardens, plants can act as guides, as they teach us that they grow in very specific contexts, with specific needs and their bodily form reflects their environment. Like the plants that grow in them, botanical gardens themselves need to be rooted in place if they are to thrive and flourish.

Melanie Boehi is visiting researcher at the Wits Institute for Social and Economic Research, Dr Luciano Concheiro San Vicente is a historian from Mexico City and Phakamani m’Afrika Xaba is a senior horticulturist and researcher at the Kirstenbosch National Botanical Garden and co-authored Traditionally Useful Plants of Africa: Their Cultivation and Use.

They write in their personal capacities and their opinions are not those of their employers or institutions.