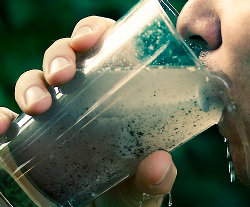 “I can categorically say that we are not facing a water crisis, or a water-contamination crisis,” Lindiwe Hendricks, the Minister of Water Affairs and Forestry, told a media briefing in Parliament last week. “The water that comes out of our taps is among the best in the world.”

That may well be true. But who can believe her? After all, we weren’t facing an electricity crisis either, remember? Our own president told us so.

Steven Lang wrote in a damning report in October 2007 for Inter Press Service that:

Sewage plants in South Africa’s northern Gauteng province poured millions of litres of untreated waste into three rivers between the capital, Pretoria, and the commercial centre of Johannesburg earlier this month. National power utility Eskom cut electricity to the treatment plants, which were then unable to process the waste water before it was released into the rivers. […]

The Department of Water Affairs and Forestry’s Themba Khumalo attempted to downplay the gravity of the spillage [of 200-million litres of untreated sewerage from eight treatment plants into the Apies, Hennops and Pienaars rivers, which flow into the Hartebeespoort Dam]: “It is a catastrophe, but certainly not a national crisis.”

He went on to place the responsibility for averting similar crises on the shoulders of individual municipalities, saying they should negotiate directly with Eskom and tell the power utility which sanitation works should not be included in power cuts.

Ah, so it’s not a national crisis because you can shift the blame to local municipalities? Good to know.

Such problems aren’t isolated, however. In Cape Town, last month, raw sewerage overflowed into the Milnerton lagoon when the Koeberg sewerage pump was shut down. A similar thing happened near Simon’s Town. Cape Town reports having 30-odd generators, half of them fixed, to keep 395 sewerage pumps going.

According to minutes of a January 2008 meeting of the Blesbokspruit Catchment Forum, in the Vaal catchment area (PDF):

Eskom load-shedding had stalled all instrument analysis causing damage and work had to be outsourced. Erlab [the East Rand Water Care Company Laboratory] will resolve this problem as analysie [sic] for some of the important sewage works will not be done. […]

[The forum] noted again that the pump stations in the Ekurhuleni region are of major concern particularly with regards to the latest problems of load-shedding caused by Eskom. […]

All members present at the meeting agreed that the continued practice of load-shedding will have a serious and significant impact on waste-water treatments not being able to operate and meet discharge requirements.”

Ja, people, but only in the Vaal Dam, not nationally!

The problem is also not new. After the 2006 power failures, Cape Town was warned that sewerage was being pumped into the sea.

Derek Bock, chief operations officer for the Central City Improvement District, said the CCID had warned the city eight months ago that the sewage pumps were inadequate and contingency plans for such emergencies as the power cuts were unsatisfactory.

Not only is problem not new, it is also not superficial. The cause goes deeper than recent blackouts that caused sewerage spills or industrial contaminants in source water. Almost a decade ago, this article by Peter Wellman for the African Eye News Service documented problems with water reticulation and drinking water delivery problems, and a note was added:

It is clear that all is not well in the water supply and sanitation sector in South Africa.

A great deal was sacrificed in the interests of accelerated delivery, mainly in the form of community engagement, consumer education and a disregard for the hard-learned lessons of development from around the world.

The article particularly quotes the Director General, Mr Mike Muller, as effectively blaming the communities and consumers for the failure. However, sustainable services have not been delivered, whether the cause of failure is technical, social or financial. It is not as though these issues are new or a surprise in the South African situation. It is not as though the circumstances leading up to the failure have not been highlighted on dozens of occasions over the past few years. What is surprising is that all the warnings were not heeded.

It is a double irony and extremely cynical to blame the people for the failure.

The Mail & Guardian article, in which Minister Hendricks says “there is no crisis”, continues:

She also admitted that there has been a problem with ageing infrastructure, because no provision was made in the past for upgrading infrastructure. “Repair and refurbishment haven’t kept up,” she said.

As a result, some dams and rivers have been polluted where informal settlements have grown up on their banks. This too is being dealt with, she said, “but infrastructure construction takes time”.

What? No provision was made for upgrading infrastructure? One can safely assume, then, that water reticulation is both over-stressed and under-maintained.

I’ve lived most of my adult life in the north and north-west of Johannesburg. In just the past decade, entire landscapes have been turned into fields of ticky tacky houses stretching to the horizon. Thirty years ago, Midrand and Centurion didn’t exist, and the road between Johannesburg and Pretoria was 70km of … well, there was the Snake Park. Twenty years ago, they put up stop signs at an intersection in the back of beyond and called it Fourways. There was nothing but dark, two-lane blacktop north of Corlett Drive on the M1.

Ten years ago, a trip to the Walter Sisulu Botanical Gardens was a trip to the country, and driving to Kromdraai was to venture into the deep hinterland. Not so long ago, Diepsloot was little more than a small rural settlement for a few thousand families. Several hundred thousand people now live there, many moved there by the government from Alexandra township near Sandton. Roodepoort’s population grew by 50% in the past decade.

Given all this helter-skelter development, why on God’s green earth was no provision made in the past for upgrading infrastructure? True, many of the early residents of these areas are snooty mink-and-manure types, but do they not shit?

It’s not even like the municipalities had to single-handedly keep up with rampant growth and development despite stretched budgets and capacity. They didn’t have to do it all themselves. Much of the development is newly built, sold to middle- and upper-class residents. Surely a prescient city planner somewhere could have required that developers upgrade electricity, roads, sewerage and water reticulation plant before issuing planning permission? The municipalities themselves could then focus just on urban renewal, township rehabilitation and upgrading, idealistic public transport development, and pipe dreams of mixed-income integrated housing developments.

Our tap water appears to be largely OK, for now. But there’s only so much that Rand Water and its equivalents elsewhere can do in the face of ageing infrastructure that has not been upgraded to keep up with development, and decaying power infrastructure that interrupts critical pumping and treatment facilities. This adds up to only one conclusion: buy shares in companies that make polyethylene terephthalate. That’s what water bottles are made from, and we’ll need at least 400-million of those for the 2010 World Cup.