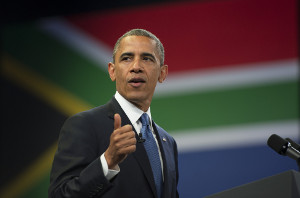 Walk the talk, Obama: Help Africa get a permanent seat on the UN Security Council

I am currently in the United States as a 2016 Mandela Washington Fellow; President Obama’s initiative for emerging young African leaders. I have spent six weeks at Virginia Commonwealth University; learning and gaining valuable skills and I am excited to return to South Africa even more determined and inspired.

We are currently in Washington and this week Wednesday, over 900 groundbreaking young leaders from the continent including myself will participate in a town hall event with President Obama. I do not take the opportunity I have had to participate in this fellowship lightly and as it comes to an end, I have been reflecting on how I can use this experience to take my country forward. Indeed I have gained personally and professionally but I and others need to challenge ourselves to using our new found positions for purposes bigger than ourselves. For me, the Summit will only be the beginning of this. As I commit myself to a life of public service, I will use this platform to challenge the President and the United States government to take certain steps to walk with us as we work to realise a better Africa. I would like to share one such step with you.

During the Summit with Fellows from the 2015 stream, a young leader from Cameroon asked Obama if he supports Africa’s position to have a permanent seat on the UN Security Council. In his response, he provided a brief history of the foundations of the Security Council and concluded by saying that in principle, he believes there should be representatives on the Security Council from Africa and other regions of the world. Since then, there has been no progress on the matter despite some brave efforts, including from our own President Jacob Zuma, who made the case for the importance of granting Africa a permanent seat during the 70th Anniversary of the United Nations General Assembly last year. He said, “The UN cannot pretend that the world has not changed since 1945. We are no longer colonies. We are free, independent sovereign states.”

When he launched the Young African Leaders Initiative (YALI), Obama said he envisions a continent where a new breed of young people would help move Africa forward. He has dared us to be brave, bold and visionary. He has dared us to be the Nelson Rolihlahla Mandela of our generation. At the Summit and beyond, I will respectfully challenge him to do the same. On behalf of the 1 billion people in Africa, I will invite him to join Africa in this struggle and help us to attain a permanent seat on the UN Security Council. I will invite him to finally walk the talk on this matter.

While member states may participate in discussions in the Security Council, this means nothing when we cannot vote on these issues; something a permanent seat would give us the power to do. The time has come to put an end to treating Africans as second class citizens and we need to turn the page on this historic injustice. If Obama is committed to his own objectives, he must recognise this.

I want to make it clear that we will no longer tolerate a world that takes decisions about us, without us. We demand a seat at the world’s biggest decision-making table. Africa is no longer the ‘Dark Continent’ and we do not want to be perpetual victims of history; we want to be agents of our own change.

I was extremely disappointed last year when Samantha Powers, the United States Ambassador to the United Nations, said that the United States is opposed to any expansion of the veto power. As an African, I felt silenced by this. I felt oppressed.

When we make the call for a permanent seat for Africa, a legitimate question arises about why this shouldn’t be extended to other regions particularly in Asia, South America and in even in some parts of Europe who do not feel represented by the United Kingdom and France. I suspect the vote by Britain to leave the European Union will fuel such sentiments.

These are difficult questions, but I want to believe Obama is equal to the task. In March 2005, an Extraordinary Session of the Executive Council of the African Union took a position on reforms to the United Nations by calling for a more representative Security Council. This agreement is known as the Ezulwini Consensus and amongst the recommended reforms, the Session resolved that Africa should have at least two permanent seats (with veto power) and five non-permanent seats on the Security Council.

This was later followed by the Sirte Declaration in July 2005 which resolved on two permanent and two non-permanent seats for Africa.

I know these are ambitious targets but all I request is for Obama to meet us half way. I am not blind to the fact that achieving the goals set out in the Consensus and the Declaration will be an uphill climb; it has been 11 years since these were adopted and none of the proposed reforms have come to fruition.

Perhaps what we need to do is to take things one step at a time. What Africa needs is a seat at the table – as an equal and not as a guest. Once this is achieved, we can then move on to the next set of reforms. Change, as Obama knows, happens gradually. We will face resistance along the way, even from our friends. But like Mandela, we must never give up. We should never fear change, we should embrace it.

I believe Africa should have a seat on the Council not simply for the sake of fair representation, but because we have much to offer the world too. When it comes to the key mandates of the UN – peace and security as well as advancing human rights – Africa is already leading the way. As the world grapples with conflict, South Africa was the first to voluntarily give up nuclear weapons. Giving up nuclear weapons is a sign of strength, not weakness. I completely subscribe to Sir Winston Churchill’s idea that “talking is better than fighting”. We also peacefully avoided what many believed was imminent civil war when we ended apartheid in 1994.

In addition, 40 African countries have ratified the Pelindaba Treaty, which prohibits the manufacturing, testing and possession of nuclear weapons in African zones. This is arguably the most significant step so many countries in the same region have taken to contribute to peace and security.

Let me be clear: I do not expect the United States, under Obama’s leadership, to fight for us. I would like for him to join us and stand with us. The US is a world leader, a super power that is able to command and exert authority and respect. We need the same for Africa.

At our upcoming town hall, I would like to hear Obama declare the United States’ unequivocal support for a permanent seat for Africa on the UN Security Council. If he does not commit to this, like Mandela, I will not be discouraged and I will use every possible mechanism to achieve this and other reforms for the rest of my life and career. Call this youthful naivety if you will, but as I recall, Nelson Mandela was an idealist of note himself.

As his term of office comes to an end, I want history to record that, like Mandela, Obama stood for what is right even if it was unpopular with some. He has shown the world he is capable of doing this when he opened up talks to end the decades-old trade embargo on Cuba. I know he can do this once more. If he does not, my peers and I need to use that as motivation to fight even harder. I believe it’s what Mandela would have done. I dare us to rise to the occasion.

Mondli Zondo is from South Africa and is a 2016 Mandela Washington Fellow, the flagship programme of President Obama’s Young African Leaders Initiative. He is the director of parliamentary research for the National Freedom Party in the Kwazulu-Natal Provincial Legislature and writes in his personal capacity.