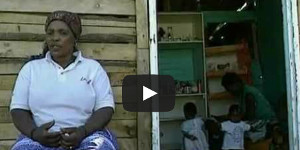 A trip into any of the hundreds of informal settlements in South Africa is a brutal reminder of the need to highlight issues such as the absence of basic services for women living in impoverished conditions.

Women struggle against the diseases that flourish in areas that offer virtually no services.

This clip is from the documentary Transforming informal settlements — The Grootboom case, and The forgotten place.
It looks at the particular impact poverty and lack of services has on women.

In Mooitrap, the informal section of Wallacedene township in the Western Cape, children die from opportunistic infections that they catch in playgrounds filled with faeces. Women might keep their shacks and clothing spotlessly clean, but they are helpless against diseases that thrive in unsanitary conditions.

In Mooitrap, services consist of an ablution block with two rows of 10 toilets and a few concrete basins for thousand of people. The toilets are doorless. To get to them you have to trudge through puddles of mud and dirt. The smell is nauseating.

Children play in between the sinks and toilets because there is nowhere else to play. The toilets are clogged with faeces and newspaper. Not one flushes and they fill up with more and more excrement until they are too full to use. But the municipality does nothing to maintain them.

The municipality says the services are not being paid for. What the municipality is talking about are neglected germ traps and broken taps. We spoke to women living in Mooitrap and discovered how compromised they feel by not having basic services.

Linda has been living in Mooitrap for eight years. She breaks down in tears when she tells us about her communication with the municipality.

“We keep giving them letters airing our grievances, but nothing is ever done except to say that they acknowledge receipt of the letters. They do not care about us.”

She goes on to describe how it is impossible for her to use the doorless toilet in the area. “We usually use buckets in our houses and when we are done there is nowhere to empty them other than outside. We dig holes sometimes but the children usually end up playing in those mounds of faeces. That is why they are sick. There is absolutely nowhere to throw this stuff.”

Lydia, a Mooitrap resident for 16 years, concurs. “As a woman it makes me feel terrible. This place is also conducive to criminal activity. There is also the situation of abuse, to which many of the shebeens are contributing. They are open 24 hours a day and sometimes we wake up to find that someone has been decapitated. These conditions are terrible and everyone sees this as a hopeless, forgotten place — a place that has been abandoned.”

The next day we interview a mother of seven. All her children have severe chest problems because of the constant stench of paraffin fumes in her tiny shack.

She uses paraffin to cook because there is no electricity. She shows us the scabies on her small children’s feet and tells us she cannot afford to take them to a doctor because she is unemployed.

Later in the evening we meet two sangomas. They have lived in Mooitrap for many years. People often bring their children to them with sores on their skins and sometimes severe health problems.

“We are unable to cure everything,” says Nomzi. “These sores are there because for all the dirt the children play in. We cannot cure the dirt problem and these rashes need a doctor’s medicine. My grandson has had terrible sores between his buttocks for months.”

She shows us the skin of a one-year-old boy. The sores are still there, but scabs are beginning to form over the large holes the infected sores have caused.

“He spent a lot of time crying. He could not sit down. It was hard to see a little one suffering so much,” she says. “We cannot understand what is wrong with our government. It is long that we have been fighting to get back our ancestral land and we thought things would change, but nothing has changed.”

Doris Neewat, a social activist, says the situation is tragic. “I am in the community late in the evening and early in the morning and it is always so sad,” she says. “There is the smell of illness and poverty in the air. The children suffer the most. Women also suffer in these communities because they bring up the children and have to bring in the money. This can be very hard on a woman earning a pittance, living in a shack and having to feed an extended family. To top it all, they do not have access to basic things such as proper sanitation. A woman is a dignified figure. Not to have a toilet robs her of that dignity.”

Anthea Housten, a gender activist and director of the Development Action Group, says women are among the most marginalised groups in South Africa.

“Nobody is looking at redressing the position of women in society,” she says. “Access to basic services can tremendously improve the burden that is placed on women. Access to sanitation and to potable water are things that become the problems of women in our community when they are not present.”

The government’s promise of free basic services for all seemed like the light at the end of the tunnel for women living in informal settlements. But this promise has not materialised since privatising basic services has become the government’s top priority. In the meantime, women in informal settlements still worry about where to do their most private ablutions so they are safe from the dangers of rape and murder.

Many still have to worry about where to dispose of their families’ bodily waste without enraging their neighbours or endangering the health of their children, who use the little bits of remaining untainted ground, as playgrounds.

An on-line documentary series produced by Media for Justice. This series highlights the voices of those who are marginalised on the basis of race, class and gender and is a platform to hear the voices of the people in their struggle for social justice and human rights. Presented by Sipho Singiswa and produced by Gillian Schutte For the full story go to www.mediaforjustice.net