Skip to content
Home » The war on our women, children and fellow Africans 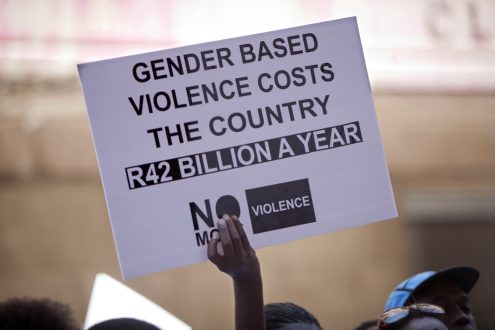 I am ashamed to be a South African man today.

How have we fallen so far as a nation? From being celebrated globally as the ‘Rainbow Nation’ — for our peaceful transition to democracy; for our Constitution which stood as one of the best in the world because of the weight afforded to protecting basic human rights and freedoms; for our incredible diversity; for the promise we held as a nation to redefine the Afro-pessimistic perceptions that have plagued our continent for so long…

How have we become a nation where our women cannot be or feel safe as they go about their daily lives? Even a mundane trip to the Post Office, spaza shop, or your school could be the day some perverted monster decides to end your life in the most horrible manner imaginable. Concerningly, beyond the endless stream of publicised atrocities against women and children, many continue to feel unsafe inside their own homes and workplaces.

South Africa currently has the highest number of rape incidents per 100 000 citizens in the world. As shameful as that may be, these figures do not even take into account rape incidents that go unreported to the police. According to the latest statistics, a woman is also murdered every three hours in South Africa. When our women dared to raise their voices to the powers that be, assembled at a major international conference to chart Africa’s economic trajectory, they were met once again with violence — this time by men in uniform sanctioned by the very leaders who should be hearing their voices and taking decisive action protecting them. Heaven forbid their carefully crafted political rhetoric should be disrupted by the anguished screams of our women and children. Police that are seemingly impotent with respect to protecting our African compatriots were quite capable of restoring their masculinity by beating women into submission.

Conspicuously absent from the tormented cries of our women was the ANC Women’s League. A once respected and powerful faction fighting for the rights of women has deteriorated into a shameful organisation headed by a corrupt alcoholic who went to great lengths to defend a rapist former president. Is it any wonder that men in this country do not respect women when the governing party’s women’s league fights to defend a president accused of rape?

When South African men are not butchering their women, they turn their nefarious attention to our African brothers and sisters. How have we gone from celebrating diversity and the African Renaissance to burning alive our own African brothers in the street? This has been conveniently labelled as ‘xenophobia’ but it’s really not that at all. Xenophobia is the fear of something foreign. What we are seeing playing out in our streets is not the fear of something foreign, it is the culmination of decades of hunger, desperation, anger and confusion. That desperation and angst has been directed toward our African compatriots as a result of the political narrative that sought to divert attention away from the real cancer in our society — greedy, selfish, corrupt leadership.

There are far more Western immigrants in South Africa — controlling vast resources, than there are African immigrants. The latter are also mostly just small-scale entrepreneurs, people who came here with their families and little else, in the hope of building a better life. They do not represent a significant percentage of our economic landscape and are certainly not responsible for the mass unemployment plaguing our country. Yet they are the ones targeted. They are the ones bearing the brunt of our national discontent. This is not xenophobia — this is black on black violence. This is African self-hate.

Inevitably, we will look to apportion blame to someone for this ongoing national crisis. Politicians were quick to change their rhetoric of blaming foreigners for taking jobs, to blaming white people for not investing in the economy. Rather than working to bring calm, they simply seek to redirect the mass vitriol. Should we now expect the same violence plaguing our CBD’s to spill over into our residential suburbs, corporate businesses and shopping malls? Once that fire is ignited, who will be able to stop it?

Amidst all this chaos and discontent, business is expected to invest, create jobs, and grow the economy. The President is planning his next Annual Investment Summit, Treasury has released yet another plan of action to fix the economy, and the National Planning Commission is apparently working on the NDP 2.0 – all adding to further policy uncertainty. It feels, quite frankly, like the band playing on the Titanic as it sank.

So, who should bear responsibility for the poor state of our nation? Who should answer for the collapse of a country that only a decade ago held such immense promise? Much of the blame rests with our collective political leadership – the people who are trusted every four years to work toward the upliftment of our citizens. The people who claim they are the government in waiting, the people who think it’s ok to tweet pictures of the apartheid flag, and the people who have positioned themselves as opposition for the sake of opposition. This is not about any particular political party but about all of them. They collectively influence and direct the national sentiment, belief systems, and sense of identity.

Our people look to their respective political leaders, irrespective of which party they represent, to provide guidance and clarity amidst chaos and uncertainty. We look to our political leaders for hope, but that reassurance will not come from empty promises, dreams, plans, and meaningless words. If we are to restore hope and any chance of a positive future, we need leadership that stands up to take decisive action – to protect our women and children, to safeguard our visiting brothers and sisters from other countries, and to demonstrate that the looting and corruption that has destroyed our country will be punished.

Translocal networks are an alternative approach to governance

They support governance change in communities and connect to share ideas and improve what they do — and they push for inclusion, equality, and justice