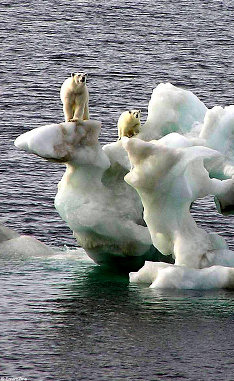 The US Fish and Wildlife Service is considering listing the polar bear as a threatened species, under that country’s Endangered Species Act.

Before blasting this idea as an underhanded ploy by evil environmentalists, it is worth considering the exact meaning of the terms in question. The US criteria are not quite consistent with those of the World Conservation Union (which the cognoscenti abbreviate as IUCN). The latter maintains the famous (or infamous, considering how few of its members have actually gone extinct) Red List of Threatened Species, in which “critically endangered”, “endangered” and “vulnerable”, describing an extremely high, very high or high risk of extinction respectively, are collectively known as “threatened”.

So, on what grounds should the polar bear be listed as threatened? Among the US agency’s own research, a population forecast says much depends on 45-, 75- or 100-year predictions of the extent of Arctic sea ice, and even then, there’s much uncertainty. Besides, that analysis (PDF) has come under attack (PDF) for serious flaws in its methods and analysis. Turns out that after a few years of slight decline in Arctic sea-ice coverage, this winter’s Arctic ice is back to normal levels. (Via Anthony Watts, who links to the useful University of Illinois Cryosphere Today site. It also has a cute story about a stolen polar-bear photo, reproduced above, which Al Gore and the media used to tell yet another lie: “They cling precariously to the top of what is left of the ice floe, their fragile grip the perfect symbol of the tragedy of global warming.” Sob sob. Hat-tip: Hard Rain.)

What about polar-bear population? Well, it’s pretty much stable, it appears. A National Centre for Policy Analysis report entitled Polar Bears on Thin Ice? Not Really!, says that only two of the 20 or so population groups are in decline, which hardly gels with “throughout all or a significant portion of its range”. There’s a picture alongside. The chart illustrates the polar-bear populations that are growing, declining, stable and unknown. Hardly looks like a threatened species, does it?

In fact, although the Red List includes the polar bear (and the hippo, which is responsible for more human deaths in Africa than any other large animal), I can’t see which of the criteria it actually meets. The Inuit around Hudson Bay are saying more need to be hunted, because their population is increasing, and in an amusingly headlined article, “Advertisers urged to kill off polar bears,” James Murray reports on a study that finds advertisers should eschew cute pictures of polar bears to burnish their green image.

Listing a species that isn’t actually endangered is likely to do as much harm to noble conservation efforts as did Norman Myers’s 1979 statement, based on supposition alone, that 40 000 species would go extinct per year until 2000. Didn’t happen. Yet it was repeated in Al Gore’s 1993 book Earth in the Balance, and is only one among many hyperbolic prophesies of mass extinction that simply have not come true and don’t look likely to happen in the foreseeable future either. They’re a bit like the cults who predict the end of the world. They’ve never been right, but of course, that only strengthens their faith that they have to be right sometime soon.

Despite the lack of evidence that the polar bear is, in fact, threatened, Brendon Frazier of the International Fund for Animal Welfare says it should be listed not as threatened, but as endangered. In this AFP article, he explains the reason why:

“An endangered listing can affect the sell-off of the oil drilling rights,” Brandon Frazier, a spokesman for global animal welfare group International Fund for Animal Welfare (IFAW) said. “The authorities would have to get approval through the Fish and Wildlife Service to conduct drilling if there is an endangered species that inhabits the area.” […]

US lawmakers have proposed listing the polar bear as “threatened”, but IFAW said that did not go far enough. “A ‘threatened’ listing leaves open the possibility for exemptions and doesn’t shut loopholes, such as the one that allows Americans to trophy-hunt for polar bears in Canada and bring their heads and hides back to the US,” Frazier told AFP.

So there’s your reason. Anything to stop the big, bad oil companies from drilling. If the polar bear is under threat, the reason is climate change, which in turn is caused by evil humans, who dare pursue industrial development, scientific advance and economic progress.

That’s what they’re fighting for. If the polar bear gets listed as threatened, this can be used to stop almost any new industrial development, anywhere. Even if the impact is so tenuous, nothing but global warming alarmism can rationalise it. If the polar bear gets listed as endangered, then so is the growth in prosperity that has fuelled the rising quality of life among rich and poor alike. It’s not about the polar bear. It’s about us. It is, to quote William F Buckley, about standing athwart history, yelling “Stop!”.

(First published on my own blog under the title, “If polar bears are doomed, we all are“.)