Teenagers are easy to influence. Their plastic minds are wide open to suggestion from just about any source, except for their parents or other authority figures. Popular culture seems to play a particularly large role in shaping their behaviour.

In the literary world, this has led to a great deal of introspection on the part of young adult authors. They are inclined to wonder just how much influence they have through their books and whether they should be more careful with the material they write about. It’s a debate that has been around for centuries.

In 1774 Goethe published a novel entitled The Sorrows of Young Werther. This cheerful tome ends with the eponymous protagonist shooting himself in the head. One hesitates to use the term “went viral” in connection with the 18th century, but there’s no doubt that Young Werther’s example caught on, leading to a veritable rash of young men shooting themselves in the head in imitation of their literary hero. Some European countries actually banned the book in order to put a stop to these copycat tendencies.

Sociologists have since coined the term “The Werther Effect” to refer to an outbreak of suicides in response to a cultural trend.

It is well-known that the media in many countries have strict, self-imposed guidelines for reporting on suicides, which usually entails keeping details to a minimum. Many are also careful about reporting on self-destructive behaviours such as eating disorders and self-mutilation. When it was discovered that teenagers were turning to articles about anorexia for inspiration – or “thinspiration”, as it is known in the Pro-Ana community – most magazines opted to cut down drastically on their use of detail and images.

There is no doubt that popular culture influences teenage behaviour to some extent, although the exact nature of that influence is impossible to determine. All we know for sure is that it is not a simple cause and effect.

Young adult authors have frequently argued about the need to destigmatise certain issues by lifting them out of the realm of taboo. They point out that difficult topics should be dealt with openly, and that pretending something does not exist is not the most responsible way of dealing with it.

Another argument is that the pages of a book provide a safe space within which teenagers can explore the consequences of certain actions. A book like The Girl Who Couldn’t Say No by Tracy Engelbrecht, for example, could be of interest to a teenager contemplating underage sex. Or it could provide comfort for a girl who finds herself already pregnant and wondering what the future holds.

If one assumes that young adult novels do have some influence over teenage behaviour — if only in providing a forum for exploring consequences — does it follow that authors have a moral responsibility toward their young audiences? Should they be modelling responsible behaviour to their readers?

Anyone who genuinely remembers being a teenage reader would immediately answer in the negative.

Teenagers, and indeed most children, have an uncanny ability to detect when they are being preached at, and their reaction to such preaching is almost always resentment. Nothing kills a book faster for a teen than the awareness that some adult agenda lies behind it.

The vast majority of young adult authors are indeed adults, but the best of them are those who remember the deeply anarchic streak that comes with the teenage years, along with a profound distaste for adult moralising.

Of course, individual authors will continue to make decisions about what to include in their novels, and what to leave out. In this they will be dictated to by their own consciences or by pragmatic considerations. Lily Herne, the mother-and-daughter writing team behind the popular Mall Rats series of young adult novels set in a post-zombie-apocalypse Cape Town, took the decision not to include any swearing in their novels. This could well have been influenced by the practical consideration that swearing in young adult novels has a hard time getting past the gatekeepers of teenage fiction, such as school librarians. 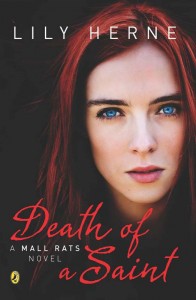 In the end, the only real responsibility young authors have is to tell a good story. Like readers of any age, teenagers respond best to a gripping tale, well told. Authors who want to succeed in the genre should concentrate on honing their storytelling abilities, and keep their moralising tendencies well in check.

Fiona Snyckers is outrageously opinionated for a novelist-housewife. She is the author of the Trinity series of novels, and hopes to continue getting paid to make stuff up. More by Fiona Snyckers