Skip to content
Home » The Magic of Yo-Yo Ma

I know that I am about to witness something magical, Yo-Yo Ma in concert at Kirstenbosch on February 8, 2020. I have been anticipating this evening, holding onto it like a talisman, ever since I decided to hell with it and booked crazily expensive tickets to see my musical hero. Things to look forward to matter, a lot, when you are wrestling with despair. There have been times when I have been afraid that it will not bear up under the weight of my expectations. But mostly, I have imagined lying back on a picnic blanket, staring at the stars while the sounds of Bach’s Cello Suites curl around me like a soft embrace.

Instead, I’m leaning back on a pillow borrowed from the Road Lodge at Cape Town International, propped up against the leg of a temporary platform erected to support a video camera (plus cameraman) focused on the stage. Next to me, I have a pack of Philadelphia Cream Cheese, salami and Salticrax, bought from the airport Woolies and placed on a plastic tray, also borrowed from the Road Lodge, because we forgot paper plates. I’m sipping red dooswyn from a plastic Frozen cup belonging to my three-year-old; transporting glass on a plane is impractical and my husband grabbed these as we left the house.

There’s definitely no stretching out and staring up at the sky, because the lawn is jam packed. There must be 5000 people here, and space is at a premium. Already, a German woman has informed me that she has reserved space for two others on the patch of lawn offered to me by someone else. There was an awkward moment, so I conceded and moved off, wedging myself in next to the camera platform. It has turned out to be a good choice, because nobody else wants to sit there. My husband lies back under the platform and stretches out on the grass, something that would have been impossible otherwise.

The couple behind us offer us some of their Steenberg MCC (“it’s so good, and we can’t finish it”, says the husband). In return, I tell them about Yo-Yo Ma’s performance for JFK in 1962, when he was seven years old. They look up the video on YouTube, and soon the shaky sounds of Leonard Bernstein’s voice are discernible above the gentle hubbub of the crowd. We speculate on how much revenue the concert has pulled in: R4.5-million, say the couple, assuming there are 5000 paying guests there. They looked it up on their cell-phone calculator. I wonder out loud whether everyone here knows that they’re in for nearly three hours of performance with no interval. Judging by the amount of quaffing going on around us, it seems unlikely that the human bladder will hold out for so long.

When, at 7pm, a figure in black bounces onto stage, brandishing a cello and a huge smile, I can barely believe that I am really here to witness this. An artist whose work I have loved and admired for a quarter of a century, whose CDs I’ve listened to over and over again, who gives me hope for humanity; the one person I’d love to have a conversation with. He is playing the work of my favourite composer, one whose work I grew up playing. He sits and almost immediately the notes from the prelude from the Suite I flow from his bow, notes I know and love. A skein of the sublime rises through the cooling air, connecting the audience to music composed three hundred years before, by a man born on the other side of the world thirty-three years after the arrival of Jan Van Riebeeck on a beach on the other side of the mountain looming beside us.

And so follows what feels like a collective meditation, punctuated by the calls of the sombre bulbuls in the trees around us, and broken by whoops and rapturous applause as each Suite ends – and, yes, a constant back and forth to the toilets. My own bladder gives out between Suites IV and V. I listen to Suite V from the sidelines, not wanting to walk back in front of the stage while my idol is playing. The moon rises above the trees and I glance darkly in the direction of the food truck, where a woman behind the counter is banging and laughing. As Yo-Yo Ma drops his bow after the last, quiet notes of Suite V, he stands for applause and I grab my chance. As I walk across to my spot next to the camera platform, I smile up at him and he smiles back and I like to think it was at me. It is during the last movement of Suite VI that the moon is finally visible behind the stage from where my husband and I are seated, and it seems appropriate that even the heavens acknowledge the wonder of it all. When the last note of the last Suite is sounded, the crowd leaps up and shrieks as though they’re cheering a rock star.

There is one more thing to play, a rendition of Johnny Clegg’s Asibonanga with Zolani Mahola. The singer and the cellist are small figures on stage from where we sit, but the screen in front of us showing point of view of the cameras , so that we can see the concentration on Ma’s face as he sight reads, and the unfiltered pleasure he is taking in the experience. Everyone there knows how special this is and how lucky they are to be witnessing it.

And so the magic draws to an end, and Yo-Yo Ma disappears off stage as quickly as he arrived on it. We walk through the gardens in the dark, and far enough down Rhodes Drive to a point where Uber’s surge pricing longer applies, from over R600 down to R173 in the space of two kilometres. Back at the Road Lodge, we finish what’s left of the dooswyn and the salami and the cheese. I replace the borrowed pillow and the tray. The next day, we walk back to the airport in time to catch our 6:20am flight. Later that day, I paint the concert as I had planned to, and the notes curl through the night sky to the moon, in the shapes of bass clefs which remind me of old 80s images of quarks in colliders, and swirling staves filled with notes which are a bugger to draw without smudging the lipstick, and the neon colours of the lights illuminating the trees, and in one corner the outline of a sombre bulbul, calling softly in the dark.

Yo-Yo Ma at Kirstenbosch was almost nothing like I had imagined, and it was wonderful. 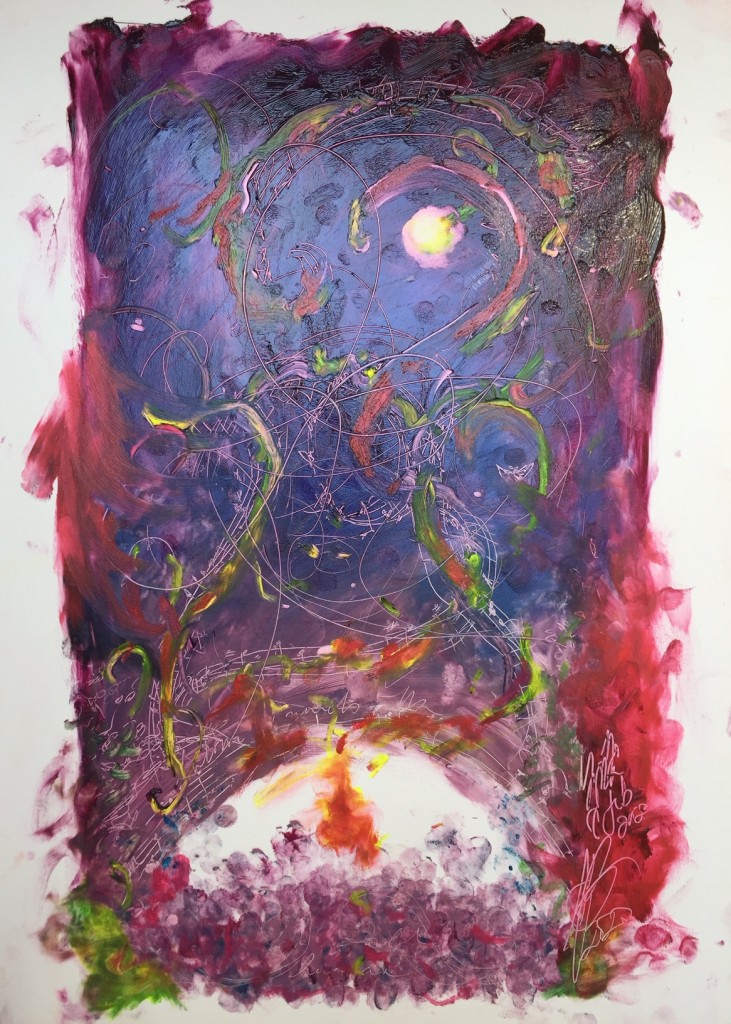