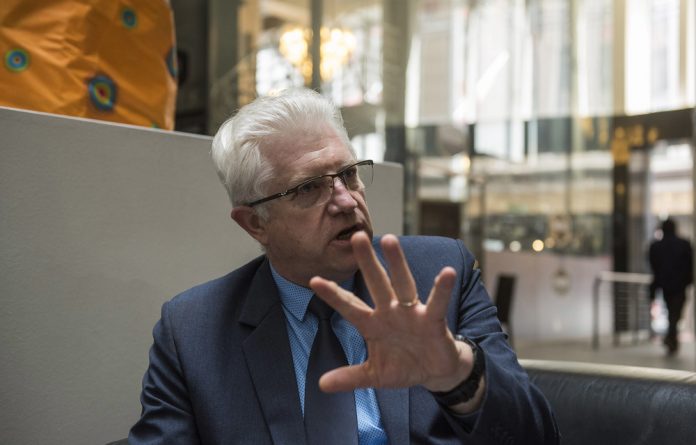 All eyes during February 2020 were turned towards Cyril Ramaphosa’s state of the nation address, adorned, as usual, with the Economic Freedom Fighters’ (EFF) perennial shenanigans. If you lived in the Western Cape, however, the real action was arguably happening elsewhere.

Having heard Alan Winde’s state of the province address, Peter Marais, the Freedom Front Plus’s candidate for Western Cape Premier, took to the podium. A coloured Afrikaans speaker, Marais first took aim at those who refused to sing the Afrikaans section of the national anthem in the provincial parliament — Afrikaans being the most widely spoken language in the province — before turning to Winde.

Marais congratulated Winde for his “visionary” speech, saying it was “meant to instil hope”, before robustly pointing out that Winde lacked the legal authority to implement it, drawing his attention to the fact that police, housing, the education curriculum, school feeding, land reform, taxation and the train network were all the responsibility of the national government.

Referring Winde to section 3, sub section 9 of the Western Cape constitution, he called upon him to request from national government a referendum on federal autonomy, so that section 235 of the South African constitution could be implemented, giving self-determination to the people of the Western Cape, and any other provinces who wanted it.

As Winde listened, poker faced, to Marais’ address, one had to ponder: did Marais have him on the political ropes, or was he in fact a most welcome stalking horse for Winde’s true intentions?

Fighting for You —  A plan of Action for the Western Cape, the Democratic Alliance’s provincial manifesto, pledged to “lead the fight to devolve policing powers and budgets from national to provincial government”, to “fight to take over the management of the rail system in the province from national government” and to “refuse to implement national government’s proposed disastrous National Health Insurance programme in the Western Cape”. In the speech that launched it, Winde declared: “The DA will work to secure the Western Cape’s power supply through independent power producers because Eskom cannot be relied upon to keep the lights on”.

In arriving at these positions the Western Cape’s experiences during the drought no doubt loomed large. It took 19 months from the date the provincial government requested that the drought be declared a national disaster until the national government finally declared it one. By that time the national government had ceased maintenance work on Cape Town’s main Voëlvlei Dam and the department of water and sanitation had no money left to release to the province once the disaster had been declared.

Behind the scenes, a silent war is currently playing out between the DA in the Western Cape and the ANC national government, for whom central control of the state is an essential component of the National Democratic Revolution.

The DA-run City of Cape Town has taken the national government to court to establish the right to procure power independently. Gwede Mantashe attempted to pressurise the City into dropping the application, offering to concede the matter if they did, stating: “When you go to court, you are creating a precedent”; “if they go to court, we will have to oppose the case”, and “We are not going to surrender the power of the national government because there is mischief driving the issue”. The City proceeded with the application and judgment by the Pretoria high court is currently reserved in the matter.

While discussing Winde’s provocative agenda, interim leader John Steenhuisen, answered “yes” when asked if the DA had a special responsibility to the Western Cape electorate. He further elaborated that the DA was deliberately “pushing the envelope”. At the time the DA was launching two further Constitutional Court actions to limit the government’s power during the Covid-19 lockdown. Tensions further escalated when the Western Cape government ignored the education minister’s instructions and re-opened schools in the Western Cape a week ahead of the rest of South Africa.

Meanwhile the ANC aligned teaching unions stated: “The attitude of the Western Cape to define itself outside the collective must not be allowed. South Africa is one country and their insistence to go it alone undermines the unitary nature of our education system. We are not only going to scrutinise but challenge their motive.”

So it would seem that the battle lines have been drawn … but in South African politics nothing is quite as simple as it seems and political irony abounds.

Marais’ call for a referendum on federal autonomy represents a softening of his previous call for full Cape independence which he made when he first joined the FF+ in 2019, quite probably having been reminded by his leadership that 92% of its voter base reside outside the province. Political commentator RW Johnson suggested in 2016 that the DA has a policy of silence on Cape independence. In 2019, 69% of the votes cast for the DA nationally came from outside of the province. When a Cape party poll, also in 2019, suggested that 66% of DA voters in the Western Cape supported a referendum on independence, the only comment was by then DA Premier Bonginkosi Madikizela who dismissed it as “delusional”. Despite this, the Cape Independence Advocacy Group, a political pressure group seeking a referendum on independence, assert that many DA MPs and leaders in the Western Cape privately support not just federal autonomy but secession.

In a final twist of irony, it would be far easier for the Western Cape to obtain full independence than it would be for it to achieve federal autonomy. Autonomy requires a two thirds majority in the national assembly, which, given the ANC’s commitment to centralising power, looks impossible. Full independence only requires a 50%+1 majority of the Western Cape electorate, where the DA currently have 55% of the vote.

One thing is certain, we are entering a fascinating era of South African politics, and it may well be that Ramaphosa isn’t the only politician capable of playing the long game. Can it be that Winde is a poker player extraordinaire?