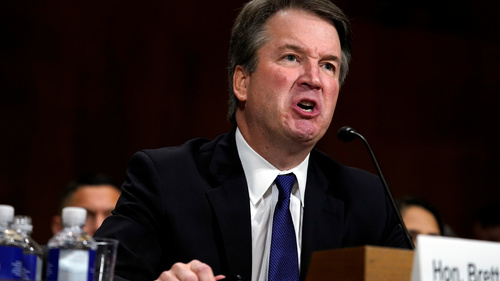 Watching the tragicomedy playing itself out in America around the determined attempt on the part of Trump and the Republicans on the Senate, to appoint Brett Kavanaugh as lifetime judge on the panel of judges of the US Supreme Court, I had the uncanny feeling that this showdown between the forces of retrogressive neoconservatism and progressive members of American society mirrored what was happening across the world (see here). As I am writing, the time is drawing near when Kavanaugh will (probably) be confirmed as Supreme Court judge in the Senate on Saturday morning (American time); only a miracle will prevent that.

The whole saddening episode is so well-known by now that I won’t bore you with all the details, except for this thumbnail sketch. When Donald Trump nominated Kavanaugh as his candidate for filling the vacancy on the Supreme Court, obviously hoping to tilt it for the foreseeable future towards the conservatives, he probably did not expect anyone to throw a spanner in the works, but it happened, in the shape of Psychology professor Dr Christine Blasey-Ford, who came forward with the allegation that Kavanaugh had tried to rape her about 35 years ago when they were both at college in Connecticut.

In the end she gave a tearful testimony to this effect before a Senate committee, while Kavanaugh, in his testimony, vehemently denied that he had ever sexually assaulted a woman in his life. By this time more, similar, allegations had been made by other women, so some Republican senators (notably Jeff Flake of Arizona) insisted on a ‘limited’ FBI investigation to secure his own affirmative vote. This was duly ordered by Trump, and apparently the lightning investigation and subsequent report, which (according to Republicans) did not uncover any damning evidence in favour of Blasey-Ford’s accusations, reassured Republicans sufficiently to secure their final votes in favour of Kavanaugh’s appointment.

This, despite the fact that (as several commentators pointed out, including Stephen Colbert of the Late Show), there are other considerations which should, if taken seriously, torpedo Kavanaugh’s candidacy, notably that several credible people (including an erstwhile Yale classmate; now university professor Chad Ludington have drawn attention to what they call Kavanaugh’s blatant ‘lying’ under oath as far as his drinking habits at college are concerned. They claim that he was often drunk, and also often became belligerent when he was.

By itself I don’t believe indulging in beer-drinking at university is a cardinal sin; many, if not most, young adults do, women included. I recall that, when I represented the University of Port Elizabeth at squash SAU tournaments at various universities several years in a row, the famous ‘boatrace’ drinking contests at evening social gatherings were sometimes won by a certain women’s team (I shan’t mention the university in question...). The thing that is so damning about Kavanaugh — a prospective Supreme Court judge, no less — is that he found it necessary to LIE about it. It is telling that former president Barack Obama has since openly stated that he ‘tried everything’ at college – a refreshingly honest admission in the face of Kavanaugh’s ‘holier-than-though’ mendacity. The point is that this is what the FBI should have included in their investigation.

Moreover, even Republican senators admitted that Dr Blasey-Ford’s testimony was ‘compelling’, despite which they seem to have closed ranks now to assure Kavanaugh’s approval with their slender Senate majority of 51 to the 49 of the Democrats. And several commentators have remarked on the suspicious superfluity of Kavanaugh’s oft-repeated statement about his liking for beer (‘I liked beer’; ‘I still like beer’, etc.). I personally would have found it astonishing that even a party of retrogressive neoconservatives could want such a person on the Supreme Court bench, were it not for my realisation that what this showdown about a Supreme Court appointment symbolises is nothing less than a confrontation between two constituencies in the US that represents a similar confrontation across the world today.

The two constituencies concerned can be named in various ways, the most obvious being ‘neoconservatives’ and ‘progressives’; but whatever descriptions one uses, they index those people in the world who are fervently nationalist, economically capitalist, narrowly religious, and suspicious of the racial, gender or cultural ‘other’, on the one hand, and those who are ‘internationalist’, or open to the multicultural ‘other’ in all its guises, also largely (but not necessarily) capitalist, but with the emphasis on open global economic relations, and ‘post-religious’ in the sense of realising that today one lives in an era where religious metanarratives are no longer persuasive.

It is not only in America, then, where this struggle is happening; one sees it in the convulsions of Britain’s Brexit negotiations with the European Union, and the concomitant responses to these by the British public. It is telling that the Brexiteers who narrowly won the referendum on the question, 'to leave or not to leave', were mostly older people. Why? Because unlike younger people, who are at ease with the presence, in the UK, of migrant workers from other EU countries (and with the opportunities afforded to themselves to work in European countries), older Britons evidently were/are not; nor are they happy about refugees from countries like Syria entering the UK.

But regardless of the economic repercussions of Brexit — and from what I have read they seem considerable — what the decision, to leave the EU, signifies, is the same thing that Trump and the Republicans signify: a return to a nationalist, inward-turned ethos that is unwilling (or perhaps unable) to face a more unified world represented by the ‘Stay’ constituency. Not that one can unambiguously claim that economic relations would be ‘better’ without Brexit – that depends on whether you support neoliberal capitalism unreservedly, and I certainly do not.

But here’s the thing: Part of what it means to be on the side of the ‘progressives’, even if not everything about them is acceptable (one works towards changing these things, for example through the alternative globalisation movement supported by Hardt and Negri and others), the idea of a ‘unified world’ (whatever that may mean) is infinitely preferable to the idea of an endemically divided world, at odds with itself. In such a conflicted world, global war is a much more likely prospect, and — perhaps more importantly — in such a world the capacity for united action in the face of the greatest crisis faced by humanity in its existence (the ecological crisis), is far less than in a globally unified world.

One sees signs of this selfsame conflict between two ways of viewing the world — commonly known as different ideologies, or, in their linguistic manifestation, discourses — in other countries too. In Europe it has expressed itself as the tug-of-war between a far-right nationalist movement and a progressive, globally oriented constituency in France, Germany, the Netherlands, Scandinavian countries, Poland and Hungary, to mention only some. The far-right movement is backward-looking, adhering to a set of values not compatible with those of the progressive movement. In fact, the neoconservatives’ values seek to undo many of the gains by the progressives in the last few decades, such as women’s control over their own bodies, and some success at combating climate change.

Needless to stress, their actions are detrimental for people across the world. And Donald Trump is the epitome of this retrogressive neoconservatism. The very fact that people choose to 'trumpet' approvingly about his economic policies is symptomatic of the crass materialism that lies at the basis of the value-set that he represents. Never mind that he has set the previous gains by the women’s movement back by decades; and there are women who are stupid enough to support this ‘pussy-grabber’!

The kind of world in which people can unite around the givenness of a common humanity, and more broadly a common bond with all living creatures, is beautifully embodied in the television series I wrote about in my previous post. If you can view this series, don’t miss the opportunity; but view all the seasons — it is transformational.