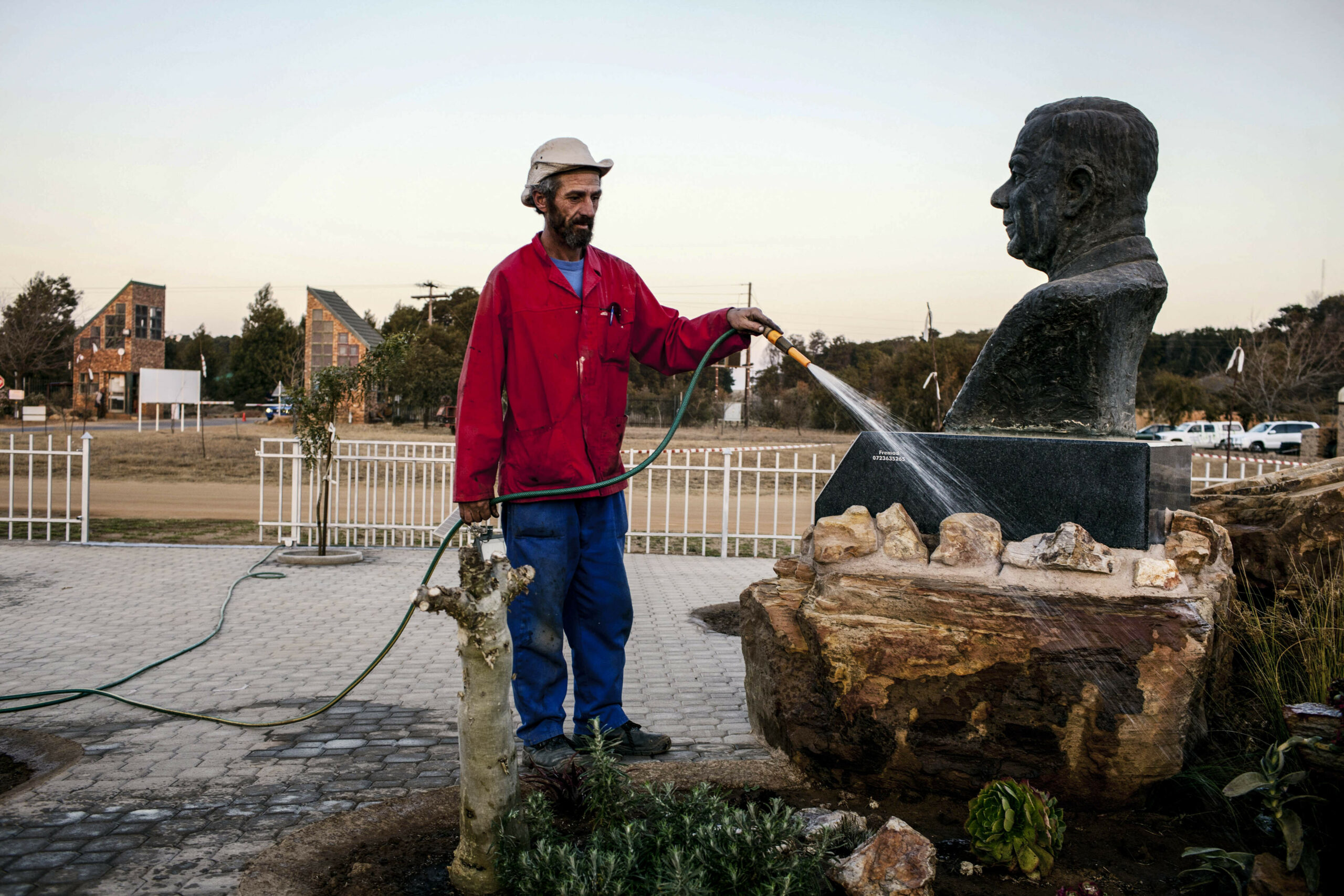 The highway south has a fiercely Afrikaans name. Which makes sense because the place I’m going to, a trip prompted by reading Christopher Hope’s Brothers Under the Skin: Travels in Tyranny, is named after the High priest/Magus/Sculptor of Apartheid (it feels important to avoid the cliché “Architect of Apartheid”, which is starting to feel derogatory to architects in general).

Verwoerdpark is closer than I think. Not even 15 minutes’ drive. Speaking of clichés, I’ve never been anywhere near there in my life.

The mine dumps roll past. One after the other. Great, flat-topped earthen structures that look a bit like burial mounds. There is Pampas grass everywhere. Massive stretches of it. How did it get here? What were the circumstances surrounding its escape from the suburban England of pebbledash, during what must surely have been the early 1970s?

Warehouses. Dozens of them. The size of aircraft carriers. Built to supply the retail chains that feed the shopping malls of Johannesburg.

The first surprise is that Verwoerdpark is not a park at all. It is a suburb.

Which is a bit of a problem for my plan of writing about what the people of Johannesburg were doing on Human Rights Day in a park named after the Ringmaster/Warden/Mechanic of Apartheid.

As soon as I realise that it’s a suburb and not a park, another way of approaching this piece jumps up: I will write about how Verwoerd’s personal suburb, built to house the working class whites of the city, has crumbled into squalor. Perhaps a slightly depressing piece, but at least I can keep the title, of which I am fond.

But this plan too, gets cocked up.

Because Verwoerdpark is not only a suburb, it is also a very neat suburb indeed. All the houses are perfectly maintained, and freshly painted. The lawns lovingly mowed. The hedges well maintained. It’s actually one of the neatest places I’ve ever seen in South Africa — with the possible exception of the freakishly neat golf estates inhabited by aspirational robots from the future/past.

I begin to think that the Chef/Flower arranger/Headmaster of apartheid might not have been that upset after all at how his suburb looks in 2021. Until I drive down the next road and see a group of teenagers, composed of every skin colour imaginable, sitting on a lawn chatting in the way that teenagers will contentedly do for hours on end. This is a sight that would have distressed him deeply.

Further down the road is a school. It is named after one of the bearded, blood-stained, galloping Afrikaner generals from the South African War. Warrior gods of the 1960s South Africa, when this school was built for the education of the white population who worked in the mines and factories of the south.

Now, however, it is very multi-racial indeed. Being a public holiday, the school is almost entirely deserted. But I can see a few teachers, maybe there to pick up a forgotten book or supervise a rehearsal of the school play, and a few pupils maybe serving detention or returning a cricket bat. The ethnic make-up of these groups would not please Hendrik.

There are many schools here. All built during the brief summertime of “Grand Apartheid”. An idea so deranged, that even the English disapproved of it. All these schools look the same. Probably because they were built by the same people, at the same time. All part of Verwoerd’s project to uplift working-class whites.

The “poor white” was a very disturbing problem for the ecstatic believers in the racial superiority of “Europeans”. If they were superior, why could they not read and write? Why could they not get ahead, despite the massive advantages on offer? When a professor at Stellenbosch University, this area was Hendrik’s specialty: The Poor White Problem.

Hendrik believed it all with the passion of a convert. He was not, after all, Afrikaans. He was not even South African. He was Dutch. His parents moved to Africa when he was young and moved a lot. He even attended the school one of my uncles went to in Bulawayo. Educated among the smug, anti-intellectual, sport-loving, pseudo-English boys of Rhodesia. Having no idea how to pronounce his name, they apparently called him Fredrick. The spectacled, formidably bright, English-hating  Hendrik abhorred it all, and hid in his books, emerging only to collect every academic prize imaginable.

I stop at a traffic light. Just ahead of me a small dead bird lies in the road. Perfectly flattened by cars, like a pressed flower in an encyclopaedia.

The Grand Wizard of Apartheid then took his impressively large brain to university, where he also collected every academic bauble available, and began to dream sweaty, feverish ethnic dreams.

It’s getting close to sunset now. The mine dumps on the horizon are, ironically, golden in this light.

Further south, past yet another school (decades old, but neat and perfectly maintained) small blocks of flats begin. Neat Congolese and Zimbabwean families walk to cafes that serve the food from their home countries. Men smoke and talk about football matches between teams of which no South African has ever heard. Kalushi Modern Stars vs Green Eagles. Blessing FC versus Kinshasa Dragons. Lubumbashi Sporting versus Lumiere FC.

The streets are still perfectly swept. Everything neat.

I’m now sure Hendrik would hate everything about Verwoerdpark, especially on Human Rights Day. Human rights were, after all, not something he was big on. The right of the Afrikaner (and a very few barely tolerated English speakers while he needed them) to rule was the thing he believed in. It was why endless three-storey high Afrikaans-speaking schools, named after generals were built. It was why they all have wagon wheels and mountains in their badges, and why they are named after the sweaty Valhalla gods of the tribe.

But I get the feeling that the thing he might hate the most would be the neatness. If his battle for racial superiority were to be defeated, it seems fairly certain that Hendrik would prefer it all to be reduced to rubble and filth. General Steyn High School a looted ruin. The Alexanderplatz bombed into the dust. The Brandenburg Gate collapsed. The mad king’s dream smashed to pieces, stalked by messy birds of prey and remnants of a drunken Red Army.

But that’s not the case. The mad king’s suburb is a nice, neat multi-racial place — Hendrik’s worst nightmare.