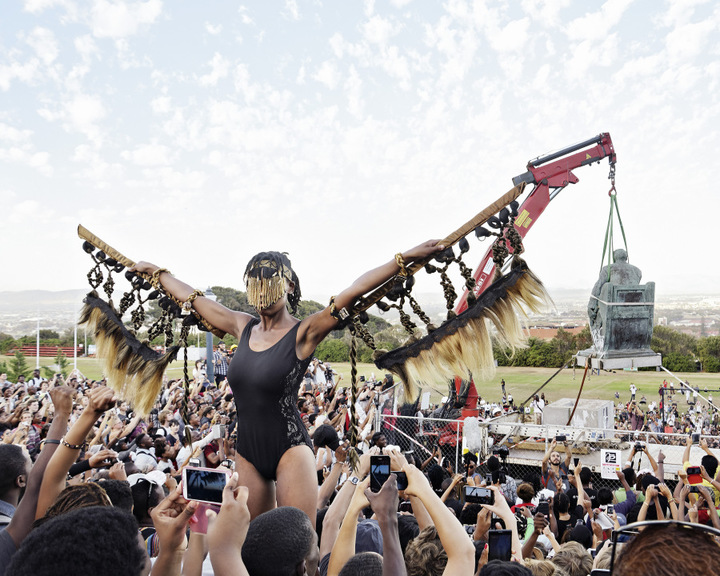 The age of the image is here

More than two decades into South Africa’s democracy, the production of history continues to privilege written narratives, building records while silencing others. As we move deeper into the moment of the circulation of the image, however, we start to see a shift in the hand that writes history. The rapid circulation of images in the digital age gives people with diverse identities and different recollections of the past the opportunity to contend for a say in the construction of the “new South Africa”.

Propelled by images and visual mediums circulating among the public, movements such as Black Lives Matter, Am I Next, Rhodes Must Fall and Fees Must Fall have been responses to deep-rooted tensions that are no longer being stifled. By jolting people out of moral complacency and demonstrating that the work of liberation is not finished, activism and artistic expression have become facilitators of social understanding and, more importantly, political critique.

My recent master’s study at Stellenbosch University offers a reading of artworks of four contemporary South African artists (Sethembile Msezane, Nandipha Mntambo, Athi-Patra Ruga and Mary Sibande) as forms of interpretation and intervention in society. The artworks turn to the body and clothing to engage and reimagine South Africa’s present and future.

The body, being the common frontier of society, presents a symbolic platform on which various socialisations are enacted. Clothing, in its many culturally diverse forms, from clothing to headgear to hair and cosmetics, provides the language through which these socialisations and political standings are expressed. Together, these artworks suggest that apartheid remains a prominent spectre in the post-apartheid moment.

The study engaged aesthetic practices that include sculpture, film, performance art and fashion. It discussed the artworks of Sethembile Msezane’s live, temporary sculptures. As she embodies various black female figures and positions them in the landscape, Msezane challenges commemorative practice and the exclusion of the black female body from public space. It becomes evident which histories are celebrated and which are silenced, as the artist rejects the presentation of the past cemented in public monuments.

The cowhide sculptures of Nandipha Mntambo are moulded on to female silhouettes and used to question normative constructions of sex and ideas linked to body politics, such as femininity, vulnerability and agency. By engaging Nguni clothing and cows, Mntambo creates empty ghost shells evoking African practices, rituals and gendered differences in social kinships.

Performance artist Athi-Patra Ruga constructs his own utopian world of Azania and performs as brightly coloured and provocatively dressed gender non-conforming people who have been alienated from society. Through their invisibility within public space, they are forced to create counter-publics. He uses this displacement and invisibility to promote working outside the confines of norms where unrealisable reimaginings of democracy can persist.

Lastly, Mary Sibande, through her sculptural figure of Sophie, engages with the tropes of domestic work. Adorned in a uniform that imitates lavish gowns from the Victorian era, the artist speaks to the racial and gendered trauma that is linked with the black domestic worker in South Africa. It is a fantastical reimagining of the domestic worker as the figure goes through a series of transformations, starting off submissive until finally reaching liberation. It is a false liberation, however.

My study finds that artworks have the power to influence the movement of history by exposing alternative narratives. Art advocates the other possibility in philosopher Walter Benjamin’s politicisation of aesthetics; which is that art, sculpture, performance, photographs and fashion can jolt and encourage the public to acknowledge their critical potential to mobilise, claim and rewrite history. Art, therefore, aligns with politics in revolutionary or at least progressive ways.

It is often written texts’ fixation with the social relevance of an issue, its contributory factors and its relevant angles of intervention, that risks overlooking the fact that politics requires more than simple interventionist answers. Art becomes a solution, a way in which to gain critical insight into experience, as it requires intervention that goes beyond surveys within impoverished communities, and ethnographies that go beyond observers becoming active witnesses. Art, therefore, is able to capture that which social sciences discourse does not, and the novel ways of seeing politically.

Data from my study shows that the aesthetic appearance of an artwork affords its readers a cognitive experience that evokes past struggles, contemporary experiences and repressed memories that have been silenced in the narration of South Africa’s history. The benefit of engaging with various readings of art and with the clothing as a form of political rhetoric is that the experience of an artwork can teach us something new about our world which can shock the public out of political acceptance and stimulate their social imagination.

By juxtaposing art and social science literature, artists emerge as political actors and their aesthetic practice as a form of cultural labour that heralds an opposing, “negative” relationship to structures of power and domination. In other words, art becomes a subcultural space wherein to interpret the different mediums through which people themselves speak. Through a critical engagement with the art of politics and the politics of art, political challenges can be directed towards the existing order, as it asks how ways of thinking and social relations that aid specific interests become concealed and represented as natural.

I worked with what social sciences texts do not capture, affectively and even cognitively, and propose an engagement between politically motivated aesthetics and scholarly understanding of society. Thus, images can be understood as multifaceted networks of memory and desire in which past experiences are salvaged and, possibly, reclaimed. Only a fractional interpretation of these images is likely. Yet, this is precisely what is significant about them.

The engaged artworks can be seen as medium-specific ways of evoking or giving these particular dream images, material form. By revealing “patches of the past”, which the dominant narratives of social science cannot as easily connect to the present, a political effect can be seen. The juxtaposition of past remnants with our present fears may have the power to intrude on the complacency of citizens who uncritically accept the current political moment.

Kylie Bolton is an English teacher. This article draws from her research towards her master’s degree in arts at Stellenbosch University.