Supermodels are normal too…aren’t they?

Marie Claire SA had an interesting idea for their November issue. They decided to call it the “Love Your Body” issue and invite six major South African ad agencies to come up with campaigns to encourage ordinary women to love the bodies they’ve got. I have yet to see the images they produced, but by all accounts they are fantastic: clever, witty and affirming — a real celebration of ordinary womanhood.

Then Marie Claire released the cover it had chosen for its “Love Your Body” issue, and it looked like this: 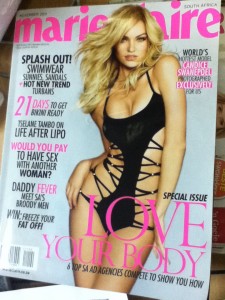 Sam Wilson, editor-in-chief of Women24, Parent24 and Food24, weighed in with a tweet expressing her disappointment that swimwear model Candice Swanepoel’s flawless body should be the one to grace an issue supposedly devoted to encouraging women to accept their bodies as they are. Her tweet sparked a debate that raged on Twitter on and off for most of the day.

Other commentators, myself included, were more disturbed by the cover lines on the magazine promising the following: “21 Days to Get Bikini Ready” (because, well, obviously you aren’t), “Tselane Tambo on Life After Lipo” (liposuction — now there’s a thought), and, most gruesomely of all, “WIN: Freeze Your Fat Off” (just in case liposuction isn’t batshit crazy enough for you). But, you know, by all means go right ahead and love the body you’ve already got. You delusional loser.

The choice of Swanepoel as the cover model was an interesting one. On the one hand, this is the Victoria’s Secret supermodel who recently shocked the world by posing for photographs looking like this: 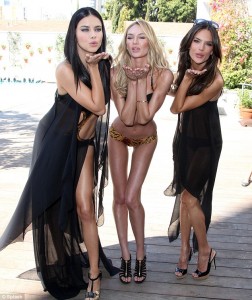 At the time, she responded to media criticism by insisting that she was perfectly healthy and fine, despite glaring evidence to the contrary. On the other hand, a great deal of credit must be given to her for getting back to the point where she could look enviably gorgeous on the cover of Marie Claire. It seems she is now attributing her formerly skeletal frame to “overwork”. I have no way of knowing what kind of weight-loss journey Swanepoel has been on, but just once it would be refreshing for a model to admit that the pressure to be thin in her line of work is vicious, and that it messes up your body image virtually beyond repair.

Whether the glossy, airbrushed perfection of Swanepoel is the most appropriate image to encourage women to accept their own bodies, flaws and all, remains debatable. But as writer, journalist and noteworthy tweeter, Nechama Brodie, points out, those women’s magazines that have been brave enough to experiment with fuller-figured cover girls have invariably experienced an instant and disappointing drop in circulation.

We the public can get all indignant about magazine covers, but the fact remains that we don’t buy them unless they feature absolute perfection. Yes it is equally true that the public can be educated to change its tastes. I remember a time in the 90s when local glossy magazines simply would not feature a black cover girl. That old “nobody will buy it” argument was hauled out and dusted off to explain that one too. But now just 15 years later black covergirls, while not precisely commonplace, have certainly appeared on our magazine racks. And yet the world as we know it has failed to implode.

The tweeter @CapeTown-Girl responded to the debate by posting this piece that succeeds in being acerbic and entertaining, while simultaneously managing to miss the point by several parasangs. The issue under discussion is not whether women should be encouraged to love their bodies or not, but whether a magazine, having decided to devote an entire issue to encouraging women to love their bodies, should, in that very same issue, send out mixed messages specifically designed to generate body anxiety. “Ironic” is one of the words that springs to mind. “Hypocritical” is another.

It is undoubtedly true, as Brodie also points out, that obesity is a far more serious problem in South Africa than rampant thinness. A shocking number of South African adults need to lose a few kilos to get their BMIs back into the healthy range. But it’s highly debatable whether presenting them with images of impossibly photoshopped perfection is any way to encourage this. Emotional overeating is a problem for many overweight people. Can any of us seriously doubt that the relentless barrage of “you’re not good enough … fix this, fix that … try this pill or that surgery” messages contributes to a sense of self-loathing in many women, that in turn contributes to emotional eating? It’s not rocket science that people who feel good about themselves are less likely to indulge in destructive behaviour patterns.

In the 1950s, magazine covergirls tended to be at least two dress sizes bigger than they are today: 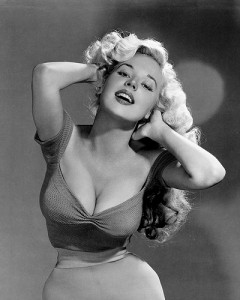 Yet despite this, there were notably fewer obese people around too. We must certainly allow for factors such as the worldwide explosion of junk food in the intervening decades, but maybe, just maybe, the fact that models genuinely used to look like the girl next door made women relax more and eat less.