Brannan is in South Africa as a guest of the Out in Africa gay and lesbian film festival, accompanying another film he stars in, Holding Trevor. He’s probably still answering more questions about Shortbus, though.

He comes from Austin, Texas: “It’s quite religious, Southern — I was raised religious,” he told me. He was “miserable” at high school, he “needed to get out”, so he went to acting school at college in Ohio. That didn’t last long, so he headed for Los Angeles to “try and do it on my own”. He lived there for three years, doing “more modelling than acting”, but that doesn’t seem to have been a very profitable experience either. He left for New York. 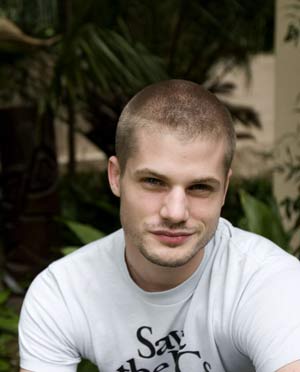 Shortbus may not have broken box-office records in the US, but it went around the world and reached many people. “I’ve had thousands of emails from people who say it touched them in a more personal place than Spider-Man is ever going to touch them,” says Brannan.

And just making it was a great experience. “We all had so much fun making this movie. It was so human, the whole process, rather than just being about money or fame.” Mitchell developed the film with the collaboration of the actors, which is one reason why a song of Brannan’s ended up in the movie. But more of that later.

Brannan met Bret Gorksi, who wrote Holding Trevor and stars as the titular Trevor, at that Ohio acting school. “It’s a miracle that that film happened — it was the first script he ever wrote, and the budget was $50 000. Shortbus is considered a really low-budget movie in the industry, and that cost $2-million.”

Brannan also has a parallel career as a singer-songwriter, launched by that song (Soda Shop) that he strums in Shortbus. He performs at the Labia in Cape Town at 8.30pm on Sunday November 11, and has future dates lined up for Israel and London — the London concerts, he says, “are already sold out”.

Not bad for someone who says that “three years ago, I never thought I could write a song or play a guitar”. But he taught himself: “After I quit acting in LA, I also quit drinking for the first time, and I was an emotional wreck,” says Brannan with a laugh that will be familiar to anyone who’s seen Shortbus or Holding Trevor. “One of the things that came out of that whole period of, like, rebirth was that I bought a guitar and starting playing around with it. I’ve never taken guitar lessons, and to this day I don’t know the name of the strings. I just sit down and make things up.”

Published in Lifestyle and Media

Shaun de Waal was the M&G's literary editor from 1991 to 2005 and has been its chief film critic since 1998. His recent publications include Pride: Protest and Celebration and To Have and to Hold: The Making of Same-Sex Marriage in South Africa..