Skip to content
Home » Searching for a new political cosmology 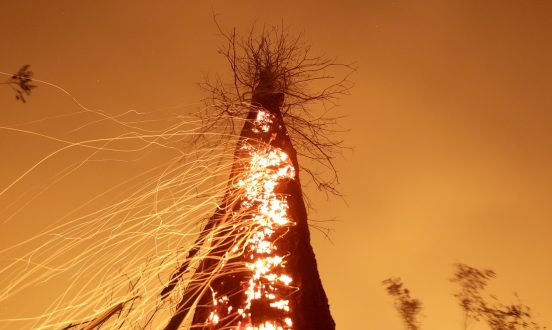 This morning my eye caught a report about Brazil’s climate-change denialist, neoconservative president, Jair Bolsonaro — evidently in an attempt to divert attention from his own egregious responsibility for the fires that rage unabated in (what is rapidly ceasing to be) the Amazon rainforest — accusing Leonardo DiCaprio of ‘paying’ non-governmental organisations to set fire to the Amazon. Such a disingenuous move may convince other, stupidly like-minded people in the world that DiCaprio – one of the few actors actively involved in raising awareness of the eco-crisis facing humanity — would engage in such heinous activities, never mind his continued support of groups fighting to save the Amazon, but I find it preposterous. 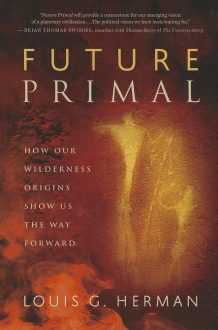 It reminded me of Louis Herman’s wonderful book, Future Primal – How our Wilderness Origins Show us the Way Forward (New World Library, 2013), with its visionary political-philosophical projection of a renewed awareness that, to survive and flourish on planet Earth, humanity has to heed the wisdom of our ancestors, lest we perish due to our shortsightedness. Herman starts the book on a cosmological note, by setting the scene for revisiting the wisdom of the ancients (2013: XI):

Some fourteen billion years ago the entire cosmos, what would become the
great wheeling galaxies with their trillions of blazing suns, burst into being
from a single point, in an unimaginably violent, unfathomably immense explosion
of light and energy. Since that ‘Great Flaring Forth’ the universe has
been expanding, cooling, and growing in complexity. . .and consciousness.
This is the most astounding discovery of the last four hundred years
of modern science and the foundation of our deepest understanding of reality.
It is also the limiting case of credulity. If you can believe this, you can
believe just about anything. Yet our best science tells us it is so: that the infinitely
ordered complexities of the earth — the delicate beauty of birds,
flowers, forests, and oceans; the glories and tragedies of self-conscious humanity
— all of this grows out of that single, infinitely mysterious, explosive
beginning. The cosmos is not so much a place as it is a continually unfolding
event.

Here already Herman touches upon something that most ‘scientific’ cosmologists ignore: the narrative dimension of cosmology, which comprises a site of reconciliation between human stories/histories/herstories and the broader story of the cosmos since the Big Bang, despite the differences between natural science and human narratology (Herman 2013: XI-XII):

Scientific laws and theories generally deal with universal, repeatable,
predictable regularities. In contrast, stories capture the meaning of unique
events — novelties — transforming over time. Every individual human life
is a unique story told in the living. We could say the evolving universe itself
is a story ‘telling us into existence.’ Narrative captures something fundamental
about the nature of reality. The story becomes a primordial unit of
meaning, connecting the present to the past and all things to one another as
they emerge from an original unity. All past cultures and civilisations have
had some intuitive sense that humans lived within a larger process — a story
whose ultimate origin was the most profound and sacred mystery. Each had
a cosmology, a story of origins that formed the foundation of its way of life
and guided its economics and politics. The viability of a society depended
on the success of its cosmology in attuning human activity to the larger, ultimately
unfathomable reality that created and sustained all of life.

Needless to observe, today hardly anyone even knows what ‘a cosmology’ is, let alone how, in the past, it provided people with moral, political and cultural bearings for living. In fact, today’s poor counterpart to such a cosmology, namely, the superficial (because it is not rooted in a more encompassing cosmology) understanding of how one should live economically – imparted by simple-minded neoliberal capitalism – has led humanity into what COULD literally be a dead end (Herman 2013: XII):

Today, the story we tell ourselves about our economics and politics has
run its course and is exhausted. Humanity enters the twenty-first century
in a state of extraordinary crisis. It is a crisis of planetary dimensions involving
every major social and biological system, affecting almost every
aspect of our individual lives. The same method of persuasive scientific
inference we trust to splice genes and rocket humans to the moon tells
us that industrialised humanity is directly responsible for the collapse of
ecosystems on every continent. All our oceans are polluted, our fisheries
dying, coral reefs bleaching, deserts expanding, and forests shrinking.
Almost half the terrestrial surface of the earth has been transformed by
urbanisation and agriculture. There is overwhelming scientific consensus
that human activity is accelerating global warming and climate change,
which in 2012 melted the Arctic ice sheet to its smallest expanse in recorded
history. Scientists warn that our civilisation is forcing a planet-wide tipping
point — a transition in our biosphere that is dramatically changing the conditions
under which civilisation developed and flourished for the past ten
thousand years. They tell us we have entered the Anthropocene, a geological
epoch marked by the destructive impact of industrialised humanity on the
earth. There is a growing awareness that nothing this catastrophic has happened
to life on earth since the last great mass extinction, which ended the
age of dinosaurs sixty-five million years ago. Almost as astounding is the
fact that most human beings are completely unaware of our situation. In
the words of William van Dusen Wishard, we are ‘sleepwalking through the
apocalypse.’

Many people reading this would probably exclaim something like: ‘Not another eco-nut preaching to us!’ And it is understandable that people would develop escape-mechanisms in the face of all the warnings that humanity’s position on Earth is deteriorating by the minute. After all, even if one is aware of all the evidence to this effect, one feels utterly helpless. What CAN one do? I need not here elaborate on what is available in many places as a list of what one can and should do to mitigate the effects of global warming. But perhaps Herman’s explanation of the reasons for the present crisis might help spur people into action (2013: XII):

How has this happened? More than three centuries ago the story driving
our politics decisively separated human self-understanding from the experience
of the natural universe as sacred. Today the primordial experience of
the mystery of our earthly origins has ceased to be a moral force in our lives.
All our dominant institutions, from the global marketplace to the factory
model of industrial production, were constructed on the basis of a radically
constricted understanding of the place of the human in the cosmos. We urgently
need a vision of a new politics and economics that is attuned to our
larger reality.

I do not have the space to elaborate on Herman’s own cosmological-political vision here; suffice it to say that, if you can get hold of this book, you’d be astonished at how much one can learn from our so-called ‘primitive’ ancestors. Taking their wisdom seriously, one could re-orient oneself today in such a manner that the future appears open again, instead of being obscured by the smoke generated from the fires that are destroying our rainforests in many places — in Brazil and Borneo, for instance, where the global demand for palm oil is just one factor responsible for the destruction — because of human greed.

If humanity does wake up soon, it will be too late.