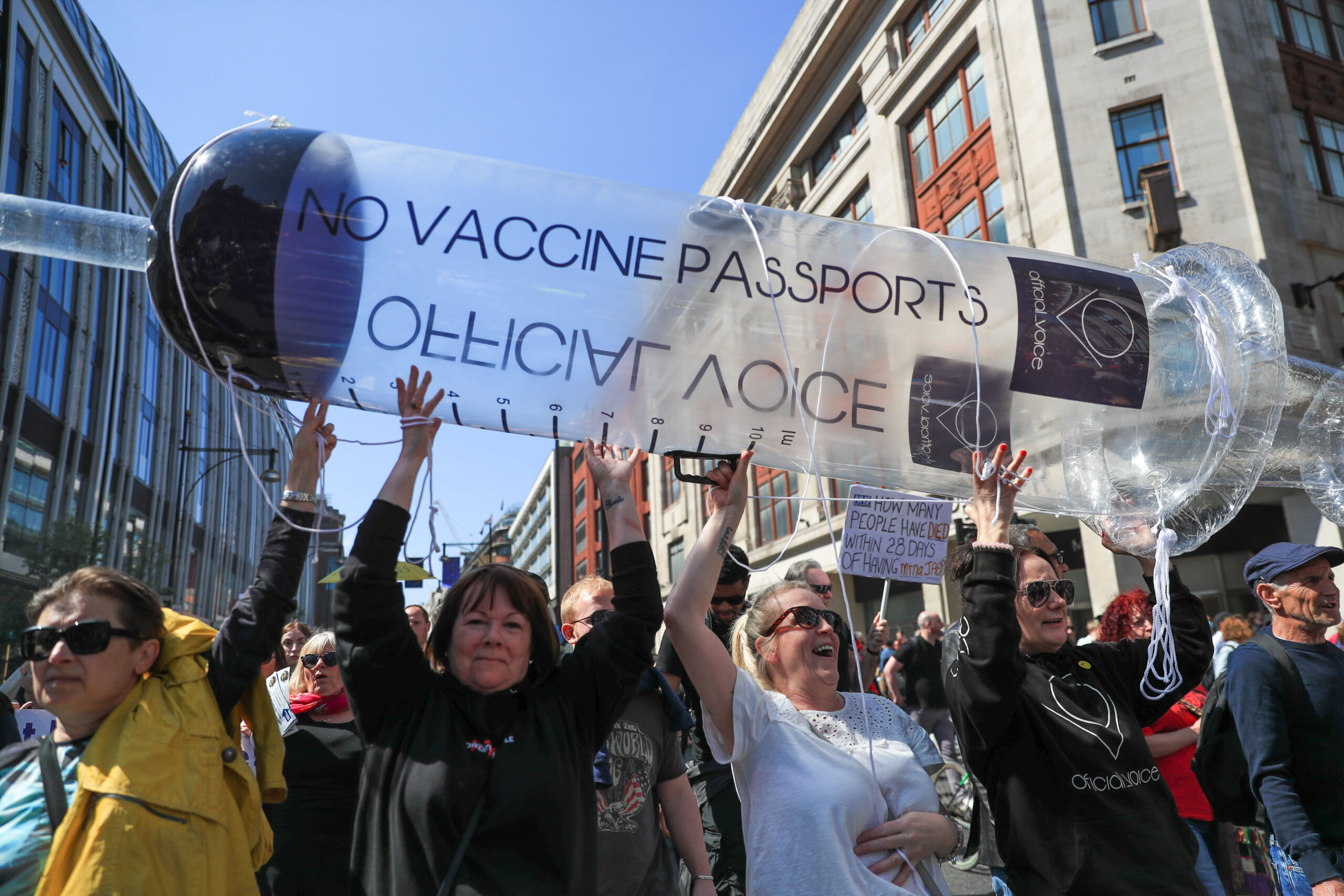 Gattaca, the 1997 dystopian science fiction film by Andrew Niccol, was prescient. It anticipated the inauguration of a newly class-stratified society based on genetics, the manipulation of genes to “improve” humanity – or rather eugenics, to be more precise, where those with supposedly “superior” genes were termed the “valids”, and those with putatively “inferior” genes the “in-valids” (with a rather pointed double entendre, to highlight the implications of such a vicious class system).

If this makes you think of similar genetic practices among the Nazis in the previous century, you would be spot on. If this makes you imagine the dystopian future we face if so-called vaccine passports were to be imposed, (a move the WHO rejects) you would also be right. It would trigger the construction of the same kind of two-tier society as in Gattaca, with the same, predictable constant surveillance, control and resentment as concomitant features.

For reasons that have to do with the genetic selection of desirable hereditary traits of children’s parents, the title of the movie is a composite of four of the letters referring to nucleobases of the human genome – guanine, adenine, thymine, and cytosine. Its tagline is also highly significant for its narrative, as well as for our current global situation. It reads: “There is no gene for the human spirit.” In other words, it does not matter whether you are born a genetically frowned-upon “in-valid”, your human spirit enables you to overcome the obstacles you want to defeat. This, I believe, is the case today, too, in the face of all the ostensibly insurmountable obstacles we face.

Gattaca is the story of the tellingly named Vincent Freeman (Ethan Hawke), an in-valid who was conceived the normal way, and hence faces the prospect of various ailments in his future. After his birth his parents decide to go the eugenics route of gene selection, and hence Vincent’s younger brother, Anton (Loren Dean) turns out to be a “valid”. Vincent and Anton play “chicken” by swimming as far out to sea as they can, and the one who turns back to shore first loses. Although Vincent usually loses, it happens that he challenges Anton one day and actually wins – the first indication that your genetic profile is not absolute destiny.

Because he wants to enter a programme on space travel one day, but is barred from it because of his in-valid status, Vincent, who works as a cleaner at Gattaca Aerospace Corporation, impersonates a “valid”, Jerome Eugene (meaning “good gene or origin”) Morrow (Jude Law), who caused his own paralysis out of frustration that he could only win a silver medal at the Olympics despite his supposedly superior genetic status. Vincent is able to get away with this pretence after undergoing very painful bone-lengthening operations on his legs to gain the necessary length, and with Jerome’s help in providing all his own blood, skin, urine and hair samples for the tests that enable Vincent to be accepted at Gattaca. Eventually he is designated the navigator for a space mission to Titan, the biggest of Saturn’s 82 moons.

The narrative twists and turns; for example, Vincent falls in love with a fellow employee (Irene, played by Uma Thurman). At a murder scene, one of Vincent’s eyelashes is discovered – which cannot be traced because he is not registered as himself, the in-valid Vincent. His brother, a detective at the murder scene, discovers that Vincent is posing as a valid, and warns him against it. Vincent reminds Anton that he has reached this position because of his own efforts. Anton challenges him to a final game of chicken, and is taken aback by Vincent’s strength. He gets into difficulties during the game and Vincent rescues him once again.

On the day of the launch, Jerome informs Vincent that he has saved sufficient DNA samples to last two lifetimes (Jerome intends committing suicide). Just before the launch there is a surprise DNA test for which Vincent lacks the necessary samples, but the doctor in charge of the test reveals that he was aware of Vincent impersonating a “valid”. However, he admires Vincent, who exceeded his own genetic potential. He gives Vincent a pass, and Vincent makes it into the space vessel that sets off to Titan. The moral of the story: Don’t let anyone tell you what you are capable of. The human spirit matters, together with the determination it can give you.

Why is this relevant for the time in which we live? The touted vaccine passports, like the “valid/in-valid” distinction in the film, will result in surveillance and control.

In Ireland, where my daughter lives, citizens have been warned that without a vaccine passport one may even be denied access to supermarkets to buy food, let alone to pubs, clubs, restaurants and the like. This would amount to an egregious denial of human rights as enshrined in most nations’ constitutions, and could have devastating effects on people’s health – and that in the name of the very collective health that the vaccine passports are supposed to guarantee!

If the vaccines had been tried and tested for the usual amount of time – up to 10 years of tests and trials – it would be a different matter altogether. But they have not been tested properly; they have only been given “emergency” clearance in every country where they are being administered, which explains why the pharmaceutical companies involved have been cleared of all liability in the case of side-effects or death after receiving the vaccines. As doctors Sucharit Bhakdi and Karina Reiss put it in their book, Corona Unmasked (2021, p. 4-5; this chapter of which is downloadable in English): “The vaccines are here, and they are being given en masse – yet we don’t know if they work, how well they work, or what they do. That is why these vaccines have not been given regular approval by the EU, but only a ‘conditional approval’ for emergency use. In the next two years, it will be reviewed whether their benefits outweigh the risks. Every person who gets vaccinated now is part of this huge experiment. But, of course, without any liability! Because with vaccinations under emergency rules, the manufacturers make no guarantees whatsoever – in case of serious reactions, or even in case of death, they are free from any liability.”

An independent regional French drug assessment centre demanded publicly that the most frequently used vaccines, those from Pfizer, Moderna, Astra/Zeneca and Johnson & Johnson, be withdrawn because they all lack proof of safety and quality. Pro-life Christian news website Lifesitenews.com reports: “A regional independent drug assessment center, the CTIAP (Centre territorial d’Information indépendante et d’Avis pharmaceutiques), which is linked to the Cholet public hospital in the west of France, recently published a report showing that the vaccines used against Covid were not only submitted to insufficient clinical testing, but that the quality of the active substances, their ‘excipients, some of which are new,’ and the manufacturing processes are problematic. ‘These new excipients should be considered as new active substances,’ the Cholet hospital team stated, in a study that according to them raises issues that have not been commented to date.”

Furthermore, “The authors of the report consider that the ‘variabilities, which impact the very core of the product, could even invalidate any clinical trials conducted’ in the coming months and years. They go so far as to state: ‘Prudence would even dictate that, in all countries where these vaccines against Covid-19 have been marketed, all the batches thus released should be withdrawn immediately; and that these MAs that have been granted should be suspended, or even canceled, as a matter of urgency until further notice.’”

Unless their sensible advice regarding the withdrawal of the vaccines be heeded, we could face the dystopian prospect of a world which – like the fictional one in Gattaca – is riven into two irreconcilable groups, the “vaccine valids” and the “vaccine in-valids”. Would it not be wiser to reject experimental vaccines in favour of tried-and-tested treatment such as Ivermectin? (see https://covid19criticalcare.com/ )

[Ed: According to the fact-checking website Snopes.com, LifeSiteNews is “a known purveyor of misleading information”. LifeSiteNews Media’s YouTube channel was banned in 2021 for persistently promoting Covid-19 misinformation.The report from the CTIAP itself is available here in French.]

Continue the discussion about this story at this link

Published in Health and Lifestyle