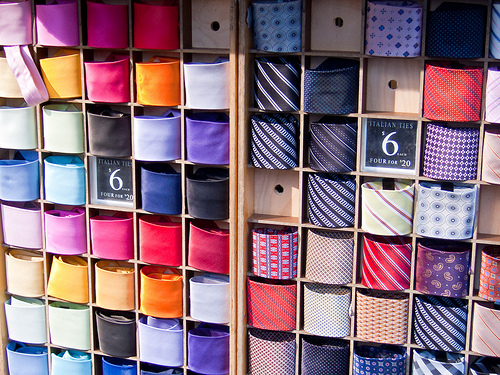 Our sexuality and the demise of the business tie

My mother was the first culprit, bending down to smooth out my collar and adjust my school tie. The electricity of that touch is what stays.

Future women sent glitters down my spine, the pretty Mrs. Martens being foremost in school memory. Blond, full of English literature, Barbie doll clothes equally filled with secrets, she sauntered through the crowd of high school boys to place hands deftly (and without permission!) on my skew collar and tie. I was trapped, spellbound under her little tweakings and then, hey presto! That rope-knot and choker were again snug against my throat and memory. And there I stood among grinning peers: manly, childlike, radiant with the gift of an older woman’s lavishment.

This is how, from an early age, I came to know the breath of young women. Being allowed, with full permission, to see those cupped breasts so almost against my own face. Did Mrs. Martens and the other culprits/victims know that? Of course, they had done their own husbands’ ties in that goodbye moment at the door at the start of a workday: her tender need to touch up his business fashion icon, that miniature of harness and reins.

Primary school was full of female teachers bending down to adjust my tie. No matter what age, you cannot talk – much – when a woman “collars” you to do this. This was long before the philosophical pull of wondering just why it is men find clefts so striking. Or when I first thought it was more of a blessing than a curse to be told to “get knotted”.

It’s a delicious moment, getting your tie squared up by a woman. It’s a male being sorted out, metaphorically having his bottom slapped, encouraged, sent off into a culturally correct world. So I learned to ensure my tie was not in good standing when lady teachers were around.

Perhaps sadly, ties are increasingly out of vogue. The tie-less cause is championed by Mark Zuckerberg (of course) and Richard Branson. Apparently, Sir Richard carries around a pair of (somewhat Freudian) scissors to cut off employees’ ties. Business men, Branson avers, need to think outside the box, and therefore the fashion box.

What is peachy, though, is that regardless of gender, we now get to see more of the chest. And the fluting of that understated masterpiece of sculpture, our collarbones.

Our collarbones! Their half-sunk wings catch the glow of lamps and cameras. They hint at candelabras and sacred ritual, held aloft above what’s more down to earth: the sexy breasts or manly, ruffle-worthy chests.

But, getting back to the demise of ties, a woman no longer has that excuse to walk across to a man and fix his tie and perhaps make, without risk, a delicious pass. Well, as far as all the senses are concerned, it might as well be a delicious pass. And we men are now losing that cutesy device – the iconic tie – to get more attention. I’m going to miss that.