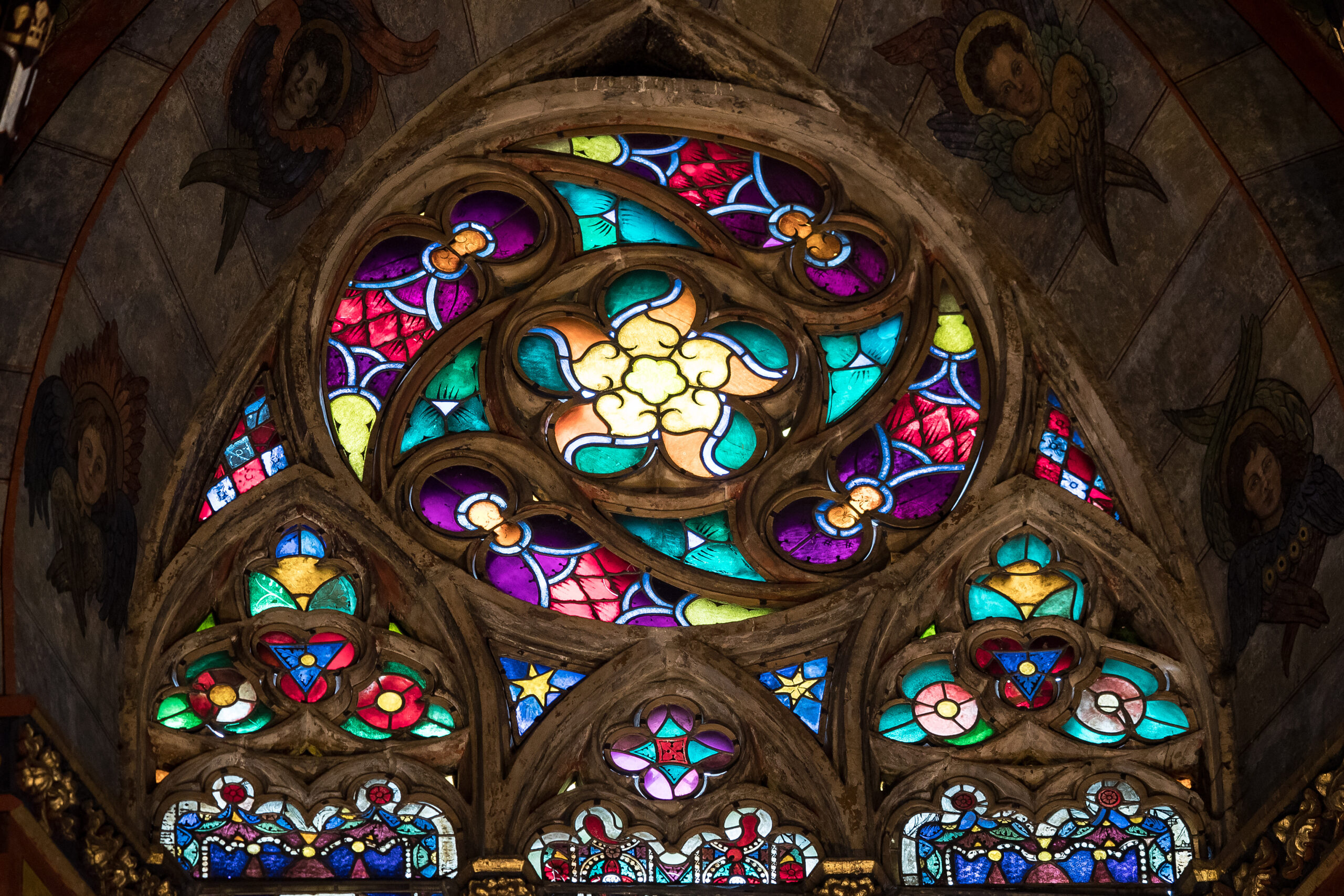 Reflections during a funeral in the time of Covid

As we arrive, a wedding is just finishing.

Because of the pandemic it is a small group.

Like a wedding during wartime? In those black and white photos of a quick ceremony with only five or six guests (wearing hats) before he went back to the frontline and she to her small desk at the Air Raid Co-ordination Office?

This particular couple must have been waiting months to get married. Almost certainly a larger wedding scheduled for earlier in the year was postponed. Is it more special, less cliched as a result?

The church has been closed for months, so demand is high. The weddings are small and the funerals slightly more subdued than is even usually the case. Another small wedding is scheduled to start 10 minutes after the funeral finishes.

Two funerals and a wedding in 180 minutes. A slightly less fun movie.

A bouquet of flowers from a previous funeral are still there and there seems no reason to move them. They stand there, poignantly, not quite fitting in with the rest of the flowers. Whose funeral were they for? We have no idea, even though that funeral was the end of a life, a huge event for a family whose name we do not know.

In line with medical regulations, everyone attending the funeral has to have their temperature taken and then write their contact details on to a form that will most certainly be thrown away. The act of filling out the form seems to please the authorities at the moment, although having the pen pass from hand to hand to hand seems more likely to spread any infection, rather than fight it.

Only during Covid could a pen be so physically dangerous. Perhaps mightier than the sword when it comes to killing the old and the sick.

One by one we all pass the hand sanitiser station and carefully wash our hands. These days we are all Pontius Pilates.

Every second pew is blocked off and must remain empty. A full row. An empty row. A full row. Like keys on a piano.

The coffin arrives and is wheeled into a cozy room that contains old hymn books and the regimental colours from a forgotten war. It is on a bright, steel expandable trolley — an awkward note of mechanisation in this warm, patinaed room.

A trumpeter has been hired to play the last post. A website to advertise his business embroidered on the trumpet case. He makes a joke with the attractive florist, assuming that she too is a professional. She starts to cry – the man in the coffin was a close friend.

A pause in events. Everyone is looking for something to do.

“Should I ask them to move the car?”

Warm words. He was loved. He did many interesting things.

Looking in the glass

The church is lined with stained glass windows. Some new. Some older. In the panes, I see St Thomas, the doubting disciple – the one who perhaps speaks most clearly to the modern world. When the other disciples were debating whether to go with Jesus on the dangerous trip to Jerusalem where Romans, Pharisees and the possibility of crucifixion awaited, they seem to have been divided between those who were too scared to go and those who absolutely believed they would be saved by divine intervention.

Thomas, however, fell into a smaller group of just one.

He was neither cowardly nor, on the other hand, naïve enough to believe in the certainty of miraculous rescue.

Surely that makes him the most selfless and righteous of the 12?

Bible verses are read. I envy those who are certain of their truths. Blah’s history of Julius Caesar may be more factually true than Shakespeare’s Julius Caesar. But the latter tells us more about the fundamental truth of life than the former. And surely that is more important?

Perhaps scripture does the same thing. I think it does for me.

“Forgive them Father, for they know not what they do.

“Blessed are the meek for they shall inherit the earth. My God, my God hast thou forsaken me? Your kingdom come, your will be done, on Earth as it is in heaven. And I will dwell in the house of the Lord forever.”

But it’s very possible that I am mistaken in thinking this.

Another window features The Last Supper.

If there was a last supper, there must have been a last lunch that preceded it? Or perhaps just a last brunch held at about ten-ish, because they knew they were going to have a big supper later on, and didn’t want to be too full from a large midday meal? Although if it were a light lunch of salad, and perhaps fish, it wouldn’t necessarily be a problem?

The window to my left depicts a crucified Christ, hands bleeding, face filled with pain. That image always touches us; perhaps we feel a closeness to this pale figure, because we have all suffered horrors and slovenly cruelty we did not deserve. Inflicted on us when we were blameless — as opposed to those times when we were not and threw our 30 pieces of silver into the bushes, cheeks hot with furious tears.

The slow words of the service bring calm, even to those who believe they are (at best) only metaphorically true. Partly because they are so well known to us. Words worn smooth with long use. Briefly filling the ancient holes inside us.

People talk about him then. They all loved him. Their stories waver between tearful memories and funny tales about what seems to have been a chaotic and energetic life, full of intelligence, laughter and a slightly above-average number of mistakes.

And surely the measure of a life well lived has little to do with status and achievements and more to do with how much one is loved — by people who really know us?

A montage video made of photographs and home movies is played. The music hits hard. Even for me, it is moving.

I think I only met him twice, so I hardly knew him. And I’m now envious of those who did.  It feels strange that he is gone. He is now an everyman, gone. Reminding us all that this is how it ends.

We arrive on our own. And that’s how we leave.

Even though we all know that we will at some point enter the trackless wasteland of grief, it always takes us by surprise. Sooner or later the lottery of tragedy picks us, that empty (endless) moment arrives, and we stagger under the weight of its blow. Shocked that this could happen to us, rather than someone on the news or that lady up the road.

And we wander alone, until we reach the other side.

Medieval theologians compared the briefness of life to a bird flying through the darkness, entering a great hall filled with noise, warm fires and hubbub and then exiting out through a facing window after a few seconds to fly on.

These are ancient forces. Old as a brass ring or a pebble on a long, stony beach.

I look over at his family. Some of them I know very well. I wonder if they know how much I care about them. Probably not.

They seem empty with pain right now. Just shapes that resemble the former selves they were only last week.

We leave the church. The last post is played. The notes are clear, golden, immortal. The trumpet is placed into its branded case. The old soldiers salute. This one in a 30 year-old beret, that one in a too-tight jacket covered in medals, shoes shining. They’ve been practising. The salute is perfect.

Their friend is carried past and placed in the waiting Toyota minivan.

The boy. The man. The athlete. The builder. The friend. The father. The genius. The fool. The soldier. The writer. The entrepreneur with a mixed record of success. All to be interred together in a mass grave of a kind.

The van drives slowly away.

We cross the road to the park on the other side.

The funeral over, people (masks starting to come off) talk in small groups, glad to see each other after months of lockdown. Drinks and snacks. The park is lovely.  Green. The shade is, as shade should always be, dappled. The grass is (as is preferable for grass) unmowed. The snacks have been made by old Afrikaans ladies from a church near to where he grew up, as he had suggested some time ago.

More quiet jokes. About his hair, his marriages, his beloved flaws. Then an argument. Some awkwardness about the argument. A search for a cigarette lighter. “Maybe the man over there has one?”

Laugher. Children running and falling in the unmowed grass.

The wedding party arrives. The bride has green hair.