Cookbooks are a perennial favourite at Christmas time. They are as much fun to give as to receive because the giver stands a good chance of being invited over for dinner to try out a new recipe. We all like to be thought of as the kind of person who has an inner gourmet just waiting to be released.

In South Africa we have an incredibly diverse culinary culture to draw on. Our society might not be a melting pot, but our cookery certainly is. Which makes it all the more mystifying that we inevitably reach for the latest offering from Nigella Lawson or Jamie Oliver, rather than our own home-grown cookbooks.

Perhaps it has something to do with how cookbooks are stocked in bookshops. There is always a floor-to-ceiling display of the latest celebrity chef offering. If you don’t look where you’re going, you’re liable to bring an avalanche of Jamies down on your head. Local cookbooks, on the other hand, are tucked away in musty corners where nothing is displayed face-out and you have to blow off the cobwebs in order to read the titles.

This year things are changing. There has been such an explosion of local food writing that even the bookshops can no longer ignore it. People are realising that it’s all very well to buy the latest Nigella, but many of the ingredients she mentions are not available locally.

Local food writing is produced by people who live, work, shop and cook in South Africa. They have a realistic grasp of our budgets, our tastes and what the local grocery store is likely to stock. They are also well aware of what is in season at different times of the year and aren’t likely to send you hurtling off to Thrupps in search of an elusive bottle of harissa paste.

For an entry-level cookbook, suitable for singletons or young-marrieds, you can’t do better than Bitten by Sarah Graham. Food writing is not a genre known for its simplicity or lack of pretension, so it is refreshing to find a writer as utterly unaffected and enthusiastic as this. While other cookbooks might blithely assume you are familiar with terms such as “blind baking” and “resting the meat”, Graham takes the trouble to explain them carefully and without a hint of patronage.

Her book is gorgeously illustrated and so infectiously written that you will long to try out her recipes. Most usefully of all, she includes a “Meals for a Month” section at the end of the book, along with suggested wine-pairings that will tickle any aspirant foodie’s palate.

If vegetarianism is your thing, there is finally an excellent local cookbook to rely on. There are many good reasons to change to a plant-based diet, ranging from environmental to economic to health considerations. But those who do, particularly after a lifetime of enthusiastic carnivorousness, are frequently stumped about what to make for supper. There are plenty of overseas books on offer, but reliance on imported fruit and vegetables will add so many food miles to your total that any environmental benefit will be entirely cancelled out.

The launch of Luscious Vegetarian by Sonia Cabano and Jade de Waal was greeted with particular enthusiasm in local foodie circles. Whether your ambitions lean towards a quick after-work meal for Meat-free Monday, or an elaborate vegetarian dinner party that stretches all the way from canapés to coffee, this book is your indispensible companion. It is also so exquisitely produced and photographed that it would tempt a lumberjack to turn vegetarian.

For a thoroughly grown-up cookbook that you’ll want to read as much for the lusciousness of the writing as for the recipes, you simply have to try Scrumptious by Jane-Anne Hobbs. Hobbs is a veteran food blogger and sophisticated home cook who nevertheless manages to be entirely unintimidating. You’ll find retro favourites like Coronation Chicken and Spicy Frikkadels nestling next to their more fashionable counterparts. 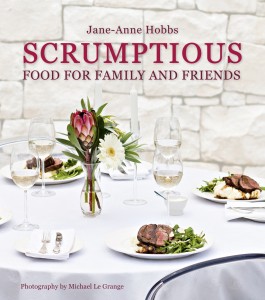 Hobbs’ particular talent lies in adding wholly original twists to popular dishes. She tests every recipe several times on her fortunate family. Her Baked Camembert with Fruit Mincemeat will make many people very happy this Christmas. Your fussiest and most hard-to-please friend, relative or colleague would be absolutely thrilled to receive this book as a gift.

Sometimes a cookbook comes along that is just as much a piece of social history as it is a culinary journey. Karoo Kitchen by Sydda Essop is one such. The coverline states that it contains “heritage recipes and true stories from the heart of South Africa” and that’s exactly right. But even that fails to convey how lovingly and meticulously the narratives, memories and photographs of these Karoo families have been reproduced on the page.

The recipes are a wonderful reminder of a different time, evoking a rural and small-town domestic life that is hardly recognisable to the modern urbanite. The book is pleasingly inclusive in the cultures and backgrounds of the families it writes about. Strikingly, the effect is to show how similar people’s domestic lives were at a time when institutionalised apartheid was trying to make them different.

Anyone who has a connection to the Karoo or an interest in South African history will be utterly charmed and transported by this wonderful book.

Fiona Snyckers is outrageously opinionated for a novelist-housewife. She is the author of the Trinity series of novels, and hopes to continue getting paid to make stuff up. More by Fiona Snyckers