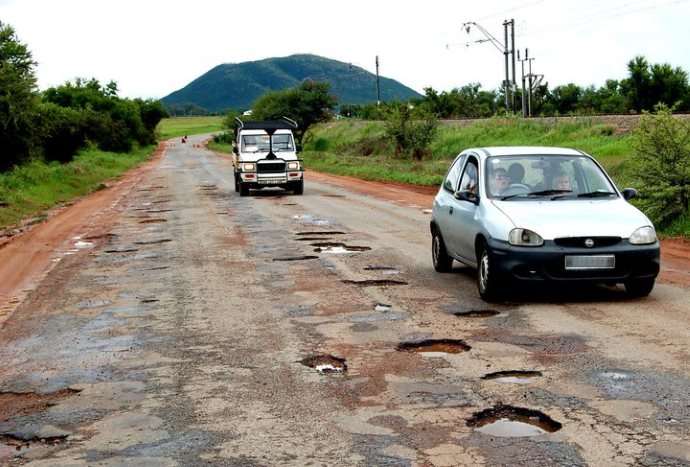 Punctured by a pothole

On April 21, the Johannesburg Road Agency counted 48 000 potholes in this city, although it is more likely, tyre repair places anecdotally report, that the figure is closer to 100 000.

We’re not the only pothole counters in the world.

In February last year, there were 560 000 potholes ruining vehicles in the United Kingdom.

And in January 2020, it was estimated that there were 55-million potholes in the United States.

It seems a global preoccupation; we’re obsessed with potholes. We count them, complain about them, gnash our teeth when we unwittingly drive into them and weep when we have to fork out to repair the damage caused by them.

Our pothole obsession comes with good reason. Potholes are the cause of an alarmingly high number of accidents. Everywhere.

Keeping score, the American Automobile Association found that in the past five years, 16-million drivers in the US had suffered pothole damage — to cars, to limbs.

A few weeks ago, I had to make a grudge purchase: two new tyres, an exorbitant, unexpected and unbudgeted expense. Because potholes.

I’d rather be buying shoes, I grumbled to the man wielding a clipboard at the wheel and tyre shop.

He didn’t look up as he ticked something: “You are, Madame,” he said, “Shoes for your car.”

I muttered under my breath: Stilettos? Moccasins? Clogs? Loafers? Espadrilles?

Still not looking up, the surly attendant said “Sneakers, Madame”.

Well, “sneaky” is an appropriate word. After all, the pothole — the size of a baby’s bath — seemed to magically appear on the road running past the Parkview Golf Course. And I drove into it without even once having glimpsed it.

I didn’t hear the explosion as my tyre hit the crack at the end of the gaping void as much as I felt it.

The car shuddered, like the deep sigh of someone thwarted by fate, and the vibration crept up my spine.

And then that sinking feeling that comes from knowing it’s going to cost you.

I have been accused of not paying enough attention while behind the wheel. I admit that my track record with sleeping policemen is not good; I have been known to hit a 20km speed bump at 40km. The result was once a dented undercarriage and a forever-after rattling chassis.

In my defence, slamming into a bump is not hard on Johannesburg roads where few chevron signs — those little warning beacons that should show drivers where the bumps are — remain intact.

The few still standing in my neighbourhood have had the same fate as the road signs and are riddled with bullet holes. Go figure.

When you pass these holey chevrons at a certain angle, you can see magical sunlight arrows shooting into the earth.

Enchantment was in the air the day my tyre burst. Glorious autumnal weather, the air alive and dancing; sparkling champagne days my mother used to call them, these days that link seasons.

I’d spent the morning at home in my jimjams, on my sun-drenched patio in my reading chair with Nicholas Shakespeare’s excellent novel The Sandpit. (Could you be anything other than a writer with that surname?)

A friend, in a bruising battle with cancer — thankfully, like Lazarus, he rallies often — called after his treatment to say he needed solace. And so I put down my book and headed across town.

I was thinking about food as I sailed past the Parkview Golf Club, heading towards Melville and paying scant driving attention.

It being Earth Day, with saving the planet top of my mind, I was considering a plant-based diet.

The beef and cattle industry is one of the main contributors to global greenhouse gases.

I’d read somewhere that what cows eat and how they digest specific foods has a big effect on how much methane they produce. Digesting hay and grass, for example, produces more methane than if they were breaking down, say, mielies.

Scientists, furiously working towards finding a low burp menu for cows, have found that seaweed would do wonders to reduce cows’ methane-causing enzymes. The problem is that cows are not partial to the taste of salty seaweed.

I was wondering in my driving reverie if it would make the slightest difference if humans shifted to a plant based diet. Would we, in our very large numbers, digest our vegetable food to produce the same methane as cows?

My lovely sick friend, sitting in the restaurant waiting for me, has lived on a plant-based diet his whole life.

It has always been a source of mild annoyance how he has worn his vegetarianism as a badge of honour, lording it over us carnivores, reducing us to flesh-eating brutes.

The sun glinted off something in the tar, a patch of damp, bubbles spurting gently from a burst pipe, a rivulet of water running down the road, filling cracks and crevices.

And holes. Little ones that turn into big ones.

Water will find its level. It will pool where it can, loosen the asphalt and dislodge chunks of tar.

My pothole was invisible and I hit it with such force (even though I really was going at an average, not fast, speed) that I felt the jolt in my back.

Then came that despairing sound of flaps of rubber hitting the black top; the squelch sound that wet flip flops make when being drag-walked across ceramic tiles.

The petrol attendant at the garage I limped into pronounced the damaged tyre beyond repair as he replaced it with the spare that would take me to the nearest wheel-and-tyre outlet.

There the surly man with the clipboard said I was the 11th person whose pothole-burst tyre he had replaced that day: it was just 2.15 in the afternoon.

I read somewhere that the government was paying out millions of rands for damage caused by potholes.

According to Transport Minister Fikile Mbalula, between 1 April and 30 August 2020, 91 pothole claims valued at R1 977 420 were lodged against the department.

Not for me the protracted battle that claiming the R3 127 for my tyres would entail.

But it does mean I’ll have to wait till next winter for those boots I’ve been eyeing on Takealot.