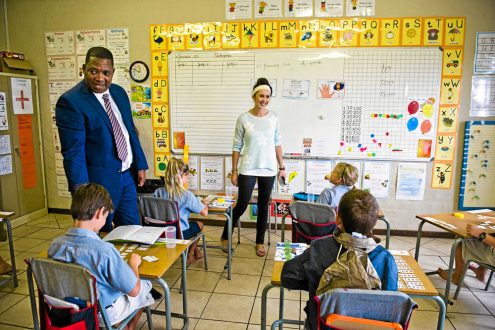 I feel sorry for the ANC, to have an MEC for education in Gauteng who displays his ignorance of what a language is, fundamentally, for all and sundry to see.
As has been widely reported, he has opined that the establishment of a Solidarity and community-funded Afrikaans-medium university would “perpetuate racist agendas”, and would be a “disgrace to the Constitution”, in this way displaying his ignorance of the South African Constitution and of the multifaceted cultural significance of a language — all languages, in fact; not just Afrikaans.

The Constitution explicitly states that: “Everyone has the right to establish and maintain, at their own expense, independent educational institutions” — as long as there is no racial discrimination; in other words, if people of other races wanted to study at the proposed university, they would be free to do so, as long as they are prepared to study in Afrikaans. One also finds the statement in the Constitution that “Everyone has a right to receive education in the official language or languages of their choice in public educational institutions where that education is reasonably practical”. Never mind that the governing party has since made it highly impractical to study at most, if not all, educational institutions — including universities — in any other language than English.

I get the impression that Mr Lesufi has a grudge against Afrikaans-speaking people — at least those supporting the proposed university (which is already functioning, by the way), although he denies being in any way opposed to Afrikaans and Afrikaans-speaking people — for being willing to fund a university where their children can study in their mother tongue, if they so choose, and at a high level of instruction and (which is not the same) education.

And I might add that, from a psychoanalytical perspective — which decodes utterances in the light of possible repressed materials such as anxiety, resentment and desire — I detect resentment on Lesufi’s part: resentment at being shown up as not having catered for the speakers of the nine other official South-African languages by making school and university-education available to them in their own languages.

Did the ANC, and Mr Lesufi, really think that they can simply expunge, or delete, Afrikaans as a language from South Africa? Then they don’t understand the creativity of Afrikaans-speakers in literature, music, philosophy, the social sciences and humanities, and the natural sciences. If I were isiZulu or isiXhosa-speaking, or any of the other indigenous South African languages, I would protest vigorously to the ANC that the development of these languages is grossly neglected in this country.

In the end, it would be up to the speakers and writers of these languages to engage creatively with their own languages in their literary and scientific use, in order to actualise their potential (the way that Afrikaans-speaking people have done, and are still doing) — the anglophiliac ANC would not do it for them. Let me share a story with you to illustrate what I mean.

Years ago at the University of Port Elizabeth (now Nelson Mandela University) I was once accosted by a young, isiXhosa-speaking student (I recall his name was Tim Mkhize) in the course of a philosophy lecture. Angrily he asked me something to the effect of wanting to know how long ‘you whiteys’ are still going ‘to be teaching us philosophy in English, and not in our own language’ — a legitimate question, which was not difficult to answer, by putting the burden of responsibility on him and his fellow isiXhosa-speakers.

I reminded him that, in the European Middle Ages, and for some time into the incipient early modern period, philosophy was taught in Latin at the early universities, and that this situation only changed gradually because certain individuals took the initiative to start writing philosophy in their native tongue(s). These people included Meister Eckhart, who started writing in German, and Renè Descartes (the so-called ‘father’ of modern western philosophy), who started writing in French. They were pioneers, and others soon followed, so that a complex and comprehensive vocabulary was gradually built up in these languages, as it was in other languages like Italian, Dutch and — eventually — Afrikaans.

Hence, I told Tim, if he and like-minded fellow-students would like to study philosophy in their mother tongues, it is up to them to start writing in isiXhosa and the other indigenous African languages, with a view to making these into worthy literary and scientific languages. This is not an easy task, however, I warned him, but an arduous, difficult one, that would require perseverance and sustained creativity. Just like the early modern European philosophers, they would have to coin terms that do not yet exist in their languages to forge a coherent philosophical terminology. I do not know about any such attempt being made, but perhaps there are indigenous language-speakers who are in the process of doing so — who knows?

I know of some instances where African people wrote their PhD theses in their own, indigenous language — one that I recall was in the subject-field of isiXhosa — and I salute them for doing so. This is what people like Mr Lesufi should be encouraging, and just for the record, doing so would be compatible with recognising the right of any language group in South Africa to establish institutions where learning happens through their language. If they are prepared to raise the funds to do so, they should be applauded.

Moreover, there is another, rather obvious, point of view on this issue, which further explains the actions of the people advancing the project of an Afrikaans university, namely good quality education. It is no secret that South African high and primary school education leaves a lot to be desired as far as the quality of education encountered there is concerned. I will not here repeat some of the horror stories of teachers evading their duties, or of the level of mathematics-education in our schools, compared to other countries. And I have personal knowledge of the goings-on at some of our universities that certainly do not reflect high academic standards. Suffice to say that, if this is taken into account, the prospect of a privately funded university seems to coincide with the possibility of setting standards that are higher than those in state or taxpayer-funded universities.

To conclude, I would like to remind Mr Lesufi (and the ANC at large) that a language is the ‘ontological home’ of human beings, which is a philosophical way of saying that it is only when one can articulate something in language that it can truly be said to exist — even in the natural sciences, before there were words denoting fundamental concepts such as ‘atom’ (which comes from the ancient Greeks, by the way, and means, paradoxically, something that cannot be divided further), or ‘electron’, or ‘quark’, one could in a certain sense say that, for human beings, these things did not yet exist.

Language is what Gadamer calls the “ontological horizon” of our world, and importantly, the first language that one learns as an infant is the one that cements one’s understanding of the world; all other languages that one acquires at later stages are grafted upon this primary language, properly called one’s ‘mother tongue’. To be sure, if one comes across novel concepts in secondary languages — ones that do not exist in one’s mother tongue — this would expand one’s linguistic horizon in a manner not provided for as a foundation in one’s first language. This is when enterprising thinkers can, and should, set out to forge new words and expressions retrospectively in their mother tongue to expand its ontological reach. Perhaps Mr Lesufi should lay more emphasis on this need, rather than to interfere in the creative attempts of Afrikaans-speaking people to open up a space for the further development of their language.