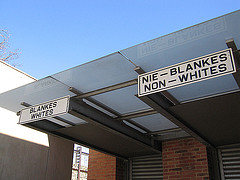 On shame, apartheid, and being a white South African

We live in a constitutional democracy, where, apart from the high levels of crime, the co-existence of people of various races is relatively peaceful, judging by my everyday experiences at the university where I teach, in restaurants and coffee shops, and also on occasion at civic functions. I attended such a function tonight at Port Elizabeth’s Athenaeum, where whites and blacks mingled in a convivial atmosphere, showing their appreciation towards those directly involved in the current programme of revitalizing the city centre.

This programme, driven by the Nelson Mandela Bay Development Agency, has already shown remarkable results in the guise of introducing art — painting, sculpture, mosaic — into city spaces, transforming them from down-at-heel places into ones where people can feel at home. And in doing this, the cooperation between white and black individuals has been tremendous, as testified to by photographic and cinematic records.

The reason why I refer to this renewal project in Port Elizabeth, Nelson Mandela Bay, is to use it as a concrete example of how well, and constructively, South Africans of different races can work together to make things better for everyone. This, I believe, is a salutary reminder of what is possible in this country, especially because the impression is created, from so many quarters, that it could never happen.

The one that comes to mind most readily, is Julius Malema’s divisive rhetoric, calling for expropriation of land without compensation, and generally giving the impression that South African whites are criminals who should be treated as such. Needless to emphasise, such rhetoric is potentially destructive of the good relations that are being built up between the races in the manner referred to earlier — there are thousands of occurrences every day where whites and blacks work together constructively, cementing good relations in the most durable way possible.

But from other quarters, too, indications appear that the basis does not really exist for South Africans to put the past behind them and create a common future by actively participating in the rebuilding and renewal of society. Don’t get me wrong — I don’t believe that apartheid should be forgotten. When perversions like that are consigned to oblivion they could happen again, perhaps in unexpected ways. So, by all means, remember apartheid, just as we should remember the Holocaust, lest such atrocities repeat themselves.

But when I recently read Samantha Vice’s piece on being white in South Africa, where — in the light of our apartheid past — she argues in favour of a sense of (lingering, if not enduring) collective shame on the part of whites, accompanied by a “political” retreat into the background, instead of vigorously criticising black (and white?) South Africans in positions of power when their actions seem to deserve criticism, something appeared to me to be wrong. The reason for this is that Samantha appears to be arguing that the mere fact of being white should make one feel ashamed, even if one did not actively support apartheid, or participate in practices that effectively oppressed blacks.

If she meant — and I don’t believe she did — that white South Africans who supported apartheid by voting for the Nationalist Party of John Vorster, PW Botha and FW de Klerk should feel ashamed of their past actions, I would agree with her, just as I believe anyone who aided and abetted racist practices in other countries should feel shame. But this is not fundamentally different from, say thousands of men, here and abroad, who are virtually irredeemably patriarchal, participating in the oppression and sometimes active abuse of women on a daily basis. They, too, should feel ashamed.

What would be the point of all this shame? Certainly not to withdraw into the background and keep a low profile, although this would perhaps not actively do harm. It is what such withdrawal would not do that is important. It would not compensate for the moral and material harm done in the past, which seems to me to be the requisite thing to do if one feels shame. In the event of such justified shame, there is something to expiate, after all. And would it not be far better to participate constructively in the daily activities of keeping the cultural, economic and political life of a country going (some of which, to be fair, Samantha did allow for)? Such participation could not possibly happen without criticism of one’s political adversaries, however, although I believe that Samantha is right (if this is what she meant) that whites have no right to criticize from the “moral high ground”, as it were. (In fact, no one can; not even the ANC — during the struggle they occupied such “high ground”, but they, and many South African whites, have achieved their goal of a democratic South Africa. Since that time the moral playing fields have been levelled.)

Then there is the fact that many — thousands of — white South Africans actively opposed apartheid and did what they could, in different ways, to subvert it or renounce it. And planting bombs somewhere was not the only way to fight apartheid. Anyone familiar with speech act theory will know that speaking against something — especially in public — is already a way of acting against it. Under apartheid conditions it was always risky to do this, but for those among us who believed that it is better to lose your job, or be thwarted in your career, than to keep quiet about apartheid’s moral reprehensibility, this was never an obstacle. And I would argue that, in contrast with those whites who supported apartheid, either enthusiastically or perhaps passively (that is, just going along with the stream of convention, reminiscent of Adolf Eichmann’s defence, that he was merely being a good civil servant, sending thousands of Jews to their death — what Hannah Arendt called the “banality of evil”), those among us who spoke out against it, for example in our lectures and in our publications, do not have to feel a sense of shame. (Imagine saying that Helen Suzman, who at one time was the only white in the apartheid Parliament to speak out on behalf of the oppressed majority in South Africa, should feel shame because of her whiteness! Or Molly Blackburn, or Janet Cherry, or Colin Eglin.)

I recall a debate I had when, during the 1980s (while I was studying in the US), I spent an evening with self-exiled South African friends in Brooklyn, New York. They had left South Africa out of disgust with apartheid practices, and urged me to do the same, arguing that, by staying in the country, I was indirectly supporting the system by paying taxes to the government. While I granted this, I argued that my staying in the country also afforded me an invaluable opportunity to oppose the system in my lectures and publications, which they — with their rather ineffectual anti-apartheid posters in the kitchen — could not do as effectively. In the end we agreed that the situation was too complex to have cut and dried answers to the question, what sort of opposition was the “best”, morally speaking, as long as one took a firm stance against apartheid. There is no moral “purity” here, when one has to face one’s conscience in your supposedly uncompromising rejection of a moral abomination like apartheid.

No white South African should ever argue that they had no choice but to go along with apartheid, however. As Jean-Paul Sartre — who resisted the Nazi occupation of France resolutely during the 1940s — pointed out to collaborators, they did have a choice. One always has a choice — or in Sartre’s words: we are “condemned to be free”. But those white South Africans who exercised that freedom to denounce apartheid publicly, have no reason to feel ashamed — on the contrary, we have every right to feel justified, today, that we did the right thing.