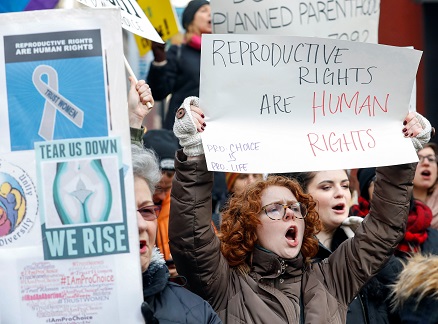 By Amnesty International on 1 February 2017

In his first week as President of the United States of America, Donald Trump has demonstrated a callous disregard for women’s rights by reinstating and extending the so-called global gag rule, a policy which will prevent all organisations receiving US foreign aid for health from including abortion referrals or information within their programmes. Not only have similar policies proved ineffective in reducing abortions in the past, the Global Gag Rule has been shown to increase the number of unsafe abortions because it reduces access to a whole range of family planning services.

Trump´s version of the global gag rule expands the policy to all global US health funding, including HIV/AIDS or maternal health. In southern Africa, where HIV-related illnesses and unsafe abortions are a major driver of pregnancy-related deaths. Health experts, including aid agency, Doctors without Borders, warn that thousands of lives are at risk.

The regressive measures taken by Trump, stand in stark contrast to, for example, the provisions of South Africa’s Choice on Termination of Pregnancy Act, which came into force 20 years ago this week. The Act places an obligation on health professionals to provide pregnant women with abortion services and information about their right to terminate their pregnancy. The Act also states that any person obstructing a lawful termination of pregnancy is committing an offence, a provision praised by United Nations human rights experts.

The Choice on Termination of Pregnancy Act legalised abortion on broad grounds and is credited with saving thousands of lives and advancing women’s rights. Advocates for the Act emphasised clear medical evidence that unsafe abortion resulted in avoidable deaths and injuries, predominately among black and marginalised women and girls who could not afford to travel to countries such as the UK to access safe legal services. The argument was also made in terms of enhancing gender equality as the law would enable women and girls to make free choices about their own sexual and reproductive lives.

Human rights experts at the United Nations and the African Commission of Human and People’s Rights have consistently recommended that countries should make abortion more accessible. On the continent, the African Union’s Maputo Plan of Action 2016-2030, specifically requires states to reduce unsafe abortion and guarantee access to safe abortions. These expert recommendations offer timely guidance.

Despite having one of the most progressive abortion laws in the world, many women and girls in South Africa still struggle to access safe abortion services in 2017. A briefing published this week by Amnesty International and the Women’s Health Research Unit at the University of Cape Town highlights pervasive barriers to abortion services and information. These include the failure of the government to regulate the practice of ‘conscientious objection’ through which health professionals can refuse to provide abortion services on the basis of their beliefs. Abortion stigma is deeply rooted and reinforced by ‘conscientious objection’, which implies that abortion is wrong or shameful.

The African Commission on Human and People’s Rights have called on states to address stigmatisation and discrimination related to reproductive health. Under regional and international human rights standards, South Africa has a duty to ensure that ‘conscientious objection’ does not impact on access to services and that a functioning referral process guarantees timely and appropriate quality care to every person seeking an abortion.
Good laws are only as good as their implementation.

When abortion stigma is unchallenged, or if women and girls don’t have the correct information of which facilities offer abortion services, or if accessing an abortion is only possible after referral delays or if the nearest facility is tens of kilometres away and requires undertaking journeys that cost potentially thousands of rands – then the gains under the Choice on Termination of Pregnancy Act remain on paper. Women and girls who are unable to access safe and legal abortion care, because or in part of such barriers, may be compelled to seek unsafe alternatives from the plethora of illegal providers operating throughout the country.

Among the briefing recommendations, Amnesty International has called on the government to implement clear guidelines to regulate ‘conscientious objection’, publish lists of facilities offering termination of pregnancy services and collect data on the number of deaths and injuries as a result of unsafe abortions.

In 2017 marginalised women and girls remain on the frontline of human rights abuses. As human rights advocates, Amnesty International opposes all conditions on any international assistance and cooperation, which result in human rights abuses. Full implementation of the Choice on Termination of Pregnancy Act in line with South Africa’s national law and international human rights obligations could help buffer against some of the shock waves of Trump’s stigmatising policies. It is vital to ensure – now more than ever – that the hard fought for rights are implemented.