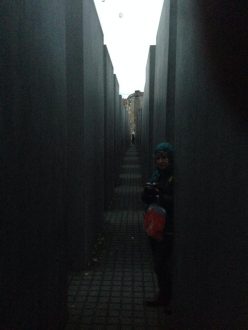 When one finds oneself on a busy street in modern Berlin — capital of a reunified Germany since June 20 1991 — it is difficult to believe that it has grown into this city in the course of seven centuries, at least as far as its written history goes. The latter records that in the early 13th century it was one of two fishing settlements on opposite banks of the Spree river, the other being Cölln. Through the centuries Berlin has seen almost 500 years of rule by the House of Hohenzollern, its chequered history witnessing impressive growth and achievements as well as devastations, such as the bubonic plague and the Thirty Years’ War (of the 17th century). But perhaps most devastating of all were the effects of the two world wars of the 20th century on the city and the rest of Germany – particularly the rise of the Third Reich under Hitler and the Nazis, leading to World War II, when large parts of Berlin were destroyed during bombing raids.

But Berlin has risen like a Phoenix from the ashes. We are here for a conference, which takes some adjustment, having landed here yesterday after leaving temperatures around 30-35°C in the Western Cape, and encountering near freezing-point temperatures here. This has not prevented us from exploring the city’s rich architectural heritage, however, in addition to its other cultural attractions, not least of which are the beautiful Weihnachtsmärkten (Christmas markets), scattered throughout the city.

As for architecture and art, Berlin has been described as more like an open-air art gallery than a city. This impression is strengthened when one savours the concentration of stunning modern and postmodern architecture comprising, and around the Potsdamer Platz. In the first category there are buildings by Renzo Piano and Helmut Jahn, and further away the deconstructive architecture of Frank Gehry and Daniel Libeskind simultaneously contrasts with and strengthens the modern architectural works.

Potsdamer Platz is a good example of Berliner tradition and renewal. Back in 1831 it was a park, but when a railway station was constructed there it quickly developed into an important centre, from where Berlin’s first ever train departed. During the Charleston-crazed 1920s it was a popular place for entertainment – in fact, the busiest plaza in all of Europe. Virtually reduced to rubble during WW II, it was only in the 1990s that its reconstruction began in earnest, quickly developing into the largest such reconstruction area in Europe. So, a century after its first major entertainment and commercial role in Berlin, Potsdamer Platz has again attained that stature.

It consists, first, of the popular Sony Centre, designed by Helmut Jahn. It is a large, hyper-modern steel-and-glass complex, which reverberates with the feeling of power-through-technology — the life-blood (if it were a living thing) of late modernity — it has been described (appropriately, considering its nominal link with Sony-Japan) as displaying a kind of ‘urban corporate cyberpunk aesthetic’ sensibility. Not surprisingly, it is very popular among Berliners and visitors alike, with its large pool and fountains under a towering roof and the piazza with its open-air feeling, juxtaposed by various stores and restaurants. One of its most impressive features is its IMAX cinema, projecting science or nature films onto screens-in-the-round. Appropriately, the centre also houses the Museum of Film and Television — a rich resource for researchers on the history of these technical-artistic practices, because it covers their entire history, with an emphasis on Germany’s contribution to their development. 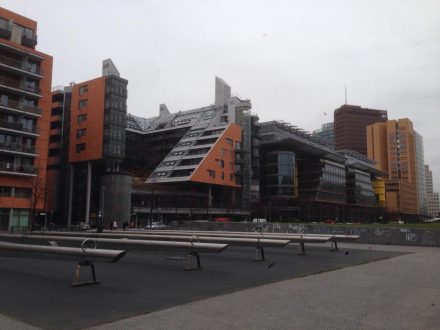 Potsdamer Platz also features the so-called Arkaden — a large shopping and eating complex covering three floors — as well as the Theatre Complex, designed by Renzo Piano and dedicated to the great German actress from Berlin, Marlene Dietrich. It is the venue for the annual, famous, 10-day ‘Berlinale’ film festival, where many world film premieres usually take place. The Daimler Quartier – designed by Renzo Piano and Christoph Kohlbecker – consisting of no fewer than 19 modern structures, has to be added to the above. One of its component buildings, the Kollhof Tower, has to be singled out here – it boasts an observation platform almost a hundred meters above ground – called the Panoramapunkt – reached by the quickest elevator in Europe, and affording spectacular views of the city.

All-in-all, from a philosophical-architectural perspective, although Potsdamer Platz is undeniably impressive as a complex spatial configuration of late modern technological hegemony, its failure to accommodate as much as a hint of human finitude and mortality means that it refuses to acknowledge humanity in its totality. Like American culture, it only really projects the spatial-architectural aspiration towards an impossible technological immortality – something accurately described by Gil Germain in his book, Thinking about Technology (Lexington 2017).

From this perspective (of acknowledging the multi-dimensionality of human existence in architectural terms), for me personally the most striking and memorable contemporary architectural work encountered in Berlin is Daniel Libeskind’s building that forms part of the Jüdische Museum Berlin — otherwise a complex of library archives, gardens and exhibition spaces. Like all truly deconstructive / poststructuralist buildings, this one by Libeskind has a highly intellectual aspect to it, although – as in any successful architectural work — this is embodied in its spatial qualities, which here refuse the visitor any sense of spatial-visual security. Instead, its emphasis on a sense of emptiness, as well as disruptive, slanting surfaces, claustrophobically narrow galleries and unexpected twists and turns, is a fitting intellectual as well as affective reminder of the inexpressible loss of life and destruction of Jewish culture during the Holocaust (which, unbelievably, some people still deny to have taken place to this day).

When experiencing such architecture that communicates, spatially, an event of this (negative) magnitude, one is reminded of its signifying power, despite the fact that architects, including Libeskind, always only have the singular, variegated language of material space at their disposal – depth, height, texture, surfaces, modulation, material density, and so on. Altogether, entering this building has been one of the most moving experiences of my life.

The Libeskind Building at the Jewish Museum has to be seen together with the holocaust Memorial on Ebertstrasse, with its expanse of mute concrete slabs, gradually rising in height above visitors as they walk down the narrow spaces separating them — testament to the ineffable horror of the Holocaust, which instantiates the near-genocide of a group of (approximately six million) human beings just because they bore the name of the Jewish nation. The latter comprises, after all, people and human beings just like the rest of us (as Shakespeare so eloquently reminded his contemporaries in The Merchant of Venice). This is, and should be a powerful reminder of the effects of ineradicable, irrational hatred, particularly at a time — that is, the present — when such (xenophobic) hatred is conspicuously raising its ugly head again in many places around the world. 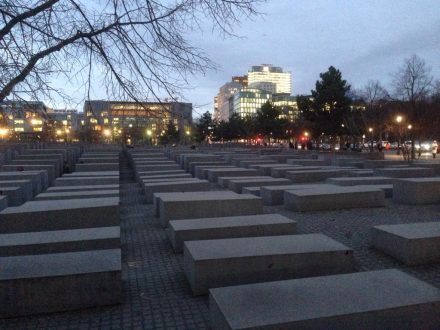 It is impossible to do justice to all the instances of modern architecture in Berlin in such a limited space as this — much less so when architecture of different epochs and styles is considered. That will have to wait for another occasion.