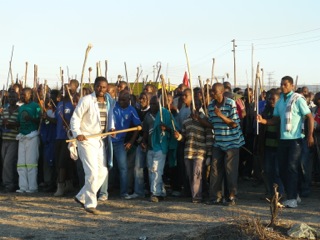 Marikana widows want BASF to admit its complicity as part of the platinum supply chain.

The extractive sector in post-apartheid South Africa remains a hotbed of labour and environmental exploitation, with people still working underground in unsafe, unhealthy conditions.  Mining communities continue to be excluded from having a fair share of the wealth accumulated from the land on which they live. The Marikana massacre is one of the most significant reminders of the corporate impunity and ruthless profit-maximising ways in which the sector is run.

It is not only the mining companies that should be questioned but also those whose wealth is made from their practices, their customers and the investors who are complicit in the failures of the sector. Marikana offers a moment to reckon with the entire supply chain of the extractive system — which, four years after the massacre, remains unchanged.

With justice elusive, earlier this year widows took their battle for justice to BASF, the largest chemical producer in the world and a principal Lonmin customer that buys platinum worth about €450-million a year. The chemical company describes itself as a corporate that “combine[s] economic success with environmental protection and social responsibility”. It is also a founding member of the United Nations Global Compact, “a call to companies to align strategies and operations with universal principles on human rights, labour, environment and anti-corruption, and take actions that advance societal goals”.

Despite this, the company has failed to ensure that its supply chain adheres to these principles. During BASF’s annual shareholders’ meeting, a South African delegation supported by thousands of Germans and shareholders put forward a countermotion asking BASF to acknowledge its responsibility in the supply chain by pushing for better working and living conditions at Lonmin.

The corporate was also asked to pay €8-million from its declared profits for 2015 into a special fund to compensate the Marikana victims, roughly the equivalent of one cent a share.

In a powerful speech Ntombizolile Mosebetsane, widow of slain miner Thabiso Mosebetsane, told those present: “You, BASF, are saying that now it is all better. But we say to you: all is not well with us. Lonmin has not repaired the harm they have done. They have not paid reparation. What Lonmin has claimed they are doing to assist us has caused more harm and division among us. They have excluded some of us from what they have offered to others.”
This was a direct response to Lonmin’s claims that it has done enough, when all it has offered were pension and life benefits, which are obligatory statutory requirements for workers who die on the mines. Even the offer to have a family member replace one of those murdered is common practice on mines, so this cannot be seen as compensation.

One of those who took up the replacement jobs is the 19-year-old daughter of Phumzile Sokanyile, who was killed in the days leading up to August 16 2012. To take up the job, she had to drop out of her final year of high school.
Although Lonmin took responsibility for educating some of the children of those slain, this year the mine allegedly claimed it could no longer afford to buy toiletries for them. One of the widows said that “we live in fear that they will next tell us that they can no longer pay for stationery, then school fees will follow”.

Despite this and the findings of the Farlam Commission of Inquiry — as well as research from different organisations and the well-documented omissions, failures and breaches of law by Lonmin put forward during the inquiry — BASF continues to turn a blind eye to the deep injustice tainting its supply chain.

Responding to the delegation, Kurt Bock, the chairperson of BASF, said: “We understand your need … [although] the problems that people have in South Africa … do have a bearing on us in Germany, … we cannot solve here all of the problems you have in South Africa. We contribute by being a good partner for Lonmin, and we confirm that Lonmin has complied with our requirements.”

He added that a BASF probe “found that Lonmin has addressed all the main problems causing the massacre, and has assisted those harmed by it”. But the audit results have not been made public.

Their response is an important reminder that much more than fancy commitments made in annual reports is needed to change the intolerable conditions in Marikana. As we commemorate the fourth anniversary of the massacre, we should be reminded that the affected families are yet to receive compensation and that conditions remain largely unchanged. The family members who have been employed by Lonmin continue to work in the same conditions as the slain miners did; they are not earning the living wage for which their loved ones fought. The companies that continue to let Lonmin get away with it are part of a system of enrichment tainted by the blood of workers.

This article was first published by the Mail & Guardian.