The police in South Africa today remind me of the “kitskonstabels” (instant constables) the old National Party inducted into the police. Ill-trained and brutal, they were used for the dirty work of quelling unrest in the townships. Today, the government is throwing money at the crime problem; the police may be getting more bodies and more gear, but from what I’ve seen recently, they’re pretty pathetic, as a rule. Shouldn’t we be spending more money on training?

A comment on a previous post on my blog about the police noted that many of our cops — especially in the Johannesburg metropolitan police force — are overweight. Many do indeed appear too unfit to do much more than shoot a fleeing suspect in the back. That they don’t do so more often is probably a function of a lack of firearm training, an extraordinary facility in issuing “spot fines” (as bribes are known around here), or simply being unable to extract a weapon from the flab. 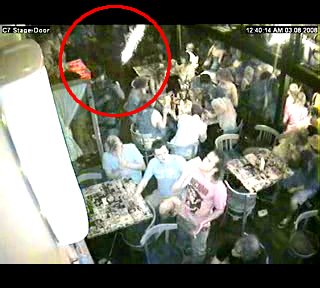 The lack of training goes way beyond fitness, though. Eye-popping CCTV evidence has been doing the rounds of a “drug raid” on Bohemia, a bar in Stellenbosch. Wouter Jonker, a student at Stellenbosch University, has a good collection.

What cop thinks firing a weapon into the ceiling of a two-floor establishment is a reasonable tactic during a raid? What cop believes throwing glasses at innocent patrons is an effective tactic? What sort of impotent cop needs to spray Mace in the face of a girl sitting on the floor with her hands up? Would that be the same cop who committed sexual assault on an innocent bystander? What commanding officer can pull “evidence” from his breast pocket and wave it in the bar manager’s face? What sorry excuse for a cop is authorised to punch random people, men and women, in the face? What cop is permitted to flat-hand people so their eardrums pop? What cop is authorised to confiscate cameras on the scene? What incompetent cop raids three bars, and manages to find just six pieces of hashish, 150g dagga and some cocaine? Mothers find more in the pockets of students’ dirty laundry! What brain-dead cop leaves what meagre evidence he could find behind? And what cop with any shred of self-respect does all this, but makes not a single arrest?

The cops are largely denying what the CCTV footage clearly shows. The bullets in the ceiling, they say, might have been put there by “hostile owners”. Presumably they also put the muzzle-flashes in the video, the joints in the CO’s pocket, and the hand in the poor girl’s panties.

Another post on Jonker’s site quotes the proper procedure for a drug bust in a public entertainment venue. It resembles what we saw here in exactly no respects. Every single one of these cops belongs in jail. 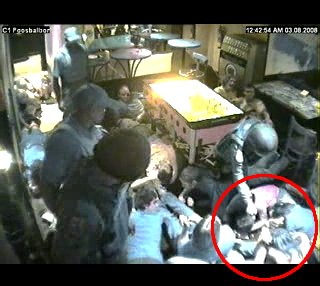 I was shocked to hear one of the girls interviewed on TV say that the police told them to “sleep, sleep”. Where did they learn that phrase? The reason I ask is because I have heard that curious wording only once before, ever. It is hard to forget, because the surprising turn of phrase came from the three armed men who tied me up and robbed me blind last year.

While we’re on the subject of my own robbery, two things seem relevant. One is that a radio call came in while the police were taking my statement, describing a robbery in progress three blocks away. The description of the suspects matched my attackers. I said so, expecting the half-a-platoon that attended the scene to jump in their cars and give chase, but no. They showed no interest whatsoever. I did receive a call from the police six months later. They hadn’t caught anyone, and they hadn’t found my car. They didn’t need any more information either. They just wanted to check whether I had, in fact, reported an armed robbery. They were working on it, they said. Yeah right.

Cut to KwaZulu-Natal, where a bunch of students had been making unreasonable demands, and even after they were met, carried on protesting and burning rubbish in the streets. Don’t get me wrong. They deserved to be locked up, the lot of them. They deserve to be expelled, too. Taxpayers’ money is wasted on their future.

Then the “adults” arrive, in the form of riot police. I was transfixed by the television coverage. What I saw was not a crowd-control scene, with lines of riot police in shields and helmets deftly splitting the crowds, driving them back and isolating the troublemakers. It was like something out of a war movie. Stun grenades were fired haphazardly into a crowd, not to drive them back, but apparently to confuse and panic them. Sure-fire recipe for trampling, that is.

At another location, a fellow who’d seen too many urban warfare cut scenes was sniping at running protesters with rubber bullets. Guy runs across an alley, a block away, and gets one in the side for having the effrontery to flee. Gotcha! Another officer stood firing down at students scrabbling through a ditch, trying to get out of the line of fire. No wonder serious injuries were sustained. It wouldn’t have surprised me if the crowd had turned really ugly, and felt itself fully justified to shoot back at the police, over such aggression.

Who trained these idiots? Isn’t there anyone in the police service that’s dying from shame at all this? Surely there are competent police officers, with adequate training, who can handle mild student protests, petty public-nuisance complaints or a minor drug bust without charging in all guns blazing like Rambo on acid?

There can’t be all that many criminals in South Africa, judging by the number of prior crimes that newly arrested criminals appear to have committed. Instead of budgeting for bulking up numbers and equipment, as the government has done, perhaps the crime rate — and the security of our would-be 2010 World Cup visitors — would benefit rather more from decent training.

Start with a fitness programme (hint: fatties can’t chase criminals, and weaklings can’t fight them). Then add some firearm training (hint: you can’t fire live ammo in crowded pubs, and you don’t point loaded weapons at unarmed patrons). Then perhaps a course on basic procedures in dealing with civilians (hint: you can’t grab her tits, you can’t Mace people who are already down and quiet, and you can’t slap bystanders into hospital). Teach public-order cops to restore public order (hint: don’t panic a crowd, don’t anger it by shooting fleeing protesters in the back, and don’t turn an unruly protest into a major war zone). Add to that some tips on how to at least pretend to want to catch criminals.

This isn’t a computer game. You aren’t special forces in an urban war. Just wearing a uniform and drawing a salary and bribing the public and speeding on public roads and going on strike once in a while doesn’t make you an effective police officer.

Finance Minister Trevor Manuel promised money for more men and equipment in his budget speech. But before we create any more “kitskonstabels” and issue them with live ammo, perhaps it might be a good idea to invest some public money in training.

The public invests our police force with awesome powers. Not the state, or the law, but the public — the woman who was pepper-sprayed, the guy who was deafened, the woman who was punched in the face, the woman who was “body-searched”, you and me, and the thousands of other victims of police negligence, incompetence, indiscipline and outright brutality. Many of whom don’t have CCTV cameras or fancy video phones to record the evidence.

We invest the police with awesome powers. If they abuse those powers, perhaps they should be taken away. If they demonstrate sheer incompetence, violent arrogance or blatant disregard for the law they’re sworn to enforce, perhaps those powers should be taken away. I would have thought South Africa has had enough of the state’s jackboots stamping on the faces of innocent civilians.

Which brings us right back to the argument for private police forces, subject to competition and contract obligations. Another comment on the original post said it’d be a bit like the Wild West. Well, what does all this look like? All the Bohemian needed was a pair of swinging saloon doors.

But failing private police forces, can we at least train the idiots we have, before we hire more incompetent bullies with inferiority complexes and issue them with assault rifles and a licence to assault? Before anyone else gets hurt?

(This was first published on my own blog.)