Today, Business Report, which is inserted in a number of Independent Newspapers daily publications across the country, carries a censored advert on its back page from the End Occupation Campaign (EOC). The ad was censored by the newspaper company.

The EOC — a coalition of Palestine solidarity groups, faith-based organisations such as the South African Council of Churches and Muslim Judicial Council, the ANC, Cosatu, SACP and various individuals involved in culture, sports and academia — will be holding a protest next week outside the Israeli embassy in Pretoria. The campaign decided to place an ad in Business Report to publicise the protest.

An EOC spokesperson told me that its experience has been that its events do not receive “sufficient” coverage in the media because the media are afraid of the Zionist lobby in South Africa. It quoted, for example, its “week of action” in June when a march of 15 000 people, a rally of 3 000, an unprecedented placard demonstration by about 200 MPs (including many Cabinet ministers) and other activities got scant mention in the media.

Earlier this week, the advert was submitted to Business Report. Yesterday, someone from the advertising department wrote to the EOC, saying the EOC’s picture would not be placed with the advert. The picture is of a Palestinian family of four, mother holding the child’s hand and looking at an Israeli soldier who has his gun pointed at the child.

“As per discussion with Gilbert Thies, sales executive from Pretoria News, we can unfortunately not place the picture with your advert in the business report on 23/11/2007. The reason for this is that Pretoria News is a family newspaper and some of our readers may be offended by this picture.

“Hope you find the above in order.” 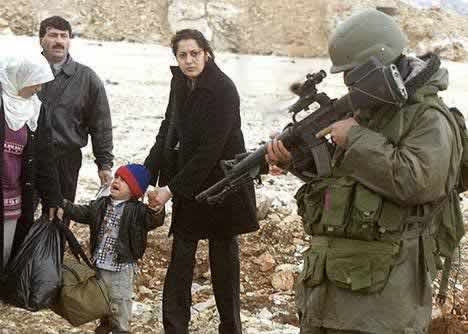 Excuse me, a “family newspaper” cannot use such a picture? What nonsense for an excuse! It should be ashamed that it can’t come up with a better excuse than that! I suppose the Pretoria News, as a family newspaper, never runs anything offensive to any of its readers. Talk about courageous journalism!

Of course, the EOC did not “find the above in order” and asked to cancel the advert. After much toing and froing, Business Report then agreed to run the advert with the picture. It would, however, include the word “Advertising” at the top of the ad (as if anyone could mistake this for being Independent Newspapers’ editorial!). Further, it wanted a word changed in the first line. The original copy had said: “Imagine murderers with weapons taking over your home and occupying it …” Business Report insisted the word “murderers” be replaced by the word “people”. (According to the EOC person I spoke to, one of the advertising people told him this instruction came from the editor of the Star, Moegsien Williams.) I suppose its “family readers”, in a country plagued by violent crime, would be offended to see the word “murderers”.

It is disgraceful that a newspaper in our country practises censorship in this fashion. Clearly, the story about family newspapers is hogwash; Independent Newspapers simply does not want to upset its Zionist readers and advertisers and is bowing to pressure. When Palestinians are constantly denied a voice or when their voice has constantly to be softened or watered down, one would expect the media to allow for that voice to come through.

Instead, we see blatant censorship (even when friends of the Palestinian people want to pay for those voices to be heard) and, more often, the appeal to hear “both sides of the story”.

I wonder whether Moegsien Williams and his Independent friends would have objected to using the words “murderers” to describe the perpetrators of apartheid in South Africa. Why is it that the butchers of Deir Yassin and 152 other Palestinian villages that were razed to the ground and whose inhabitants were brutally massacred from 1947 to 1948 cannot be called “murderers”?

And I wonder whether those at the SABC who constantly insist that they cannot have a Palestinian viewpoint on air without also having the “other side of the story” would have felt as strong a moral discomfort if they, in the 1970s or 1980s, had run a story about the oppression of black people without bothering to “get the other side”.

I must add that I also think it shameful that the EOC buckled under the pressure and allowed its advert to be amended and softened. It should apologise to its supporters who coughed up the R45 000.

But, Independent Newspapers has convinced me of one thing: I will have to be at the Israeli embassy next Thursday at 3pm. Censorship must not allow alternative voices to be silenced. And, later that evening, I will make sure that I will be at Unisa, where the United Nations will be holding its “International Day of Solidarity with the Palestinian People”.

The text of the (original) EOC advert is below:

Imagine murderers with weapons taking over your home and occupying it, living there against your will and expelling your children from your own home? Would you tolerate it? And if they do it to others, would you standby and do nothing?

The State of Israel has occupied the lands of the innocent Palestinian people for 60 years, removed over 6 000 people by the use of sheer force and terror. These people are refugees in other lands wanting to return home. Will you try to help them?

Shouldn’t we be collectively demanding that Israel ends its apartheid occupation of the land of these innocent people, that it removes its apartheid wall and allows refugees who were banished from their homes to return home?

By now you’re probably thinking: “I’m only one person, what can I do to stop injustice on such a scale?” You think that you can’t do much. However, you may be surprised by the impact of each of us doing a little together. You’re not about to go to war. No you’re not asked to take up arms. All that is asked of you is that you bring your friends and families and join this peaceful demonstration at the Israeli Embassy on the 29th November, which is also the ‘United Nations International Day of Solidarity with the Palestinian Peoples’, who were robbed of their land by the brutality of Israel, aided by the British, Americans and others, via a UN Resolution

This demonstration is intended to highlight the fact that we South Africans and others are opposed to the Apartheid Occupation of the land of innocent people.

I know you’re busy but sometimes you have to take time off to do what is right and just. How much of your day do you contribute to furthering the call of JUSTICE and peace? We don’t realize how powerful the effect of a small effort can be. Let’s make this special effort to be there and please invite others to join in.

PS. Posters, Placards, etc will be available at the venue

* PS: Like all my other posts on Thought Leader, this one does not purport to represent the views of the Freedom of Expression Institute and the FXI does not necessarily agree with any of what I have said here.