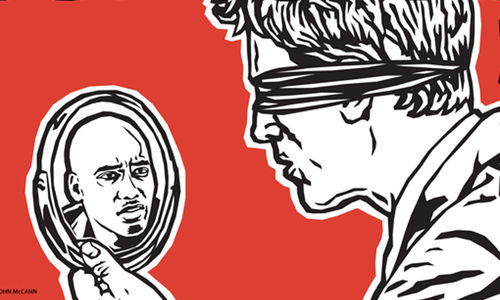 How do we fight racism when our schools are racially disintegrated?

The brutal killing of a black man by the police force in the United States of America evoked in me what Chabani Manganyi noted in his seminal book Being Black in the World. In this book, Manganyi argues that there are two interwoven existential realities of being black—one positive and the other negative. About the negative one, he says: “…we recognise the fact of a specific form of suffering– that of having been a colonised people. It stands to reason that part of our consciousness of being black people amounts to a mutual knowledge of this suffering at the hands of white domination.” To assume that racism is confined to structural segregation will be an act of ignorance and peril—it’s both psychological and subsequently behavioural on the part of its advocates.

The psychological effect of racism means that its carriers take it wherever they go—informing their choice of stores at which they buy, the schools they choose to send their kids and the people they choose to hang around with. The reality is that the black ‘suffering’ to which Manganyi refers remains a pronounced feature of South African society.

To validate this, look no further than the incident involving two Afrikaner farmers who forced a Black man into a coffin and threatened to kill him. Notwithstanding the progress made, racism still reigns supreme even in some of our higher learning institutions. A classic example is a recently published research paper in  the South African Journal of Science drawing empirically empty assumptions about Black students. In the ‘Let’s talk about workplace racism’ opinion piece by Tshidiso Tolla, we learn about the kind of hostility, motivated by racism, to which our young Black professionals continue to be subjected in the country’s corporate world. While other forms of racism are easy to pick, others are so subtle that it will take an acutely trained eye to notice them.

Because schools and society coexist, they too haven’t been immune to acts of racism, this is spite of global efforts to combat it. In South Africa, we have had a fair share of racism cases emerging in some of our schools, especially former Model C schools. For instance, a school in North West was accused of progressing White learners while failing the Black ones. In some of these schools, a surge in numbers of Black learners over the years— due to their perceived academic superiority— has had the unintended consequences—a sharp decline in the number White learners. Instead of diverting their learners to other predominantly white schools at the sight of more Black learners, some of these schools responded by sharply increasing their tuition fees as a deterrent to Black parents.

These schools resort to these absurd practices owing to the assumption that the influx of Black learners will result in sudden lowered academic standards, one publication noted. In my current neighbourhood, there are two former Afrikaner schools that are populated by learners from Black and Coloured communities. Is it coincidental that White learners migrated elsewhere when the Black ones moved in? I doubt. In the eyes of some of our white counterparts, a Black person represents nothing but crime, unruliness and stupidity—something the White community parents don’t want their children to experience in a school setup. The assumption here is that a White kid isn’t capable of such.

Having attended Blacks-only rural schools in Qwaqwa my entire life, the closest I have come in contact with White people was through television. This left me with the impression that whiteness exclusively equated to brilliance and holiness. Because of this, my initial interactions with my White South Africans often gravitated towards what I call ‘racial romanticisation’—thinking nothing bad would ever come out of them. Getting closer to them, I realised that the only feature that separates us is our skin pigmentation—otherwise, all of us are human.

I can only imagine how many other learners, as was the case with me, haven’t had  adequate prior exposure to other racial groups and how this will affect their interaction with these groups. Eliminating racism is already a daunting task even amongst racially integrated school settings; how much more when different people from different racial groups meet for the first time? The majority of our township and rural schools still boast almost exclusively Black learners, while previously ‘Coloured ‘and ‘Indian’ schools have managed to enrol a sizeable number of Black learners. However, White learners are mostly absent in these schools. With such an unfavourable reality, how then do you begin to build a non-racial country when the schooling system is disproportionately integrated in terms of race?

Racial integration in our schools, public or private; urban or rural, means racial stereotypes that still exist will be challenged and hopefully eliminated. This because learners will spend more time with people who do things different to them. In psychology, this phenomenon is referred to as contact hypothesis. Simply put, it means that— given the right environment—regular contact between people from diverse social backgrounds tends to reduce bigotry and promotes better intergroup relations. Consequently, they will learn to adapt to unfamiliar social settings that will open them up to embracing multiculturalism.

Defeating racism, by all racial groups, isn’t something that will happen overnight. It will require a change of heart. As Black communities, it will require that we do introspection on how we act with and around each other. As White communities, it will require that we interrogate the basis of our own fears around and hate towards Black people. As teachers, we must interrogate our own racial prejudices and use any available learning opportunity to learn more about other racial groups.

As Jonathan Jansen argued: “Places of learning, both formal and non-formal, must be charged with telling stories of both despair and hope, of oppression and freedom, of reconciliation and social justice, of struggle and responsibility, of fairness and forgiveness, of ethnic nationalism and non-racial solidarity.”