Hello, is there anybody out there?

Excuse me while I rant. Watching SABC Africa last night I came across a story about Fifa officials preparing to visit Zimbabwe to assess the country’s capacity to host fans from the 2010 World Cup.

Then, yesterday morning, I found the equivalent story online, which you can read here.

I can’t believe that with Zimbabwe facing economic meltdown and soaring inflation, which has left many Zimbabweans destitute and starving, resulting in an ever-growing humanitarian crisis and a flood of desperate refugees into neighbouring countries, that we can sit here and talk about Zimbabwe’s plans to cash in on 2010.

The story quotes the Zimbabwe Tourism Authority chief executive Karikoga Kaseke stating that Zimbabwe plans to spend $67-million on hotels and infrastructure before 2010. Are you kidding?

People are starving and this country is being ruled by a brutal dictator (and SADC lacks the balls to stand up to him). All we can think to talk about is opportunities presented by 2010.

So while Fifa delegates get to visit swanky five-star hotels and tourist meccas like the Victoria Falls, everyone will remain stumm about the crappy reality on the ground in Zimbabwe.

“It is either you prove your worth or they move to the next country. Don’t tell them we have this problem and the other, tell them what you can do for them,” said Tourism Minister Francis Nhema.

Exactly my point. Let’s just ignore the reality on the ground; maybe it will go away. Not likely. 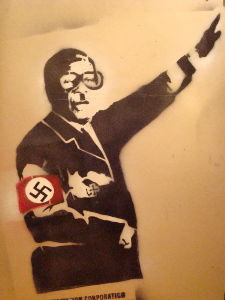 Just a note on the image, it is a photo taken of a painting by a guy called Jason Bronkhorst, which was at a friend of mine’s house. You can check out Jason’s other work on his blog here